The garden tour was organized to highlight the importance of the garden to the Laotian community. The Laotians hope to be able to preserve the garden even when the construction of the Bottineau LRT and related development comes. Continue Reading 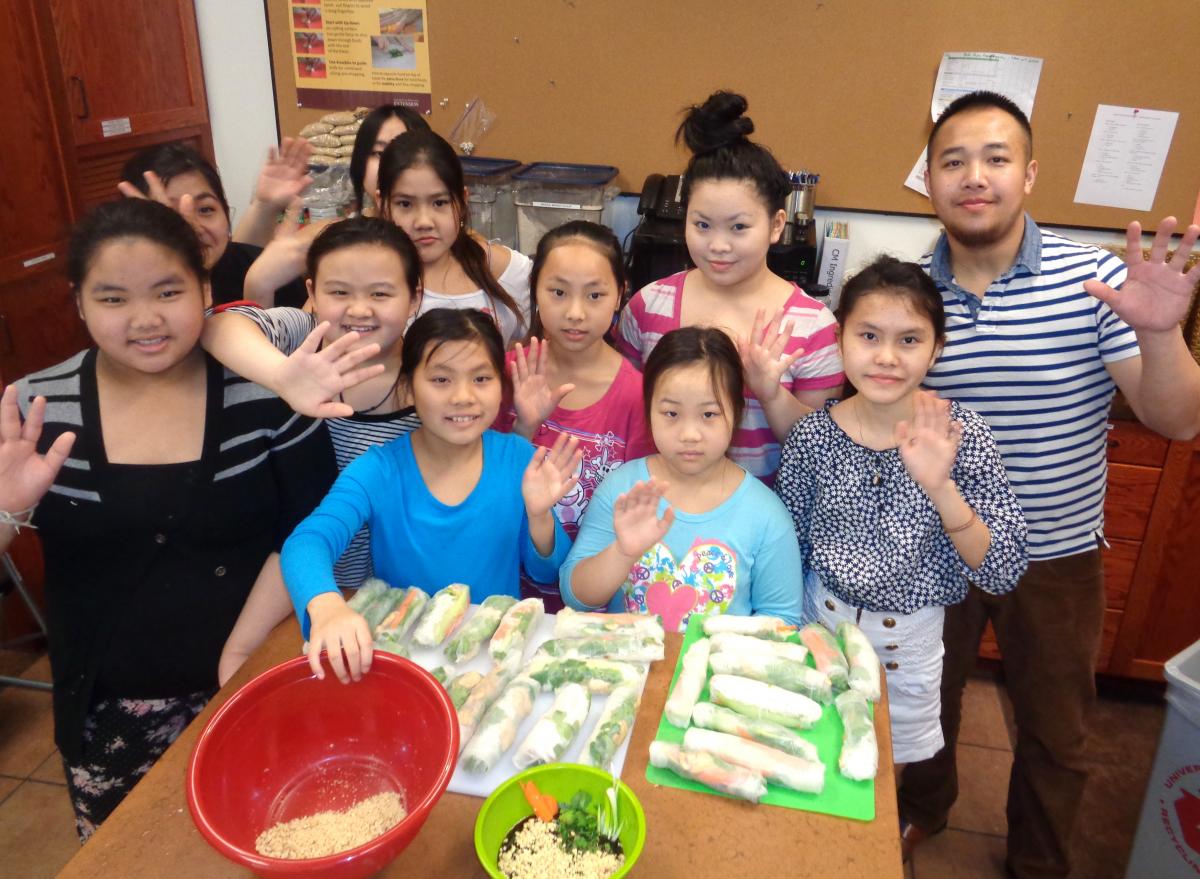 University of Minnesota tutors and volunteers took a group of 25 North Minneapolis Hmong refugee youth out trick-or-treating last Friday.This is a Community Voices submission and is moderated but not edited. The opinions expressed by Community Voices contributors are their own and do not necessarily reflect the opinions of the TC Daily Planet.The tradition of taking Hmong refugee kids out trick-or-treating started in 2005. A group of Hmong refugees had just arrived in the United States from a Thai refugee camp. One day they reported hearing the strangest story: That one day out of the year, they could walk up to someone’s house, mumble some noises, and the person would throw candy at them.These Hmong refugee students said that of course they were way too sophisticated to believe such a ridiculous story. We told them it was true, and took them out for their first Halloween trick-or-treat in their lives.Every year since then volunteers have taken Hmong refugee students out for Trick-Or-Treat.This year, 25 refugee youth put on face paint in the basement of St. Continue Reading

On August 7, councilmember Cano met with over 50 family members living at 2909 Bloomington Ave. S., to hear about safety concerns and work with residents to get problems fixed.This is a Community Voices submission and is moderated but not edited. The opinions expressed by Community Voices contributors are their own and do not necessarily reflect the opinions of the TC Daily Planet.Also participating in the meeting was Minneapolis police officer Abubakar Muridi, along with several other MPD officers and staff, and board members from the East Phillips Improvement Coalition.2909 Bloomington soccer players tell councilmember Cano they would like a soccer goal, basketball hoop in backyardBefore the meeting, councilmember Cano was given a tour of the backyard by soccer players living at 2909 Bloomington. They talked about problems with cars speeding down the alley, and said they would like a fence put up to separate alley car traffic from the youth playing in the back yard. They also hoped for more green grass, a basketball hoop and a soccer goal, a bigger playground, and speed bumps.2909 Bloomington families hope to replace this backyard dirt and rocks with green grass and a fenceThe soccer players then escorted councilmember Cano into the front lobby of 2909 Bloomington, where over 50 residents young and old talked with the councilmember about problems plaguing the building and surrounding neighborhood.Minneapolis police officer Muridi and councilmember Cano talk safety with 2909 Bloomington familiesMost of the complaints focused on safety and security. Continue Reading

Since the early 1990’s, a thriving community of Minnesota Kurds has grown  around the Moorhead area, and today numbers more than 1100.  Most of the Minnesota Kurds are from Iraqi KurdistanOn July 3, a group of Minnesota Kurds gathered at the offices of the Kurdish Community of America in Moorhead to talk about their lives in America, their worries for their relatives in Iraq, and their hope for an independent homeland as Iraqi Kurdistan faces attacks from ISIS extremists and deals with the challenges of harboring over a half million war refugees from Iraq and SyriaFor these Minnesota Kurds, their most immediate concerns are for the safety of their relatives back in Iraqi Kurdistan.  When ISIS extremists swept across northern Iraq less than a month ago, the Iraqi army crumpled and melted away, leaving the Kurdish Peshmerga army alone to face the ISIS fighters.So far the Peshmerga have held firm against ISIS, but relatives of the Moorhead Kurds talk of ISIS attacks along a 600 mile front every day.  All the Moorhead Kurds in the KCA office  have relatives serving on the Peshmerga front lines.  One relative was wounded in action near Kirkuk, hit in the abdomen by an ISIS sniper’s bullet.  Another Minnesota Kurd has a father who is  a Peshmerga general, serving near Shingal.  She shared her relative’s story about a Sunni sheikh who fled ISIS controlled territory and took refuge behind Peshmerga front lines.  ISIS demanded that the Peshmerga turn over the sheikh.  When her father and other Kurdish commanders refused, ISIS shelled Peshmerga positions, killing several Kurdish soldiers.Billions of American dollars were spent arming the Iraqi army.  Piles of those weapons were abandoned by Iraqi soldiers as they melted away, and relatives are telling the  Moorhead Kurds that  ISIS is now using this state-of-the-art heavy American weaponry against the often older and lighter arms of the Peshmerga.The Minnesota Kurds also reported that  Iraqi Kurdistan has taken in over 500,000 war refugees from both Syria and Iraq.  Often the refugees come from religiously and ethnically oppressed communities threatened by extremists with destruction:  Christians, Yazidis, Turkmen, Mandeans,  and even some of the few Jews left in Iraq have found shelter in Iraqi Kurdistan.  Relatives have told the Moorhead Kurds  that  the refugees are crowded into camps, schools, administrative buildings and shopping centers.  Combined with the war raging a short distance away, relatives are telling the Minnesota Kurds that  the Iraqi Kurdistan infrastructure is cracking under the stress: often there is no electricity and no running water, gas and other basic needs have tripled in price,  gas lines now can be over a mile long, and some basic foods have disappeared.The Moorhead Kurds said that while Iraqi Kurdistan has made great economic progress since the American interventions, the  continuous upheavals of rebellions, massacres, suicide bombings, ethnic cleansings and demolitions of mosques and churches in the rest of Iraq threaten to also drag down Iraqi Kurdistan.  For many Americans the Iraqi intervention has been a mistake and a disappointment.  But The Moorhead Kurds quickly pointed out that in one part of Iraq  the  American dream of a prosperous, tolerant, peaceful middle eastern democracy has largely been achieved:  Iraqi Kurdistan.The Moorhead Kurds said that Iraqi Kurdistan is the one part of Iraq to have used the opportunities provided by the American protection and intervention to build modern  institutions and infrastructures:  a functioning legislature, free elections, relative peace, and a booming economy with skyscrapers dotting the skyline of  Erbil and oil pipelines running from Iraqi Kurdistan through Turkey.  The Moorhead Kurds said this was in spite of the antagonism of the Iraqi Maliki government, who earlier this year cut off revenues for Iraqi Kurdistan.The Moorhead Kurds also stressed that The Iraqi Kurds  have a secular society:  that most are Sunni Moslems, but there are also Kurdish Christians, Yazidis, Shiites, and Jews.  They said that what bonds them together is their language and culture, not their religion. The Minnesota Kurds view  Iraqi Kurdistan as a Middle East island of toleration, moderation and democracy.Given the unending upheavels engulfing  the southern 2/3 of Iraq,  the Minnesota Kurds said that the only way  to protect this Kurdish success is for  Iraqi Kurdistan to break away from the rest of Iraq and become an independent nation.They said that many Minnesota Kurds want to go to Iraqi Kurdistan and help their families in this hour of need and hope.  But they also emphasized that they thought the best way for the Minnesota Kurds to help was not to pick up a gun, but to pick up a pen and tell others the story of the Iraqi Kurds, and urge elected officials to support an independent Kurdistan.The Minnesota Kurds in the KCA office also  told their own stories of how they ended up in Minnesota. Continue Reading

On June 12,  50 family members living at 2909 Bloomington Ave S. met with Minneapolis police officer Mukhtar  Abdulkadir to find solutions to crime and safety problems that have been plaguing their neighborhood and their building.The people living at 2909 Bloomington Ave. S. are predominantly Somali, and many residents speak limited English.  In the past the  language barrier has often meant that some residents have not contacted the police to report crime problems, and when they do they often feel the police do not understand them and are slow to respond adequately.Meeting with officer  Abdulkadir was the first time many of the residents have talked in their native language about their crime and safety problems with a police officer.  They explained  in detail to officer  Abdulkadir what was happening in their neighborhood and in their building.  Their biggest complaints were about intruders who on a daily basis get  into their building and:*Sleep in the front lobby and stairwells overnight*Sneak  into the underground garage and break into cars*Sell  drugs in the building*Urinate in the hallway*Kick in windows in the middle of the night*Smoke in the stairways*Sneak downstairs*Knock on people’s doors in the middle of the nightResidents also said that prostitutes regularly walk  the sidewalk outside their building, and even get into the building and ply their trade downstairs and in the stairways.Families also talked about concerns they had for the safety of  their children. Scores of children live at 2909 Bloomington, and every day dozens play in the  open space out back.  Their play often spills out into the alley.  Parents said that many drivers speed through the alleys at 30 mph+, and suggested that their children would be safer with a fence separating the play area from the alley traffic.  After hearing the lengthy and passionate descriptions of the intrusions and problems, Abdulkadir  offered some  advice.  He said that the problem with the intruders was so huge and endemic, he thought that security inside the building was necessary to get them out.  He also said that working security cameras were a must.Abdulkadir  also said he was ready to continue working with them to successfully deal with their crime problems.Officer Abdulkadir encourages soccer players, thanks soccer coachOfficer Abdulkadir  also told the families about how he became a Minneapolis police officer, and encouraged the youth to consider a career in law enforcement.  He praised  youth involvement in the East Phillips soccer team, and thanked the soccer coach for his efforts.While frustrated by the crime problems in their neighborhood and building, the families felt heartened after their meeting with Abdulkadir, and appreciated having a police officer they knew who could speak their own language.  They looked forward to working with officer Abdulkadir  and the Minneapolis police department to solve their problems and help make the Phillips neighborhood safer for everyone.The families also hope to meet with councilmember Alondra Cano Continue Reading