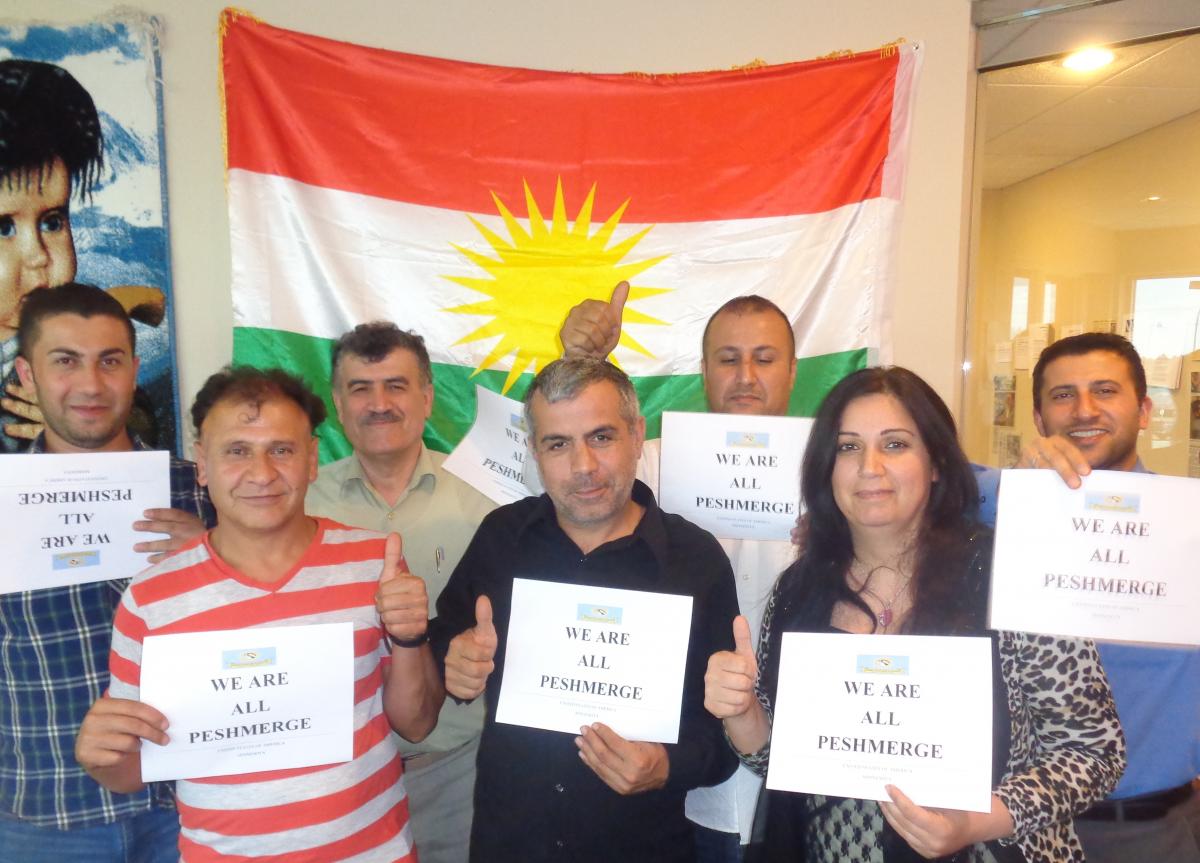 Since the early 1990’s, a thriving community of Minnesota Kurds has grown  around the Moorhead area, and today numbers more than 1100.  Most of the Minnesota Kurds are from Iraqi Kurdistan

On July 3, a group of Minnesota Kurds gathered at the offices of the Kurdish Community of America in Moorhead to talk about their lives in America, their worries for their relatives in Iraq, and their hope for an independent homeland as Iraqi Kurdistan faces attacks from ISIS extremists and deals with the challenges of harboring over a half million war refugees from Iraq and Syria 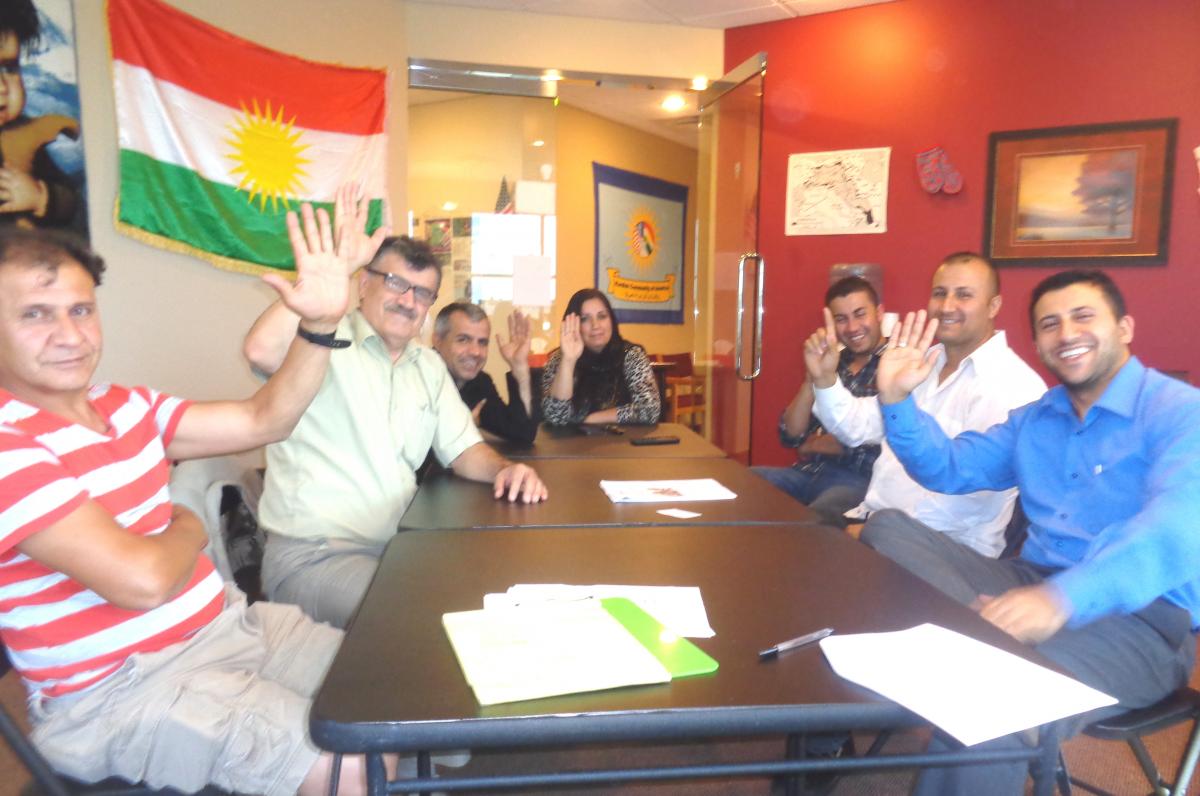 For these Minnesota Kurds, their most immediate concerns are for the safety of their relatives back in Iraqi Kurdistan.  When ISIS extremists swept across northern Iraq less than a month ago, the Iraqi army crumpled and melted away, leaving the Kurdish Peshmerga army alone to face the ISIS fighters.

Another Minnesota Kurd has a father who is  a Peshmerga general, serving near Shingal.  She shared her relative’s story about a Sunni sheikh who fled ISIS controlled territory and took refuge behind Peshmerga front lines.  ISIS demanded that the Peshmerga turn over the sheikh.  When her father and other Kurdish commanders refused, ISIS shelled Peshmerga positions, killing several Kurdish soldiers.

Billions of American dollars were spent arming the Iraqi army.  Piles of those weapons were abandoned by Iraqi soldiers as they melted away, and relatives are telling the  Moorhead Kurds that  ISIS is now using this state-of-the-art heavy American weaponry against the often older and lighter arms of the Peshmerga.

The Minnesota Kurds also reported that  Iraqi Kurdistan has taken in over 500,000 war refugees from both Syria and Iraq.  Often the refugees come from religiously and ethnically oppressed communities threatened by extremists with destruction:  Christians, Yazidis, Turkmen, Mandeans,  and even some of the few Jews left in Iraq have found shelter in Iraqi Kurdistan.

Relatives have told the Moorhead Kurds  that  the refugees are crowded into camps, schools, administrative buildings and shopping centers.  Combined with the war raging a short distance away, relatives are telling the Minnesota Kurds that  the Iraqi Kurdistan infrastructure is cracking under the stress: often there is no electricity and no running water, gas and other basic needs have tripled in price,  gas lines now can be over a mile long, and some basic foods have disappeared.

The Moorhead Kurds said that while Iraqi Kurdistan has made great economic progress since the American interventions, the  continuous upheavals of rebellions, massacres, suicide bombings, ethnic cleansings and demolitions of mosques and churches in the rest of Iraq threaten to also drag down Iraqi Kurdistan. 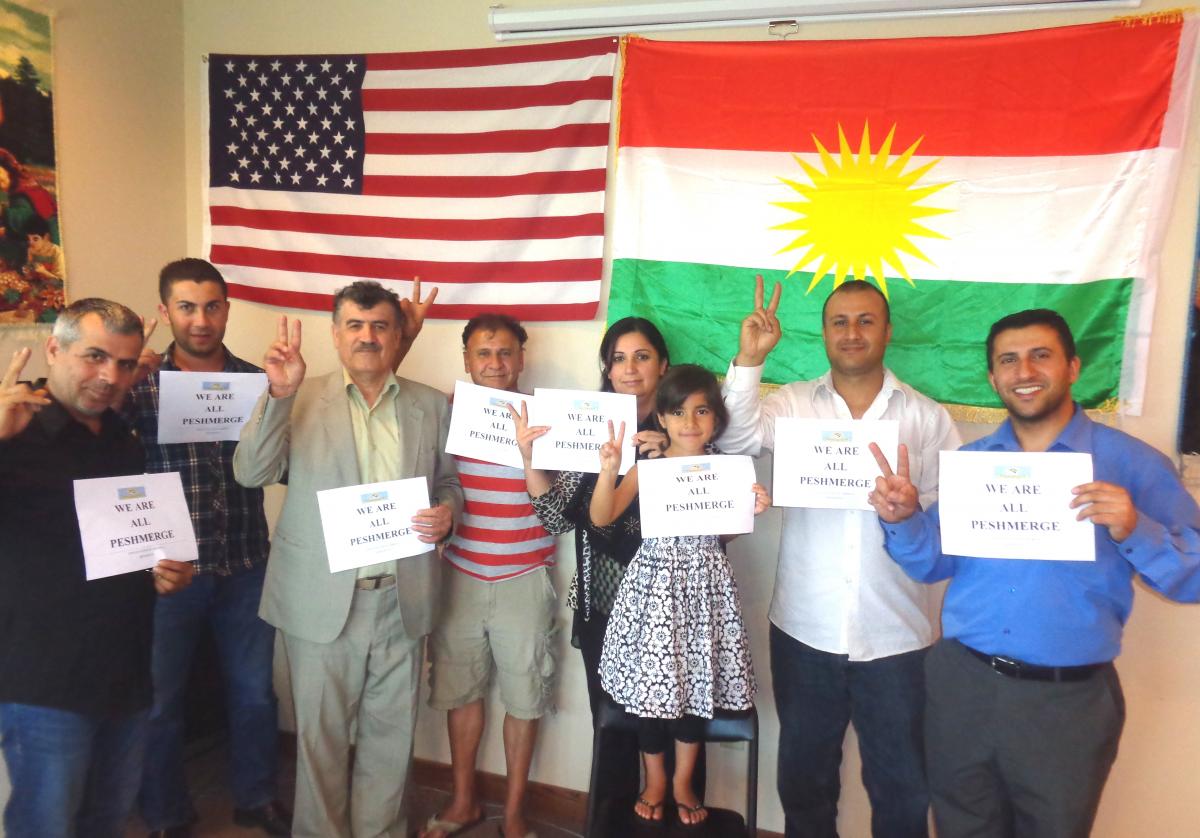 For many Americans the Iraqi intervention has been a mistake and a disappointment.  But The Moorhead Kurds quickly pointed out that in one part of Iraq  the  American dream of a prosperous, tolerant, peaceful middle eastern democracy has largely been achieved:  Iraqi Kurdistan.

The Moorhead Kurds said that Iraqi Kurdistan is the one part of Iraq to have used the opportunities provided by the American protection and intervention to build modern  institutions and infrastructures:  a functioning legislature, free elections, relative peace, and a booming economy with skyscrapers dotting the skyline of  Erbil and oil pipelines running from Iraqi Kurdistan through Turkey.  The Moorhead Kurds said this was in spite of the antagonism of the Iraqi Maliki government, who earlier this year cut off revenues for Iraqi Kurdistan.

The Moorhead Kurds also stressed that The Iraqi Kurds  have a secular society:  that most are Sunni Moslems, but there are also Kurdish Christians, Yazidis, Shiites, and Jews.  They said that what bonds them together is their language and culture, not their religion. The Minnesota Kurds view  Iraqi Kurdistan as a Middle East island of toleration, moderation and democracy.

Given the unending upheavels engulfing  the southern 2/3 of Iraq,  the Minnesota Kurds said that the only way  to protect this Kurdish success is for  Iraqi Kurdistan to break away from the rest of Iraq and become an independent nation.

They said that many Minnesota Kurds want to go to Iraqi Kurdistan and help their families in this hour of need and hope.  But they also emphasized that they thought the best way for the Minnesota Kurds to help was not to pick up a gun, but to pick up a pen and tell others the story of the Iraqi Kurds, and urge elected officials to support an independent Kurdistan. 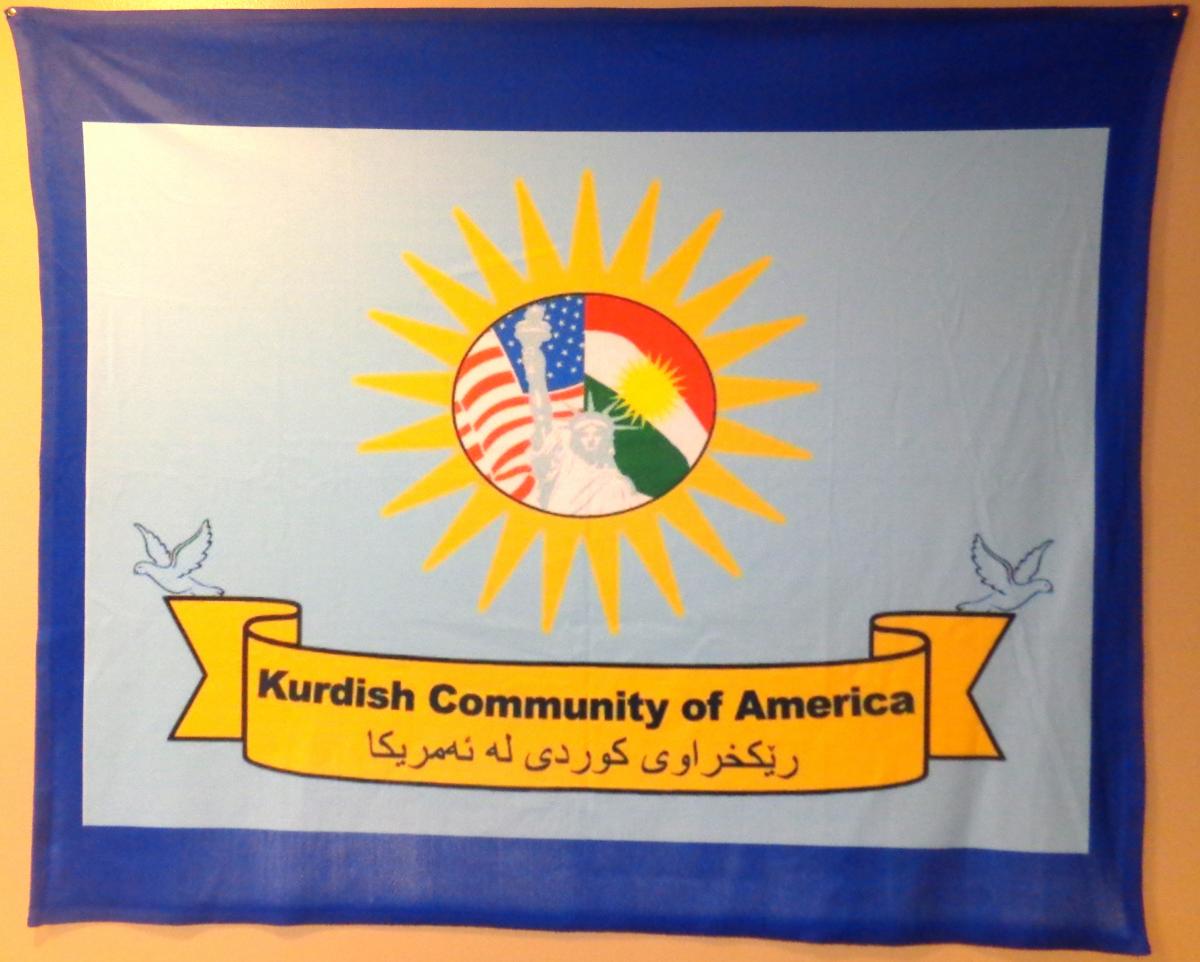 The Minnesota Kurds in the KCA office also  told their own stories of how they ended up in Minnesota. All those present during the meeting at the KCA office are from Dohuk province in far northwestern Iraq,  and most came to the United States and Minnesota from Turkish refugee camps in the early to mid  1990’s.  In the late 1980’s Saddam Hussein launched a ruthless campaign against the Kurds, killing thousands in chemical attacks at Halabja. and driving hundreds of thousands more into refugee camps in Turkey and Iran.

After years trapped in Turkish refugee camps, they  came to Fargo-Moorhead in the early 90’s to build new lives.  Lutheran Social Services helped them settle here, and the Kurds said  they were lucky because they were placed with local families who looked after them, showed them around and took them places, and helped them adjust to life in America.  Their sponsors were their first friends in America.  They say that what they like most about life in Minnesota is being safe, and what they would most like to change is all the snow.

The Kurds proudly talked about how they have repaid the American people and government for taking them in:  one served in the American military, and others served as interpreters for American forces in Iraq. And many of their relatives living in Iraq also served with the American occupation forces. Their said that their families in Iraq have received numerous death threats because of their family’s work with the Americans, and without the protection of Iraqi Kurdistan they would have feared for their lives.

The Moorhead Kurds have also heard about the Minneapolis Somalis who have been reported to have gone to the Middle East and enlisted in ISIS.  They worried that the Somalis had been brainwashed by extremists, and questioned why the Somalis were fighting in a country that is not their homeland.

Despite the stories from their relatives of the terrible conditions in Iraqi Kurdistan and the military threat posed by ISIS militants, the Minnesota Kurds are proud of the successes of the Iraqi Kurds and hopeful that soon there  will be  an independent Kurdistan.

Note: I did not use names, because those who recruited for ISIS in Minneapolis are probably still in Minnesota, and all the Minnesota Kurds interviewed have relatives fighting ISIS.