Rosy Simas of Rosy Simas Danse is Haudenosaunee, Seneca, Heron Clan. She brings a Native feminist lens to the contemporary dance world with her body of work, the latest of which is “Weave,” a collaborative dance project. “Weave” will make its debut on Jan. 12 at the Ordway Center for Performing Arts, a co-commissioner in collaboration with The O’Shaughnessy.

The unseen is vital in “Weave:” connection to ancestors, place and the loosening of what audience members may conceive of as time. Through the tension of movement and stillness, light and the absence of light, the internal landscape is made visible through the accumulation of all these elements both on, and off stage.

Some of the ways in which Simas is making space for this to happen is deeply personal to the performers. They are not playing characters, Simas clarified, “I want people to be able to see that the performers are working from a place that is beyond the time of the moment that they are in … The person that is performing is bringing all of their history with them and that is everything from their family, their ancestors, their teachers, their lovers – all of those experiences have formed their bodies and their minds and their spirit.”

Simas is exploring multiple concepts in “Weave” that have engaged her over her long career as a dance maker, “Some of the things I’m most interested in, I’ve been interested in for 25 years, in terms of work … is the idea of listening: what does that mean? … One of the things that we’ve talked about in making ‘Weave,’ in particular, is, I said, in no way do I want to display conflict or violence. Or even struggle. The struggle happens all before and after,” Simas said.

“Weave” is more than a performance, it’s a project. Because Rosy Simas Danse is a nonprofit organization, “Weave” can reach beyond the immediacy of the stage. This includes free community engagement events including open rehearsals and the inclusion of local dancers as the project travels. “I feel like what we’re trying to do right now is connect and center Native voices in any way that we can,” said Simas.

The project will travel from the Ordway onto Birmingham, Alabama; Philadelphia, Pennsylvania; Kahului, Hawaii and Washington, DC, places where Simas developed relationships with places and people that informed the making of “Weave.”

Not all choreographers collaborate as deeply as Simas, according to local arts critic Sheila Regan, “[She] uses a collaborative process with a number of different artists that I think is really unique. The pieces are all very visually stunning to experience and usually, it’s not just like watching movement. It’s watching and listening and you’re feeling something as you’re going through the piece. Sensing.”

Heid E. Erdrich, who is Ojibwe enrolled in Turtle Mountain and a Twin Cities-based author, poet, interdisciplinary artist and educator, has collaborated with Rosy Simas Danse since 2014. She discussed the elements of place, “This is a really organic piece that is arising from place, Rosy’s visits, her relationship [to] space and people, particularly the land and the history of the land of the place that’s she’s working, as she’s creating it. So it’s very personal, in a way, but also very universal because it’s about the larger world, the living world.” 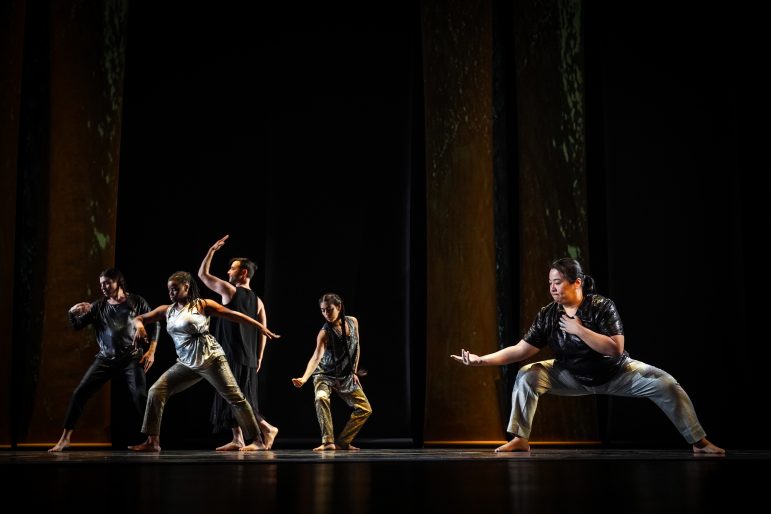 Performers on set at a rehearsal session. Photograph by Kelechi Uchegbu.

Erdrich has been curating the blog posts “by Native writers after they attend “Weave” open rehearsals and describes part of her role in “Weave” as being akin to a witness. In addition to being a founding board member of Rosy Simas Danse, Erdrich is a writer for “Weave”, whose words are also used as material for Simas to draw from, though they make take on new forms in the production.

“Weave” is a project that explores relatedness, explained Erdrich, “How do you begin to relate to a place, how do you respect a longtime relationship to places, how are we present in our bodies, finding a relationship to places many of us have been moved to – or had to move to or move from. And the performers are really diverse. They’re transnational adoptees, they’re indigenous, they’re immigrant, they’re Canadian, a variety of gender and sexuality identities as well as really diverse educations and experiences in the world so each person is distinctly creating their story of connection.”

For “Weave” performer Valerie Oliveiro, who was born in Singapore, water is her entry point, “Because: island people,” she said.

Oliveiro talked about “Weave” in terms of ancestors and the present moment, “Relationships really ground me and so in this work with Rosy, and the frames in which she has invited us to contribute into a lot of my personal relationships – not explicitly – but how I feel, my relationships with my ancestors. My grandmother, particularly, has been really manifesting and I’ve really gone into that relationship and savored that because I’ve missed her,” Oliveiro said. “And also just really contemporizing my experience, like really getting an update from myself on where I am now. Who am I in this situation? And maybe feeling like my feet are in two boats – it’s not a bad thing if those two boats are in calm water.”

Listening in motion
The concept of deep listening is central to “Weave.” Audience members may find themselves immersed in their own internal experience, aided by Richomme’s soundscape and the unfolding movements on stage. Erdrich describes this as a different way of listening, “Watching the performers create their work through Rosy’s direction is fascinating because they might listen with a bone, they might listen with a memory. And although the score is this beautiful, intense piece, that score is meant more for the audience than the performers. And the audience experiences it in a way that helps them understand where the performer’s dance came from,” Erdrich said.

Each performance will be its own site-specific iteration of “Weave”. For example, Twin Cities-based community performers will share the stage at the Ordway and the Mystic Wind Choctaw Social Dancers will play a role in Alabama.

Simas discussed her process of choreography in Alabama, “We were doing a mini-tour of Alabama through the Alabama Dance Council. We did 22 performances in schools and community centers and art centers throughout Alabama … We went to one particular place, where I didn’t end up performing because the venue was actually next to – and probably on top of – a Creole graveyard. And so the Mystic Wind Choctaw Social Dancers and I went out and offered tobacco and they did some prayers for those people.”

“That experience of being in that place stuck with me for the rest of that tour and I’d have to sing my solo which I had to perform five minutes of, maybe 10 more times, was completely influenced by that land that we were on. And it sounds a little mysterious but it really isn’t. There’s something that I think almost shifts in us on a cellular level when we are listening that deeply to what it is that is going on. And so I carry that experience with me into the work and also when I make the films that are in the work.”

Native labor, and the art world
Performer Sam Aros Mitchell, a Yaqui choreographer enrolled with the Texas Band of Yaqui Indians, is working on a PhD at University of California – San Diego. He and Rosy met on a panel for indigenous choreographers, and that led to an invitation from Simas to join “Weave,” which Mitchell said is a project that can be understood experientially. At 49 years old, he has had a “very full, very generous, very long career as a dancer,” but found new terrain while working with Simas.

“In some ways, it was something I had never really been invited to do before, which was a very subtle embodiment,” said Mitchell because the type of dancing he has done in his career has been characterized by “pretty full-on physicality, virtuosity and exhaustion.”

“There was a little bit of me having to overcome some of my own hang-ups about who’s invited to do this kind of work. I’m actually writing about this right now in my qualifying papers – the privilege of whiteness in these kinds of contemporary dance modes. Who’s invited, who’s not invited? A lot of times brown people are not really invited to this more – I don’t want to say ‘subtle’ but it’s a kind of way of working. Rosy’s really opened my eyes … [when she told me], ‘Hey, you were doing this a long time ago, before people started calling it the Feldenkrais technique or before people started calling it Alexander technique,’” said Mitchell.

One of the challenges that Simas has encountered in the scope of the administrative and marketing work that she has done is compounded by the extra labor of working to shift stereotypes.

“I really think it’s about triple the work because people are so inundated with stereotypes of who Native people are, and [have] such specific expectations of what they think that they’re going to see when they go to something that’s ‘Native’ dance that we have to constantly have to be thinking about how to shift that perception,” Simas said.

The nature of this challenge is of course not particular to “Weave” – it speaks to larger challenges that working Native artists face.

In terms of what Simas would love to see from non-Native people who are interested in “Weave,” she suggests starting by reading the “Weave” website blog entries by Native community writers.

“We’re in a tricky time because there is a desire from audiences to witness work – performance work – by Native artists and so there is a little bit of an acceleration happening right now, I think, which is good,” said Simas. “And, on the other hand, I would say this project did something to me which is the opposite of what I intended and wanted. It is such a large administrative-oriented project that it has isolated me.”

Which is all the more reason it is special when Simas can be with the entirety of her collaborating team. “Because half of the group is not from here – more than half – I really thrive in those moments when we are together,” she said, and she will get to enjoy that togetherness as they reconvene for the tour.

Community members recently had the chance to join in free community engagement programming at “Weave”: “Get Real: A Native Feminist Artists Dialogue” on Jan. 7 at All My Relations Art in Minneapolis, and upcoming is a free movement class with Sam Aros Mitchell on Jan. 10. It is open to all levels of learners but space is limited so please reserve a space by emailing info@rosysimas.com.

Tickets for “Weave” are available at www.ordway.org. Visit www.rosysimasweave.com for blog entries by Minnesota-based Native writers and more.