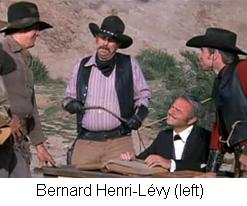 You’re a rich white man, and you’ve raped someone less important and more female than you are. And now the authorities are daring to treat you — yes, you! — as if you were some sort of common, middle-class rapist. Who can you turn to? Who will defend you? Who will fight for the rich, well-connected white rapist?

Strauss-Kahn, as you undoubtedly know, allegedly raped a maid in his penthouse hotel room; he was arrested by New York police while on a plane that was departing the country. Police say they have physical evidence tying Strauss-Kahn to the alleged attack, and what evidence has come out so far is damning; still, Strauss-Kahn is entitled to his day in court, and presumably a man who can afford a $3,000-per-night hotel room can afford a decent attorney.

Still, to hear Lévy tell it, this whole responding-to-credible-accusations thing is a travesty. A travesty, I tell you!

I do not know—but, on the other hand, it would be nice to know, and without delay—how a chambermaid could have walked in alone, contrary to the habitual practice of most of New York’s grand hotels of sending a “cleaning brigade” of two people, into the room of one of the most closely watched figures on the planet.

What I do know is that nothing in the world can justify a man being thus thrown to the dogs.

What I know is that nothing, no suspicion whatever (for let’s remind ourselves that, as I write these lines, we are dealing only with suspicions!), permits the entire world to revel in the spectacle, this morning, of this handcuffed figure, his features blurred by 30 hours of detention and questioning, but still proud.

This morning, I hold it against the American judge who, by delivering him to the crowd of photo hounds, pretended to take him for a subject of justice like any other.

I am troubled by a system of justice modestly termed “accusatory,” meaning that anyone can come along and accuse another fellow of any crime—and it will be up to the accused to prove that the accusation is false and without basis in fact.

Yes, anyone can just accuse anyone else of a crime! How dare we have such a system that lets a lowly maid accuse a Very Important Rich White Man of a crime! And now Strauss-Kahn will have to prove himself innocent. If only there were some principle in American law that would force the prosecution to prove its case. Alas, an Important Man will now go to jail unless he can prove these charges false.

And this judge! Treating un homme important as merely one of the common rabble! Doesn’t he know that alleged criminals aren’t supposed to be sent to jail to await arraignment unless they’re poor?

Lévy, however, is not content to merely attack the American justice system for its habit of letting commoners speak to the police; he also attacks alleged victims of Strauss-Kahn for not going to the police in the first place.

I hold it against all those who complacently accept the account of this other young woman, this one French, who pretends to have been the victim of the same kind of attempted rape, who has shut up for eight years but, sensing the golden opportunity, whips out her old dossier and comes to flog it on television.

Yes. She pretends to be a victim, because we all know how fun being a victim is. If she really was a victim, why wouldn’t she have come forward years ago, so people like Bernard-Henri Lévy could have attacked her for insulting a Very Important Man?

Lévy’s defense of Strauss-Kahn is breathtaking in its feverish bravado. It makes the defense mounted by Ben Stein look pathetic – well, more pathetic. But it is not surprising to anyone familiar with Lévy’s work. It is kin with Lévy’s defense of Polanski — overheated, outraged, and oblivious to the idea that rape is a serious crime.

What seemed likely after Polanski now seems quite certain: Bernard-Henri Lévy sees nothing particularly wrong with rape. At least not when the rapist is a Rich, Important Man, and the victim is not. That a woman — a common woman, like a maid, or a thirteen-year-old girl — can actually accuse an Important Man of raping her is seen as an outrage; after all, what offense did he commit, other than raping her?

Lévy sees rape as a trivial matter; what he sees as outrageous is the rest of us, who persist in viewing it as a serious crime. In short, for all his protestation that he is a great egalitarian, Lévy doesn’t care about the physical safety of half of humanity. He may call himself a leftist, but when it comes to gender politics, there is nobody more reactionary than him.