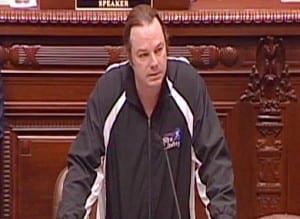 Bradlee Dean wasn’t supposed to give the invocation at the start of yesterday’s Minnesota House session.

Oh, I don’t mean he wasn’t scheduled, or was a last-minute replacement or something; all indications are that he was invited by Rep. Ernie Leidiger, R-Mayer to give the non-sectarian prayer that is a part of the House’s usual opening business. Dean was asked to be there, and he was allowed to speak by House Speaker Kurt Zellers, R-Maple Grove. Procedurally, Dean’s presence was perfectly kosher.

But Dean wasn’t supposed to be there. Not as far as the Minnesota Republican Party was concerned.

Oh, don’t get me wrong — the Minnesota GOP has a long and warm relationship with Dean. Rep. Michele Bachmann, R-Minn., has said that Dean and his You Can Run But You Cannot Hide ministry is “way on course. Because they get it. They get what this is all about.” Former Minnesota Secretary of State and current State Rep. Mary Kiffmeyer, R-Big Lake, once emceed a fundraiser for Dean, where she praised Dean’s group’s work prosthelytizing — illegally — at public schools. “They’re not ashamed of the Gospel of Christ, and their country, to preach it, and using that exercise of their freedom,” she said.  “When you’ve got folks like this going right into that educational system, don’t let them stand alone.” And former state representative and 2010 GOP gubernatorial candidate Tom Emmer’s campaign donated money to Dean.

This embrace was understandable. Dean is, somehow, a power player in the local Christian Dominionist movement. His fundraisers draw hundreds, if not thousands; he has his own radio show. He’s not a household name, unless your household happens to be extremely Christian; then you know him as a brave warrior for Christianity, going into schools claiming an anti-drug message and switching mid-program into a call to Christ. Despite being a self-proclaimed minister, recovering drug addict, and second-rate musician, Dean speaks to some of the most highly-energized members of the feverish fringe of the Republican Party.

But while Dean has been embraced, it’s been an awkward embrace, done in the shadows. Because Dean says, to be blunt, a lot of really horrible stuff. At the Kiffmeyer event, he called the Pope a false minister who sits on a liar’s throne. (I know. I was there.) He’s called for the execution of gays, and claimed homosexuals are responsible for the Holocaust. He’s accused Rep. Keith Ellison, DFL-Minn., of spreading Shari’a law in America. (Ellison was the first Muslim elected to Congress.)

In short, Dean belongs on the fringe of the fringe politically, and his beliefs are not exactly in line with those of mainstream Republicans, much less mainstream Americans.

So sure, Republicans would go on Dean’s radio show — it didn’t get that many listeners of the mainstream variety. They’d let him show up at tea party events. But by and large, they kept their relationship closeted, never exactly admitting to it. When Dean’s anti-gay comments came to light, Emmer, asked about it in a press conference, said, “I bought a table. That’s a non-issue. You got some information yesterday when I was on the road. Bradlee Dean, Jake… I met them a couple of times.” One of those times, Emmer did not mention, was at Dean’s house.

This was the pattern. Dean could be involved with the GOP — but on the periphery. Never front-and-center. His organization could have a booth at the GOP state convention — but Dean wasn’t going to be giving a speech. Dean might show up at tea party events — but he wouldn’t be showing up at Republican Party events. Only Bachmann — who answers to no Earthly logic — was willing to mouth anything but pablum when it came to Dean.

But that changed yesterday. Somehow, Dean was invited to give the invocation. And in what could only be a surprise to someone completely and utterly unaware of Dean’s modus operandi, he chose not to give a non-sectarian prayer.

I remember when I was a young man, I had a friend who founded a company in Fridley, Minnesota. This man built this company from the ground up as he blueprinted everything in great detail. He put his sweat, tears, everything into it to establish the company. Nobody understood what sacrifice he put into his company except them that helped him along. The company grew in such a proportion that he could now sell the company and he did. On the sale of his company the buyers agreed to keep him on to run the company for them, and in the process the company sold. And when it was sold, the buyers went against the contract and fired the founder. How foolish could they be? They thought once they had control of the company they could run it their own way and still prosper, and they failed miserably. [This is what would be called an “allegory,” if it wasn’t so heavy-handed it would make every English teacher in America cry. –jkf]

It sounds much like America today. America has the longest standing Constitution in the history of the world. And might I remind all of us here we have one Constitution, so let us come together and unite ourselves under its directives. Because we all know the problems didn’t come into our country in 1776, they came when we wandered from the founder of the company and tried running it our own way. So let us pray.

Honestly, by Dean’s standards, pretty tame. Of course, it’s completely factually wrong — Barack Obama is a Christian, after all. And it completely and utterly violates the House’s rules for chaplains, but it isn’t even the first time this year a nonsectarian prayer has been uttered by a chaplain at the Capitol. (Dean even reacted to that dustup on his radio show; he hosted the offending minister, Pastor Dennis Campbell. Referring to State Sen. Terri Bonoff, DFL-Hopkins, who complained about Campbell’s prayer, Dean said, “Maybe what we need to do is get her name eradicated [from the Senate]. She’s looking to get rid of who we are as a people, well then why don’t we help her possibly leave?”)

No, Dean’s words, while certainly not helpful and not proper for the floor of the House, did not alone make this front-page, top-of-the-newscast news. No, it was Dean’s presence. His very presence. That was the story.

Because the local media knows about Dean. They know about his relationship with the state GOP. But as long as the GOP kept Dean locked away in the closet, the local media was willing to ignore him, to keep his radical views separated from the GOP. Sure, the Minnesota State Senate might have just voted to put a state constitutional amendment on the ballot making same-sex marriage double-secret against the law — and sure, the House might have been planning to take that up yesterday, before the Dean kerfuffle — but the local media remained unwilling to connect the dots.

That changed yesterday. Because yesterday, Dean was front and center, praying in Jesus’ name in front of a Republican majority that had invited him. That is why Speaker Zellers quickly gaveled the House into recess and later resumed opening business from square one, including a new invocation. That is why Zellers took to the floor, saying, “I am offended at the presence of Bradlee Dean on the floor of the Minnesota House of Representatives. I denounce him, his actions and his words. He does not represent my values or the values of this state.” Because the GOP knows that if Bradlee Dean becomes synonymous with the state Republican party, their narrow majorities in the House and Senate will be gone after 2012. Their hopes of somehow getting Rep. Chip Cravaack, R-Minn., reelected in what will likely be a hostile 8th district are toast. Their hopes of ousting Sen. Al Franken, DFL-Minn. in 2014 (they’ve already given up on beating Klobuchar in 2012) are over. And their hopes of delivering the state for a favorite son — former Gov. Tim Pawlenty — are over as well.

Dean’s prayer was disastrous, not for what he said, but for who he is — an anti-gay, anti-Muslim, anti-woman, antisemitic, anti-social jerk who is actively working for a Christian-dominated government. That a man with his record could be welcomed by even one member of the Minnesota Republican Party to speak on the floor of the House of Representatives — well, that says more about the state of the Minnesota GOP than a thousand attack ads could.

What will be interesting is the fallout from this, for it will be swift and merciless. There were already rumors swirling that the GOP lacked the votes to get the anti-gay-marriage amendment through before the close of session, and this has intensified those whispers. Less important, but more fun for those of us who aren’t Republicans, Zellers’ necessary and forceful denunciation of Dean has itself been denounced by Dean, who said, “If Speaker Zellers does not stand for the Constitution, our veterans, the Founding Forefathers, and the Christian God to whom he swears by an oath to uphold these very things, then I would say Mr. Zellers is not fit to be the Speaker of the House of Representatives of Minnesota.”

That’s the problem for the GOP and for Zellers. Because Dean is not without influence. And while they had no choice but to go after Dean, there is also no doubt that this will anger conservative Christians in the Republican Party — a group that makes up a huge bloc of caucus-goers and foot-soldiers.

But that’s the problem with trying to embrace a bigot without being seen embracing him. You can run from him all you want. But you can’t hide from that choice, or from the consequences.