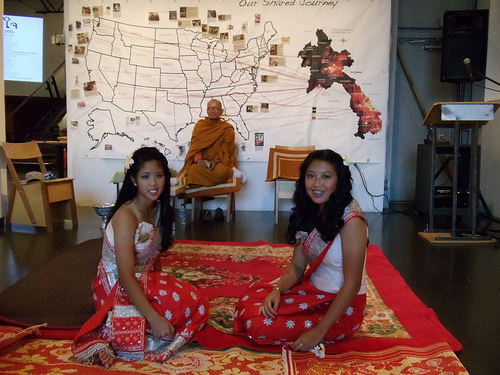 A war leaves many legacies.

This month, on July 11th, Secretary of State Hillary Clinton made a historic trip to Laos, the first time in 57 years. I tried to put it into perspective for my young niece, who was having a hard time wrapping her head around what it really meant.

When I try to explain to her that a Secretary of State hasn’t set foot in Laos for almost 6/10ths of a century, it clicks a little bit. When I tell her that her grandma was only 1 year old then, it clicks a little more. Halley’s Comet comes by only once every 75 years or so, in comparison.

I tried pointing out a few trivia facts.

That in 1955, Albert Einstein died that year and the war began between North and South Vietnam. Scrabble debuted and for the better part of the year, “Rock Around The Clock” was the #1 song. She looked at me like I was from Mars as I tried to sing the lyrics to her.

I even pointed out that Bruce Willis, Chow Yun-Fat and the inventor of Tae Bo were born that year, but I realized I was stretching.

So, I tried to break it down for her by pointing out that after 57 years, we’re supposed to be happy with a single day. Somehow, we have to hope in that in those 24 hours, everything that could be said, should be said, would be said amid all of the photo ops and the safe speeches, the symbolic gestures and efforts to observe diplomatic formalities.

There was once an old USAID worker named Ed Buell who worked in Laos during the war. He believed that anyone who spoke English in the country didn’t understand the real problems of Laos at all. It’s easy to see how someone might come to that conclusion.

I was born in 1973, the year the secret bombing in Laos stopped, a bombing campaign that would leave Laos the most heavily bombed nation of the 20th century. There are more bombs than people in Laos.

Almost 40 years later, we’re still trying to remove nearly 1/3 of the bombs that had been dropped on Laos because they failed to detonate properly. Thirty percent of the victims are children under twelve. Many of their parents hadn’t been born when the war ended. In the US, children sing about London Bridge falling down. In Laos, we have to sing songs not to touch any of the bombs that cover almost 30% of the Lao countryside.

A few months ago, I had a talk with some friends who wished I wouldn’t focus so much on the war or unexploded ordnance issues in Laos because it makes it sound like the whole country is covered in bombs, when it’s really a beautiful place, otherwise. They felt I should use my voice to speak more about the poverty in the rural areas and the need for education and good nutrition and modernization there. I could have drawn them the diagram between a family’s inability to farm or send their children to school safely because of the hazards of UXO, or the devastating effect trying to get a family member to the hospital can have on all of a family’s limited finances in those zones.

I tried not to laugh, but it seemed ridiculous to use a “half-full or half-empty” view that we’ve still got 2/3rds of a bomb-free country and somehow “that ain’t bad.”

I point out to my niece that much of the work being done today to rebuild Laos has come from people like her taking a stand. Of finding any way possible to get their voice heard, and to understand their rights to ask for solutions.

As my niece watches the pictures unfolding on the internet of Secretary of State Clinton’s visit, I can see she’s starting to process what it means to be Lao in the world. What it means to be an American, and considering why many of us embrace the term Lao American.  Why we might want to hold onto the best of our 700 years of tradition even as we rebuild in a 236-year old country. What we might bring to the great American tapestry, and what American ideas might flourish in Laos. I hope she can see that neither of our nations has employed perfect statesmanship over the centuries, but we can keep working towards it as an excellent ideal.

It’s thinking like that that I hope continues to be part of not just a peaceful legacy, but a growing legacy.