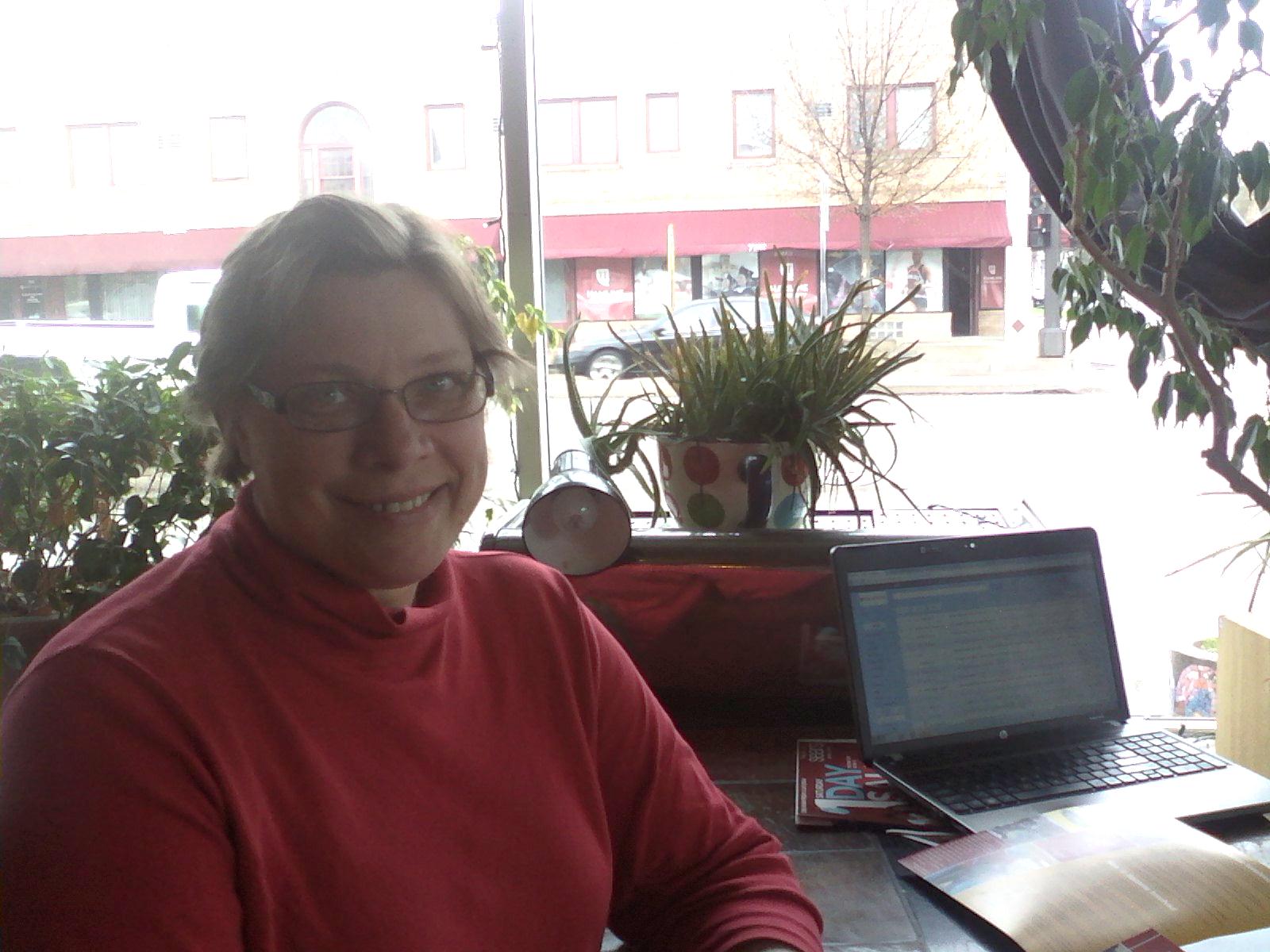 For twenty years, Kathy Sundberg has been the owner of one of the most interesting storefronts in St. Paul, let alone the Twin Cities.  There’s not one particular reason why Ginkgo Coffeehouse is so interesting and maybe that’s its standout quality.  I went there for the first time just this past week and it is clear that Ginkgo offers something for everyone.  One would typically notice the coffee menu and Ginkgo does have a large board filled with delicious coffee specialties and a full food menu with handmade breakfast, lunch and dinner specialties.  The prices are very manageable with different coffees ranging from $2 – $5 and sandwiches and soups similarly priced meaning that $10 will get you a long way.

The interior of the coffeehouse is decorated with a variety of seating.  Need a private table to focus on work?  Booths in the back or a table on the stage allow for space.  Need a bigger space for sharing plans with someone?  There are plenty for more than just a laptop.  Want to just sip away and mingle?  Ginkgo’s cozy atmosphere and friendly customers allow for just that.  Where many coffee shops seem to cater towards personal retreats via public space, Kathy told me Ginkgo Coffeehouse aims to provide an inclusive experience and a space for everyone.  And that is definitely true as folks were there for all sorts of reason, whether studying for final exams, taking some time to read for pleasure, or just to relax and enjoy some coffee.

Funny enough, while Kathy has been tending the space for such a long time, she originally had no business with the coffee business.  In fact, Kathy not only had no experience with owning a food business, she didn’t even like coffee that much.  But, after getting her master’s in chemical engineering and living in Boston for a bit, she felt she was missing something in her life.  An opportunity presented itself through hospitality and Kathy was on her way.  “With the music, hospitality and community aspects of the business, I wouldn’t want to do anything else.”

Twenty-three years ago she moved into the Hamline-Midway neighborhood and three years after, she would move into the former Half-Priced bookstore.  Immediately, she focused on two areas, providing delicious Minnesota-roasted coffee and, interestingly enough, a music venue.  Since its opening, Ginkgo Coffeehouse has been a destination for local and national acts, particularly in folk, bluegrass, singer-songwriter, Celtic, blues and more.  Kathy’s inspiration came from a meeting at the North American Folk Alliance of Dance and Music conference, where she realized the opportunity to connect her newfound business venture with a lifelong interest.

In between preparing delicious refreshments and providing excellent music, Ginkgo has become a very important part of the Hamline-Midway community.  Kathy elaborated on this by trying to list them all, “Book clubs, block clubs, Heartwood Festival folks, Hamline History Corps and many other formal and informal groups”.  Along with providing an easy meeting space for folks, Ginkgo is also known for donating goods and money to many community events and organizations.  They also display rotating art from local artists and even offer a little something extra from patrons with novelty trinkets including gag gifts to cool decorations.

“Originally I started with coffee and tea retail items, like pots and mugs, but those weren’t very popular.  But, shortly after I went to these items and greeting cards and people just loved them!  We were one of the only coffee places that sell them, so that made it really special.”  Kathy also has a claim to fame as being the longest-running single-owner operated coffee store in the Twin Cities, showing Kathy’s durability in changing times.  “When I started out there were about a dozen, then there were twenty, but, now, I’m the only one from that original group of owneres.”  The durability is clear from the different ways that Ginkgo caters to the community while offering a little something for everybody.

We asked customers what they thought about Ginkgo and you can find out what they said in the audio interview below.