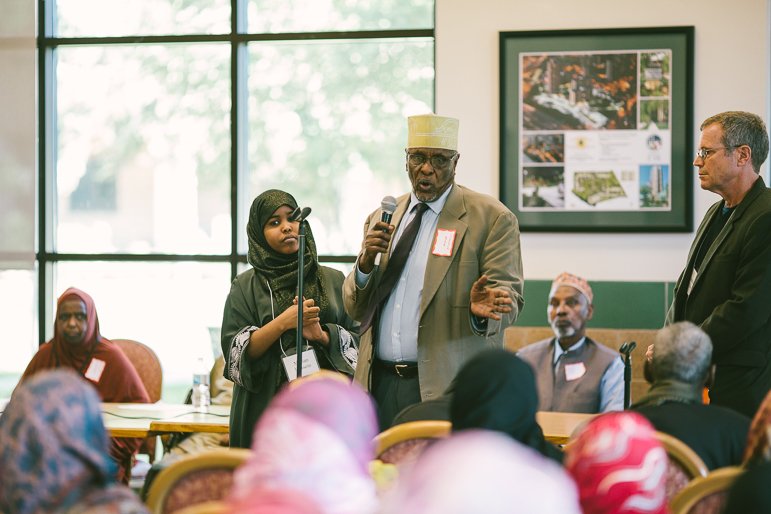 Members of the Minneapolis Highrise Resident Council and discuss how they feel about HBO's proposal to film its show "Mogadishu, Minnesota" at Cedar-Riverside Plaza on Oct. 5, 2016. Photo by Alexa Aretz.

On a windy Wednesday afternoon, residents shuffled past guards and staff to get to their seats. The Minneapolis Highrise Representative Council (MHRC) held a hearing for residents to vote on allowing HBO to film its upcoming “Mogadishu, Minnesota” TV series on their premises. That day, Oct. 5, residents voted 51-0 and denied HBO access to filming in Cedar-Riverside Plaza.

“The intergenerational solidarity I witnessed was something I had never seen before,” says Saida Mahamud. Residents cheered when the verdict was delivered and invited media and guests in for tea and biscuits. 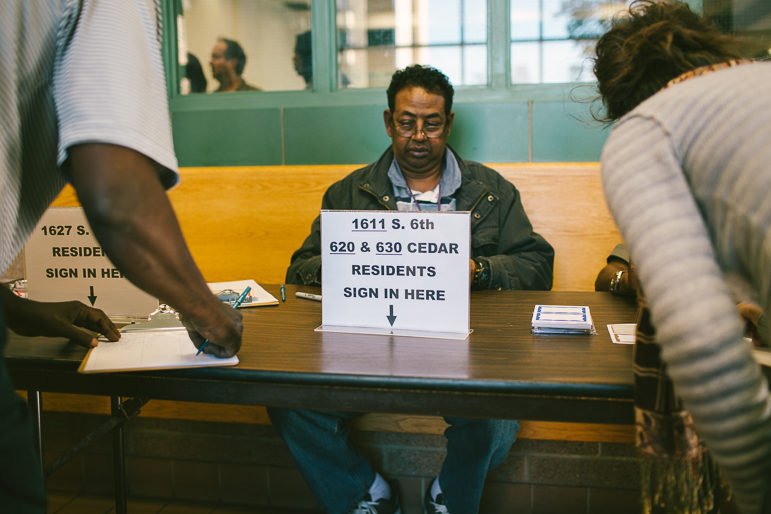 Residents and community members sign in to speak at the Oct. 5 Minneapolis Highrise Representative Council meeting. Photo by Alexa Aretz.

Residents of Cedar-Riverside Plaza, the city’s Somali community and other allies are vocally opposed to “Mogadishu, Minnesota,” formally titled “The Recruiters,” directed by Somali pop artist K’Naan and executive produced by Oscar-winner Kathryn Bigelow, known for directing war films like “The Hurt Locker” and “Zero Dark Thirty.” Like Bigelow’s other projects, “Mogadishu, Minnesota” worries many in the local Somali community due to themes that might spread Islamophobia.

Community members organized a protest against the TV series last month during the West Bank Community Coalition’s annual block party where K’naan was set to perform. Residents have asked K’naan to attend a public community forum where questions about the show’s portrayal of Somalis could be answered but have received no response. In early October, concerned residents created a petition criticizing the project’s stereotypical portrayal of Somalis and quickly garnered over 500 signatures. The movement took to social media using the hashtags #SayNoToHBO and #DearHBO along with #CMEnotCVE and garnered discussion Hollywood’s portrayal of Muslims and Somalis.

Even though HBO was kept out of MPHA buildings, the cable channel has no plans to stop filming the project in Minneapolis. HBO crews were spotted Tuesday afternoon in downtown near the light rail station on Hennepin. According to the city of Minneapolis, HBO has secured filming permits through an independent local contractor. HBO plans to continue filming throughout this week and will be filming two blocks near the 24 Mall, a popular Somali shopping center. HBO also plans to film near the Midtown Exchange and Walker Art Center.

Many residents were shocked when the Minneapolis Public Housing Authority board voted unanimously to begin contract negotiations with HBO during a Sept. 28 meeting. 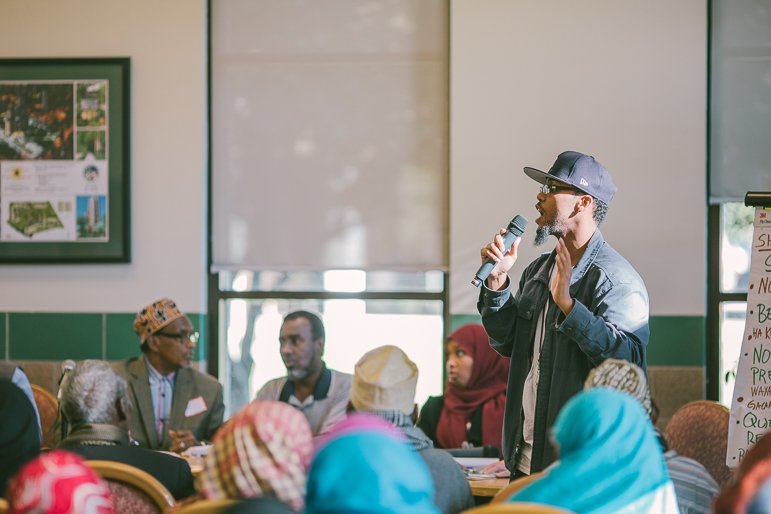 “We were blindsided; HBO was not even on the meeting agenda. I felt like the board completely contradicted the community’s opposition,” says Burhan Mohumed who attended both the board meeting as well as the resident meeting.

HBO executive Jonathan Filley spoke at the MPHA board meeting about creating jobs and reassured the board that terrorism was not a major plot point of the show.

When asked what type of materials were presented to the board members and if HBO has provided information on job creation and wage, MPHA’s Communications Director Jeff Horwich says, “Board members did their own research and had their own conversations prior to the vote; the staff did not facilitate that or provide any materials from HBO or anywhere else—nor did we have any to provide.”

MPHA staff did not see eye-to-eye with the board and were not keen to work with HBO. At the Sept. 28 meeting, MPHA Executive Director Cora McCorvey expressed the concerns of MPHA staff with protecting the privacy, safety, and quality of life of public housing residents if HBO were to film.

“Unfortunately, as we expressed on-the-record when asked by the board at our public board meeting, the deadline for a decision did not allow staff all the time we might have ideally liked to request and disseminate addition information about the process, and engage in resident discussions,” Horwich says.

The MPHA board was not alone in their support. Minneapolis Mayor Betsy Hodges along with City Councilmember Abdi Warsame were among the supporters of the project. They have not rescinded their support for “Mogadishu, Minnesota” despite widespread community opposition. Residents have created protests, petitions, social media movements, and voted unanimously against HBO filming in their apartments. Sherman Associates, owners of the Cedar Riverside Plaza and the Midtown Exchange denied filming access to HBO. Press releases about the project have forced the community to vocalize against the harmful generalization of terrorism. Despite all these efforts, support from public officials continues.

HBO, CVE or ISIS – and problems of representation

Community members are also frustrated with the coverage around the HBO series. Burhan Mohumed attended the resident council meeting and called out news outlets for misrepresenting the community at the podium.

“My experience with Star Tribune and MPR has led me to lose faith in any of these local media to accurately present our stories,” Mohumed says “we talked to Star Tribune many times, attempting to share the grassroots organizing to reject this HBO series and we’ve done the same with CVE.”

CVE, or “countering violent extremism,” is a Department of Justice-funded pilot program to “deradicalize” Somali youth. Many community members worry that the initiative is an intelligence-gathering program disguised as community outreach and that it unfairly targets an already marginalized community. Critics have likened CVE to the “War on Drugs,” which unfairly targeted Black Americans using unsubstantiated claims and harmful methods. Both Hodges and Warsame support CVE programming. Warsame even traveled to Washington in 2015 to attend a White House summit about CVE and declare his commitment to the initiative.

For Mohumed and other community members, there is no difference in the way HBO plans to portray Somali Americans and the way the media has done with other recent news coverage around CVE and the ongoing ISIS trials.

“In this particular story, HBO and the CVE policy are in line with the dominant narrative. We are to be seen and received in a certain way and it’s as a threat,” Mohumed says. For those who are not a part of the Somali community, the only interaction they may have is through media.

If Somali Americans are depicted as violent criminals, “Fiction becomes reality,” says Kafiya Ahmed, who spoke against HBO at the resident council meeting.

HBO is still intent on carrying out the TV series. During the resident council meeting, Ahmed “Southside” Hirsi, who is working with HBO, says, “We understand your position,everyone can say what they want, the other apartments have given us permission to film.” HBO has already begun filming and have not commented publicly yet on when the pilot episode will air.

“People are meeting every week to discuss what to do because we know the bigger implications of this TV show. It’s not over but the community has shown consistently that we are not backing down. The elders and the youth are not backing down,” says Mohamud.

To continue the conversation about CVE, representation and the importance of owning your narrative please join us on Saturday, Oct. 15 for Twin Cities Media Alliance’s Fall Media Forum, “No Stories About Us Without Us: the power of narrative.”

Correction Oct. 14, 2016: A previous version of the story reported that Ahmed “Southside” Warsame spoke at the Oct. 5 Minneapolis Highrise Representative Council meeting. The individual’s name is Ahmed “Southside” Hirsi. We apologize for the error.