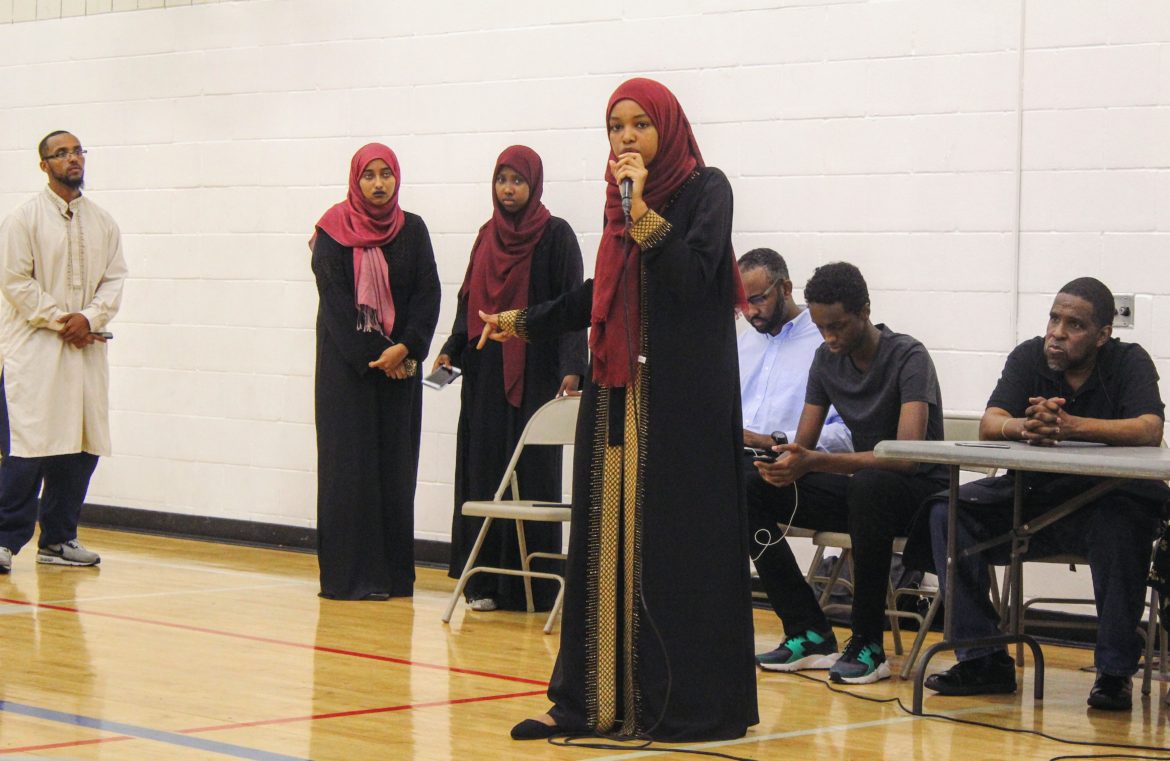 In the wake of yet another state-sanctioned killing by police, the names Terrence Crutcher, Korryn Gaines and Philando Castile sink heavy in the voices of protesters. From Tulsa to Baltimore, St. Paul and beyond, racial profiling disproportionately targets black and brown lives. In the Twin Cities, Somali youth are voicing their dissent over a federally funded program called Countering Violent Extremism (CVE) that aims to surveil and stigmatize the predominantly Muslim community. In July, Somali youth held a forum at Brian Coyle Center to discuss the implications of Islamophobic programs like CVE and how they could work together to dismantle it.

Back in 2011, the U.S. Department of Justice (DOJ) announced CVE as their new anti-terrorism initiative to deter U.S. residents from joining “violent extremist” groups. Religious and community leaders from Somali communities across the country joined with law enforcement, health professionals, teachers and social service employees to endorse the program under the slogan “building community resilience.” By 2014, CVE launched in three pilot cities: Boston, Minneapolis and Los Angeles.

Youthprise, a nonprofit located in Northeast Minneapolis distributed the $300,000 from the DOJ to six Somali organizations eligible for CVE programming. Those organizations and their payouts were: Confederation of Somali Community in Minnesota for $100,000, Somali American Parent Association for $85,000, Shanta Link for $35,000, the Ummah Project for $30,000, Africa Reconciliation and Development Organization for $25,000 and Westbank Athletic Club for $25,000.

“If I am a nonprofit leader in my community and they give me $50,000 I can provide certain resources and I might do good with that money, but the fact of the matter is the Department of Justice is a law enforcement agency,” youth worker and staunch CVE opponent Burhan Mohammed said, “In a nutshell, the CVE program’s ‘building community resilience’ was basically a way to get into the community. When those nonprofit organizations signed up and talked about how good of a pilot program it was they were basically consenting to be searched, investigated and studied. When you sit down with the U.S Attorney and the Department of Justice they’re not sitting down with you because they care about your community.”

A divide and conquer strategy on the community

On July 1, 2016, three Somali youth, Guled Omar, 21, Abdirahman Daud, 22, and Mohamed Farah, 22, were found guilty of conspiracy to provide material support to the Islamic State and conspiracy to commit murder abroad. The trial took place in Minneapolis over the course of seventeen days and originally involved nine youth of which six plead guilty to thinking about traveling to Syria to join ISIS. For highly circumstantial evidence and what amounted to be “thought crimes,” three young men were charged life sentences. The “ISIS trials” rippled fear throughout the Somali community and everyone from elders to the youth felt unsafe.

“Consider our history as a Somali community with the U.S government. They [elders] have had really bad experiences from wars back in Somalia, to how we are treated as immigrants. So a lot of times older people who’ve had these experiences look at the FBI or the police state and don’t mess with them, and that’s a part of survival, Standing up to the FBI like we are doing now is taking a step back for them instead of coming to this country for a new start.” Mohaned Salad, 16, said. He said he has also seen fear set in among younger Somalis practicing Islam.

“When the three young Somali men got locked up back in April 2015, if you fast forward a year later, you’ll see the mosques are no longer packed like they used to be. Now you’ll barely see anyone praying. Everyone took a step back when it came to their religion because they were hit by fear,” Salad said. And the DOJ compounded that fear by offering a community watchdog program like CVE.

According to U.S. intelligence officials, as of 2015, only about 150 American citizens and residents of varying races and religions attempted to travel or traveled to Syria as foreign fighters, “there’s no scientific evidence or scholarship behind it,” Mohammed said of CVE. The conflation of Muslim and radical, in the case of CVE, is vague, racist and violent.

“The argument for CVE programming is often [that these] resources [are] to prevent ‘radicalization,’ and what are the signs of ‘radicalization’?” Mohammed said, “if a young Somali youth doesn’t attend after-school programming, doesn’t have a job, if you live in an impoverished neighborhood and if you aren’t going to college you are a target for radicalization.”

Mohammed has been instrumental in developing critical discourse around CVE programming at the Brian Coyle Center and in the Cedar Riverside neighborhood.

Since the FBI’s original visit to the Brian Coyle Center in early June of 2014, federal employees have showed up at mosques and interrogated faith leaders, leading to strained relationships between Somali youth and some older folks in the community. In the midst of these interrogations we wrestle with more questions: How shall integrity face oppression? What does honesty do in the face of deception? And lastly how does virtue meet brute force?

With the Somali Youth of Cedar Riverside we have exemplary fighters for freedom in justice to look towards that are in the same vocation and come from the same tradition of critical thought and courage as great Black thinkers and revolutionaries of the past. How the youth answer those questions for themselves will bring a new level of discourse and change to the community.

From leading a forum on CVE on July 25, to refusing the “Mogadishu, Minnesota” TV series from HBO and K’naan, they are carving their space and protecting their narrative.

“I feel like when it comes to CVE, it’s putting a label on us by saying the youth nowadays don’t know how to control themselves in joining terrorist groups,” Aishah Mohamed, 15, said. “We have more issues going on and I feel like we should focus on the bigger issues in our society.”

To learn more about CVE and the many intricacies the funding entails, join us on Saturday, Oct. 15 at the annual Twin Cities Media Alliance Fall Media Forum for a panel discussion titled “Is Funding for Counter-Terrorism Initiatives Counterproductive?”