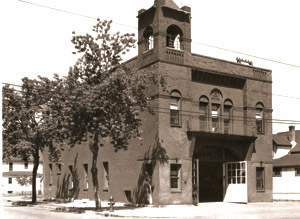 Steven Be wants Chicago Avenue to be known as Art Street. Just as Nicollet Avenue is known as Eat Street, he wants everyone to know that Chicago Avenue is where art is happening. He reminds you that just between Lake Street and 38th Street there is the Pillsbury House Theater; the Fire Arts studio and gallery; the Blue Ox Coffee House and Café SouthSide where they have entertainment and music; the Wing Young Huie Photography Gallery; Modern Times Café with its adjacent art studio and Southside Pride newspaper upstairs. He wants banners up and down the street proclaiming Art Street: “We feel the time is right.”

Steven’s contribution to the mix is his Yarn Garage Workshop. In a converted 1890 fire station, he holds court; presides over miles of multi-colored yarn; teaches knitting and fiber art classes to “Girls are Not For Sale,” a group trying to keep teenage girls out of prostitution (“Knitting has a very therapeutic nature and it’s a productive use of time,” Steven says); conducts the Urban Knitters Lunch and Lounge, catered always by a local restaurant (“Shop local and support your independence,” he says); and he’s planning his third annual Fashion Show. The first one was a fundraiser for Fire Arts. The second one raised $4,000 for the long-term care of Guadalupe Hernandez, the 13-year-old girl who was shot and paralyzed standing in front of her door just across the street from Steven’s Yarn Garage. The one coming up Oct. 6 will be a fundraiser for the Steven Be Creative Causes Foundation. Some of the money raised will be used to buy materials to make scarves, hats and mittens for homeless people. They’ll be given away at Sharing and Caring Hands on Dec. 24, Steven’s birthday. Some will go for materials for therapy classes. And some will go to create a giant collage of fiber art.

Steven Berg was born in Souix Falls, S. D. He went to high school in La Crosse, Wis. He came to Minneapolis in 1979 to study fashion design at MCAD (the Minneapolis College of Art and Design). He left and went to New York City and Parsons Design School and the Fashion Institute of Technology. He worked for 30 years as fashion designer for St. Croix Knitting and then Munsingwear. He was based mainly in Hong Kong: “I was very corporate, very driven,” he says. With some other knitters and partners he set up the Yarn Garage in Rosemount in 2003. In 2009 he bought the old fire barn at 35th and Chicago. In 1940 the building had become an American Legion Post where the local DFL used to hold fundraisers, and after 1982 it became a photographic studio. “This was my chance to come back to my roots in design and contribute to a community and make a difference,” he says. “This is where craft meets art. Anyone can do it.

There’s a lot to be gained by using your hands and being creative.”