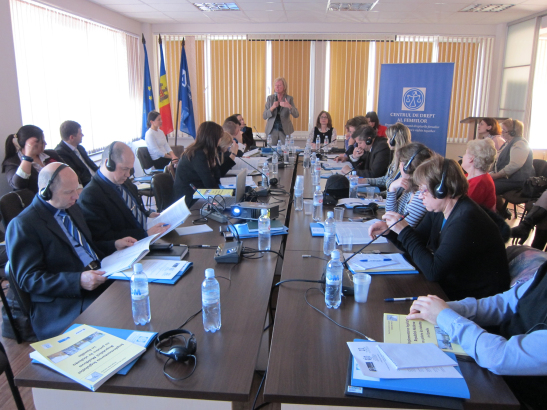 Chisinau, Moldova, is a place where the Soviet footprint is still visible. Stray dogs greet you at the airport. Tall, half-destroyed bloc apartments are the first buildings you see on your way into town. People live there, and lots of them, to judge from the laundry flapping out over each unfurnished balcony. The trees in the shabby but gracious old city are whitewashed from their roots up nearly three feet to encourage their growth. Most of the buildings are one or two stories in various states of disrepair, with the formerly lovely intricate stucco trim now crumbling. But I don’t let the appearance of things fool me—the people and government of Moldova are making real progress on protecting and advancing women’s rights.

The Advocates for Human Rights is here, at the invitation of our local partner, to launch our newest report, “Implementation of the Republic of Moldova’s Domestic Violence Legislation.” The report is the product of three weeks in 9 cities and rayons, 67 interviews with 130 people, and a year’s research and writing. The study was funded by The Advocates’ donors, who are working to stop violence against women in Moldova. There is also a strong UN and other international organization and government presence in Chisinau: UNFPA, UNICEF, OSCE, IOM, to name a few. All of them want Moldova to advance along the path to democracy and financial independence. Moldova’s economic woes are beyond the scope of our project, but suffice it to say that the Soviets named Moldova the wine-producer for the entire Soviet Union and failed to encourage diversification. Wine is still a local triumph and regional export, but it is not able to carry the Moldovan economy, and the country remains one of the poorest in Europe.

Our report’s focus, domestic violence, has likely been impacted by the struggling economy. A 2011 study conducted by the Moldovan National Statistics Bureau found that 64% of women here have been victims of physical, economic, or psychological violence. That’s a very high statistic– most other sources say 25-30% of women are victims worldwide. The Moldovans passed a good law a few years ago but are struggling to implement it so that it really does protect women, despite ground-breaking leadership with their codification of a coordinated community response. The coordinated community response means that multi-disciplinary teams are formed to meet the specific needs of victims in five regions of the country. When it works, it works well.

Our local partner arranged two events for the launch of our report: an official presentation at the Commission for Gender Equality, presided over by the Deputy Prime Minister and broadcast live on TV, and an all-day roundtable discussion the next day, to which the international organizations, government officials, and people who work on the front lines with victims were invited. That first meeting at the Commission consisted of all government folks, and some were just the right high-level ones you’d want to hear your findings: the Minister of Social Protection, Labour and the Family, for instance, who has decision-making power to fund and staff many more shelters and crisis centers, desperately needed in this country, where there are only 106 shelter beds for 3.5 million people. The next day, the room on the 6th floor of the Ministry of Labour, Social Protection and Family was packed with people around the table cluttered with the microphones, cords, and headphones necessary for simultaneous translation. Twenty other people sat on chairs around the edge of the room. Turns out those people on the edges were the international donors: OSCE, the Norwegian government, IOM, Winrock, and the U.S. Embassy. The people at the table were the ones on the ground: a judge, a police officer, a prosecutor, the legal assistance coordinator, and several lawyers who serve victims. Of course, there were many service providers, who work every day to find a bed for a woman in crisis, who set up the multi-disciplinary teams, who help a victim get an order for protection and find safety from a violent offender.

We talked about the report in more detail that day– outlining all of our findings and telling the stories of victims we’d heard from many small villages, a prison, and the few large urban areas like Chisinau. We tried to make the law’s problems come alive with each victim’s story. Each time we stated a “finding of concern” we made a corresponding recommendation to the Parliament, the police, the judiciary, or the service providers themselves. As we had hoped, our presentation rapidly changed from a PowerPoint into a vibrant dialogue with the professionals at the table. These were their jobs we were describing. They clarified points of interest; proudly informed us of improvements made since our report, and at times challenged our findings, always respectfully. They nodded when they heard our explanations, recommendations, made suggestions, and took detailed notes. We had to be reminded to take a coffee break, and soon to head across the street for lunch.

After lunch, despite the beautiful Friday afternoon, the interest of the stakeholders around the table hadn’t lagged. Once again, we were in the thick of a wonderful give-and-take. In the afternoon we skipped our coffee break completely.

While the obstacles are huge, we have a sense that leaders here in Moldova are accepting real responsibility for stopping violence against women. They are ready to step up to fight for legislative change, for more resources for shelter beds, and for training at all levels of the government response – all to make victims of violence safer in Moldova. The motto of our Moldovan partner, the Women’s LawCenter, is “Advancing Women’s Rights Together.” The people we have worked with here are doing just that.

Mary Ellingen is a staff attorney with Women’s Human Rights Program of The Advocates for Human Rights.