People living paycheck to paycheck are at risk. And, according to Maria Shriver, in “The Female Face of Poverty,” (The Atlantic, Jan. 8, 2014), many of the poor or nearly poor are women.

“More than 100 million Americans either live near the brink of poverty or churn in and out of it, and nearly 70 percent of these Americans are women and children,” Shiver writes.

Such Americans are more likely to be one health care crisis, car accident or divorce away from a financial cliff especially when their children – and increasingly their parents – are dependent on them for support. Shriver notes that mothers are the only or primary breadwinner in 40 percent of households with children under the age of 18. 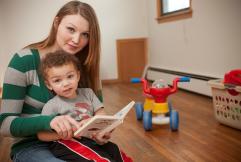 Furthermore, bipartisan political decisions since the 1990s demonizing “welfare mothers” have created even more of a burden on poor women, writes Barbara Ehrenreich. (“It’s expensive to be poor,” The Atlantic, Jan. 13, 2014). Instead of blaming them, she says, “It’s time to revive the notion of a collective national responsibility to the poorest among us, who are disproportionately women and especially women of color.”

The author of Nickel and Dimed: On (Not) Getting By in America, Ehrenreich did her homework by taking a series of low-paying jobs including house cleaner, restaurant server and big box retail worker. She lived on her wages and found it was really difficult to rent an apartment, eat decent food and certainly to save money – much less get ahead. In the end she found “that in some ways, it is actually more expensive to be poor than not poor.” Read the book – it’s a reality check for some of us.

Poverty is not only a women’s issue but its effects and connection to the conditions that can lead to homelessness deserve the attention of all women and men.