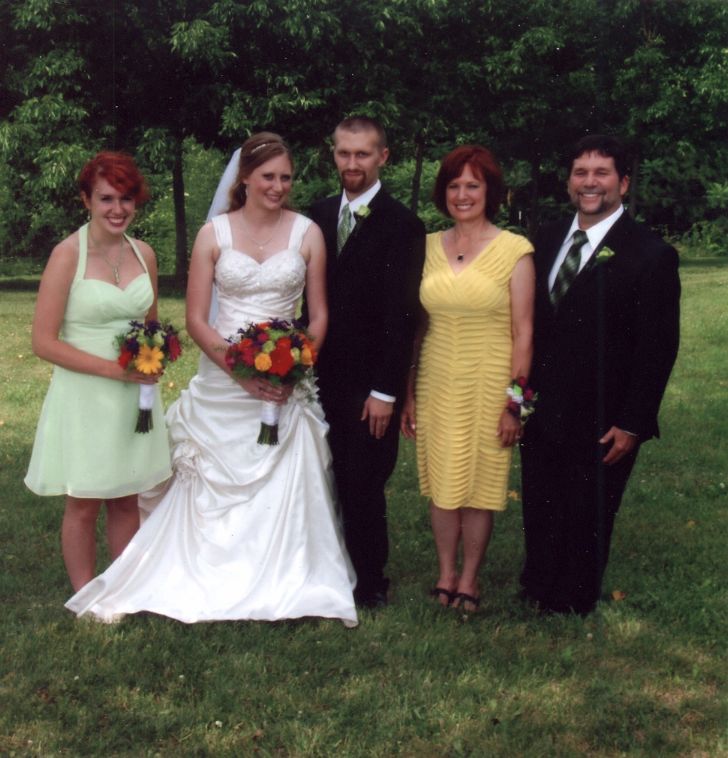 Anne Morse and Jon Nicholson of Dakota, Winona County, Minnesota, who have been married since Trix was a pup, saw their own son marry last year. They can’t entertain denying the happiness that they and their child have found in marriage to any other committed couple.

“My son was married last summer, and it was a wonderful event for our family, and for the new, extended family that we now are,” Morse said. “His happiness with this life-changing event is obvious to all who know him, and I just can’t imagine trying to prevent others from such an experience. To stand in the way of others who want to do the same would be cruel indeed.”

The couple hopes that their state representative, Gene Pelowski (DFL-Winona) and state senator, Jeremy Miller (R-Winona) will vote yes in the pending votes on the Clark/Dibble bills extending the freedom to marry to gay and lesbian couples.

The Morse–Nicholson match paired a life-long state resident with a chosen Minnesota.

Morse is a member of a politically-active Minnesota family that’s produced both environmental advocate and former Winona-area state senator Steve Morse and conservative activist Julie Morse Quist, spouse of perennial Republican candidate Allen Quist. Nicholson, on the other hand, is a “military brat” who picked Minnesota because of its tradition of progressive leadership.

“I grew up in a Navy family and moved all around, but lived mostly in NW Florida — a very conservative area politically, more openly racist at the time I was a kid, with a culture strongly influenced by religious intolerance,” Nicholson told Bluestem Prairie.

“After college, I spent some time trying to decide where I would like to live,” he continued. “A number of factors lead me to Minnesota, but two prominent factors were the reputation that Minnesota had for a high level of education, and the moderate-to-liberal politics.”

Morse, works as Winona County’s Sustainability Coordinator, believes marriage equality will strengthen rural communities. “I was raised on an apple orchard, and great pride was taken in working hard and playing (though not quite enough). But I came to know that our small communities were pretty homogeneous too, and that’s where we fell short,” she said.

“Growing up with the same folks through grade school, middle school and then high school, it was clear that being gay or straight was not a choice,” Morse recalled. “It was just who we were; some of us were straight and some of us were gay. It was obvious. But there was pressure for conformity too, and most gay friends who were honest with themselves moved away as soon as they were able. Over the years, too many friends have felt they had to leave, and I have missed have them.”

“Passage of the Freedom to Marry bill will be great for Minnesota as a whole, and just fine for rural Minnesota too,” she concluded. ” It will keep some of our best and brightest here. It will not affect my marriage, nor that of my neighbors. Most opposition to marriage equality is based in fear, which is generally never a good basis for any decision-making. Our fears are often far worse than the reality ever is, once we confront it.”

Nicholson is more laconic in stating his conclusion about the impact of marriage equality. “Minnesota will lose one more reason for people to become agitated about pointless divisions between the people,” he said. “Minnesota can focus more on issues that affect the lives of the majority of people, rather than obsessing about the legal status of two people who love each other.”

Her own marriage matters to Morse. “The commitment of marriage has been important to me personally, she said. “It is a tie and a connection between my husband and myself that is also acknowledged within the larger community. No explanations necessary. Our relationship was simply accepted. For others not to be able to experience this, well it’s just not fair.”

Her husband, a chemical engineer who runs his own small business, considers the legal benefits of marriage as an important factor in extending the freedom to marry to gay and lesbian couples. “Marriage is a legal contract, recognized by the state,” Nicholson said. “This contract extends important rights and privileges, and and allows for the sharing of assets and provision of access. To withhold this opportunity from any adult is unreasonable.”

Nicholson’s pro-equality views also have roots in friendships with colleagues and neighbors. “Like everybody else, I’ve worked with gay people, and had gay people as friends and neighbor,” he said. “Because I wasn’t judgmental about their sexual orientation, I don’t think that most gay guys or lesbians that I’ve known have bothered to hide it from me.”

He rejects the notion that gay men and lesbians can find happiness in straight unions. “Gay men and lesbians have married members of the opposite sex because society (and families) expected them to, but what I’ve seen and heard about from these marriages has been that it just created misery for all of the people involved,” he observed.

“Misery is not good for anyone, and does not help build a society or state where people can reach their personal best or contribute their best to our country’s welfare,” Nicholson believes. “Let people marry whom they choose — and let the legal benefits of marriage (including such benefits as health insurance, survivor benefits, etc.) be available fairly, to everyone who commits to a married life.”

Echoing a viral video meme, Nicholson sees another bonus for Minnesota with the passage of the marriage equality bills.

“I look forward to the day when heterosexual guys can compete only against each other for heterosexual women to marry,” he said, “and not have to compete against guys (better-dressed guys!) who secretly would rather be with men.”

Photo: The wedding of Morse and Nicholson’s son Ian’s to Caitlin last summer.