Minnesota’s poorest children are at high risk of never overcoming the debilitating effects of poverty, despite a state program intended to better their lot, according to a new study by the Children’s Defense Fund-Minnesota.

According to “Minnesota’s Invisible Children: Children in Families Receiving MFIP,’‘ about 70 percent of those receiving financial support through the Minnesota Family Investment Program Assistance are children, yet “MFIP is woefully inadequate in keeping kids out of poverty,” says Marcie Jefferys, the fund’s policy development director and author of the report.

“MFIP keeps children from destitution, but they remain poor and are often pushed deeper into poverty by current policies,” the report notes.

That should worry Minnesota lawmakers and business people looking ahead to the state’s future work force needs, she says, because:

“The environments in which children grow up affect all aspects of their development. Poverty, especially deep poverty, is often toxically stressful for children and can disrupt the architecture of their developing brains.” Of the 71,000 kids receiving MFIP last year, more than half were age 5 or younger, a time of rapid brain development, according to the study.

On the other hand, improving these families’ economic well being and increasing children’s access to services such as Early Head Start and quality child care are “important efforts Minnesota could make to reduce future public expenditures, increase the productivity of its future workforce and improve the lives of its youngest citizens,” the report says.

“We know who these kids are. We can name them. You get high bang for the buck, a high return on investment” by making sure these children get the help they need early on, Jefferys says.

She says the Children’s Defense Fund is issuing the report to lawmakers and state administrators with the hope some social service policies will be changed to help children.

Overall, about 15 percent (192,437) of the state’s children live at or below the poverty line, according to the U.S. Census Bureau.

Erin Sullivan Sutton, assistant commissioner of the state Department of Human Services, this week praised the report for throwing the spotlight on very poor children and “reaffirming something we already know:” that “as a state we are not doing as well by these children as we should be.” 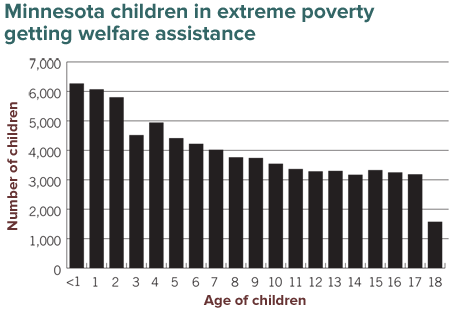 “We should not be leaving children in extreme poverty,” Sutton says, confirming that Human Services personnel are reviewing current policies surrounding MFIP, which she describes as a “welfare to work” program. She says the report will “help with conversations” and assessments.

Living in so-called deep poverty, these children may experience not only food shortages but also homelessness, child neglect, unsafe neighborhoods, substandard housing and a parent or guardian with mental illness or chemical dependency.

The report cites telling figures: that almost half of parents or guardians in MFIP have received a mental health diagnosis within the prior three years, that 37 percent of the caretaker adults were diagnosed with a chemical dependency and that 18 percent of MFIP families were involved with the child protection system within the prior three years — almost five times the rate of the general population.

Children growing up in such stressful environments, according to numerous studies, are at high risk of developmental delays and long-term health consequences. A child whose mother has depression — a common condition in this group — doesn’t respond to her baby as a healthy mother does, thus reducing a child’s opportunity for human interaction and learning, for instance.

Other early learning opportunities are lacking as well. Only one in eight of these children under age 6 was enrolled in Head Start or Early Head Start in 2009-2010.

That’s because, since 2003, the state has “frozen payment levels” to families on MFIP who have more children. Under the so-called “family cap,” financial payments to these families do not increase with the birth of another child.

The family cap has not been shown to keep women from having babies, according to the report, only to push families deeper into poverty. (A family of one parent with two children receives a monthly MFIP payment of $532.)

Other financial sanctions such as non-compliance with requirements to document job searches reduce cash assistance by 10 percent or 30 percent, but don’t take into account family circumstances, such as families having children with disabilities or chronic health problems or adults struggling with depression, domestic violence or illiteracy, according to the report.

The current MFIP program is quite a bit different from Minnesota’s original, ground-breaking welfare reform program, says Deborah Huskins, who helped pilot the program during the time she was assistant commissioner at the state Department of Human Services from 1994 to 1999.

That program, Huskins says, was focused on making work pay and allowed people to earn some money while receiving some cash benefit, thus providing incentive to work. The original policy was to help people back on their feet and back into the work force “as quick as possible.”

“Rewards,” such as child care and employment services such as help writing resumes, were built into the program, but the program has been eroded by cuts, says Huskins, who now works in human services for Hennepin County.

The report makes a number of recommendations, including: review of polices for their impact on children and child development as well as adoption of employment policies such as paid sick leave, adequate wage leaves and tax policies to keep families out of poverty.