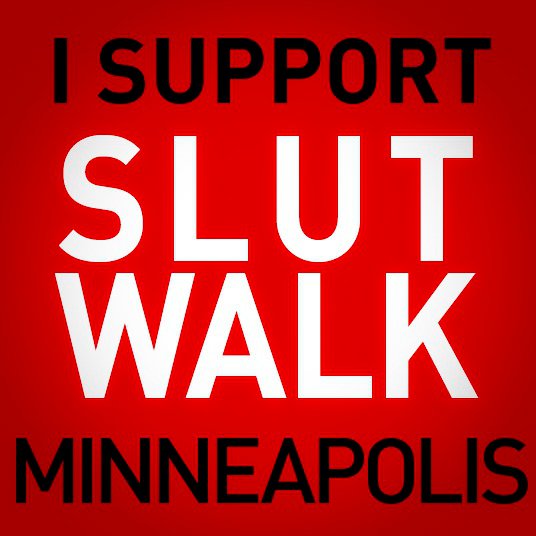 The Minnesota NOW State Board recently voted to co-sponsor an event called SlutWalk Minneapolis, to be held on October 1, 2011.  For a quick primer on the global SlutWalk movement, allow me to quote from a column I wrote on the subject that appears in this month’s issue of the Minnesota Women’s Press:

“…in January of 2011, a Toronto police officer named Michael Sanguinetti told a group of college students that ‘women should avoid looking like sluts in order not to be victimized.’  What began as a grassroots plan to protest the police attracted widespread attention (due in no small part to the action’s purposely confrontational name), and an estimated 1500 people gathered on April 3, 2011 to raise awareness of sexual stereotypes and the persistence of victim-blaming in Canadian society.  Since then, SlutWalks have been replicated in London, Stockholm, and Sao Paulo, with walks in the works in Mexico City, Johannesburg, and Bishkek, Kyrgyzstan.”

Since one of Minnesota NOW’s core values is freedom from violence, our participation in an event whose goal is to end the silence about rape culture seemed natural.  After all, Minnesota NOW has participated in Take Back the Night marches and sexual violence speak-outs of many different kinds in the past.

Yet there remains a great deal of controversy over the prominent use of the word “slut” in conjunction with a feminist event.  Perhaps the most widely read essay on the subject, a piece by Rebecca Traister with the blunt title “Ladies, We Have a Problem,” appeared in the New York Times Magazine on July 20, 2011.  Many in our own local feminist community have raised vocal objections to the event, with criticisms ranging from offense to the name, to concern that walkers will be subject to harassment.

The decision to participate in this event was not made lightly.  We take your membership dues and additional financial support very seriously.  We met directly with the director of SlutWalk Minneapolis, Kimberia Sherva, and considered the issue before a full meeting of the State Board.  We concluded that the SlutWalk movement was an important part of reframing the societal discussion around sexual violence.  For too long, the message has remained “here’s what to do to not get raped.”  It’s time that changed to “DON’T RAPE.”

I hope to see you on the Minneapolis riverfront on October 1.