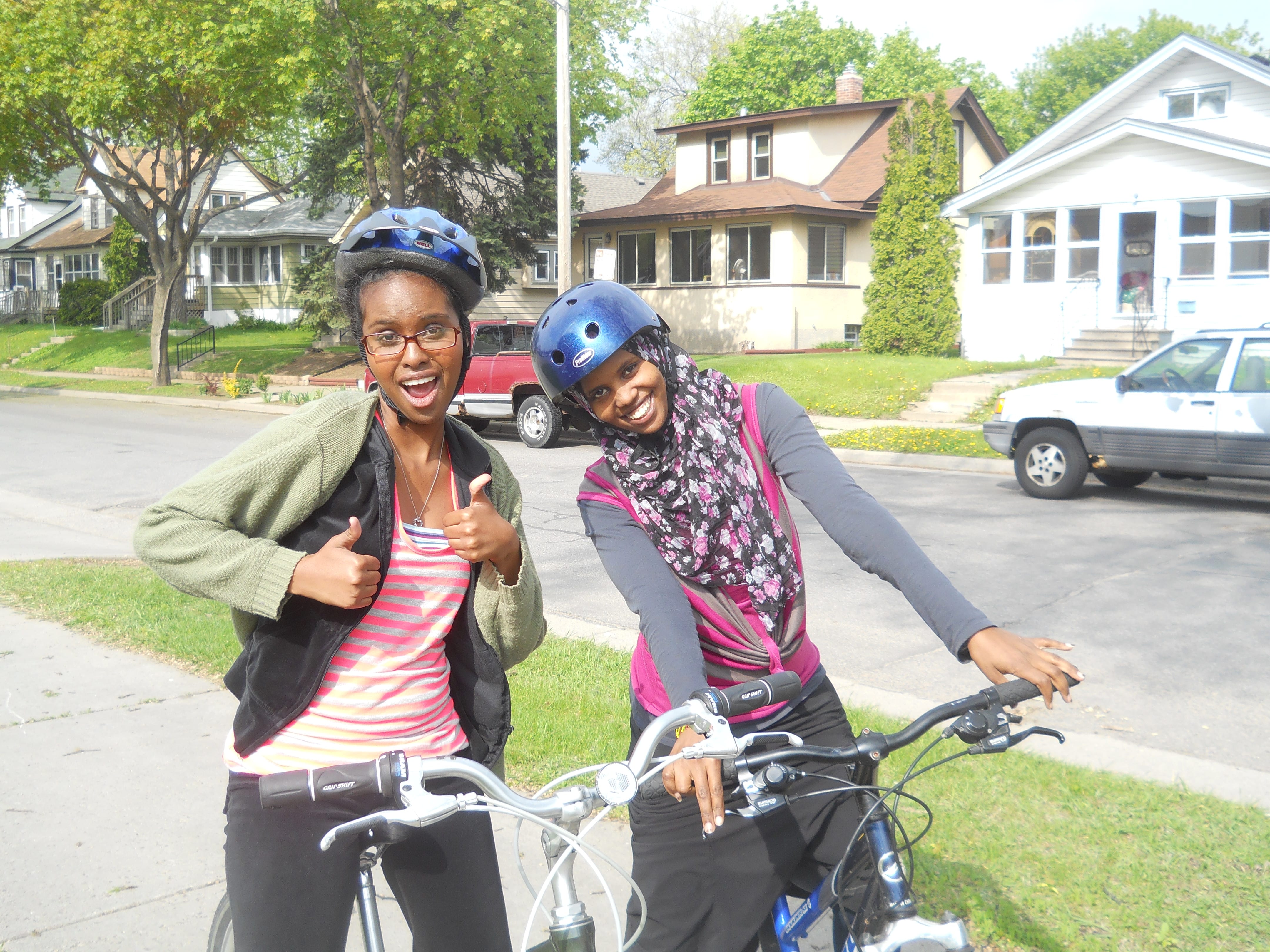 Yasmin and Deko of the Wellstone Bike Club.

The air is brisk, but not exactly cold.  The sky is infinite blue.  I throw on my thin merino undershirt and think about sunglasses which I haven’t worn since I was a child due to the eternal presence of high-prescription eyeglasses.  I’m heading down the oversized sidewalk known as the Hiawatha Avenue Trail to Roosevelt High School to meet the Wellstone Bike Club.

At the school (Roosevelt and Wellstone International share a building), a door flies open to a mechanical shop with work tables, a couple dozen bicycles, wheels in varying states of assembly, boxes of parts, and tools (sold at cost by Sunrise Cyclery).  There I meet Jeff Carlson, the club’s founder and leader.  Jeff has long blond hair, and a face accustomed to smiling.  He’s dressed informally in something that can get a little grease rubbed on without too much disaster.  He enthusiastically shakes my hand and brings me into the shop as students trickle in.

The Wellstone Bike Club currently consists of East African teenage girls, most of whom did not grow up cycling.  In the club, they learn how to ride a bicycle, how to do repairs, and how to explore Minneapolis in a safe and lawful manner by bicycle.  They ride donated bikes and eventually get their own bike with helmet and U-lock when it’s clear they will be safe and comfortable riding.

Girls walk up to the bike pile, mostly Giant mountain bikes donated by the Midtown Greenway Coalition from an old program of theirs.  They run out to the parking lot and ride in circles, giggling.  Some boys on their way to soccer stop to chat with them and admire their bikes.  One girl helps another adjust her helmet strap.

After a while, half of the girls leave to ride to Lake Hiawatha, and half stay to practice in the parking lot.  The girls have a variety of riding styles, some keeping to the sidewalks wherever possible, some taking the quiet residential road as veteran cyclists.  We do our best to stay in one group in the short ride to the lake.  The girls shout out cries of glee as they roll into the spring air.  At the beach, the girls ditch the bikes and their shoes and run to wade in the still-very-cold water.  I hesitate to join, but they ask me to take their picture, and the lighting won’t be right unless I get in. 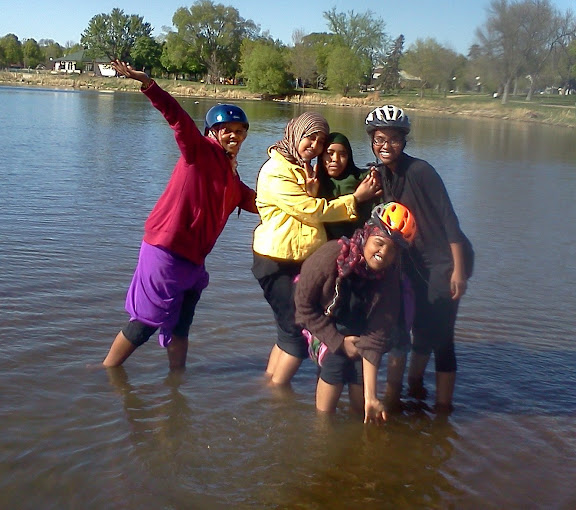 After wading a bit, we get out, and I ask the girls about their experience with the Wellstone Bike Club.  I was afraid they would be shy about answering questions, but the look of relief on their faces when they realize that they won’t be videotaped lets me know that it won’t be a problem.  They spoke of cycling being a very gendered activity in Africa — that they were discouraged by men from learning.  In the United States, they observed the dominance of car culture, which was new to them, as walking was their primary means of transportation in Africa.  They were excited to learn a human-powered form of transportation.

Nadivah described learning to bike two years back.  First, she learned to balance in the Roosevelt parking lot.  After a while, Jeff would give the bike a push as she learned to pedal.  She said she fell a lot, but had a lot of fun, and in a week or so, she was cycling.  Deko, who had just learned to bike, said she learned it in a day.

During the winter, the girls learned bike mechanics and repair.  I asked if any of them were winter cyclists.  None had made that commitment yet, and one girl, Yasmin, had yet to experience a Minnesota winter.  In fact, she had been living in the Southwestern United States and was used to the heat of the desert states.  The girls assured her that she was in for an experience come winter.

In April, the Bike Club organized Bike to School Day.  Catalyst donated t-shirts and U-locks to commuters.  The Bike Club cheered in the commuters and chatted with them over refreshments.  Though it was a cold and wet day, the enthusiasm to maintain bicycle commuting was very strong.  Students will be logging the days that they commute by bike this spring and prizes will be given out.  Also, teacher Scott Smedburg created a Baiku Poetry Contest: you guessed it, haikus about biking.

Eventually, we wrap up and head back to Roosevelt.  There are girls still in the parking lot, determined to gain self-sufficiency in bike riding.  I watch as Medina learns to pedal and maintain balance and as fear melts away to pride and excitement. 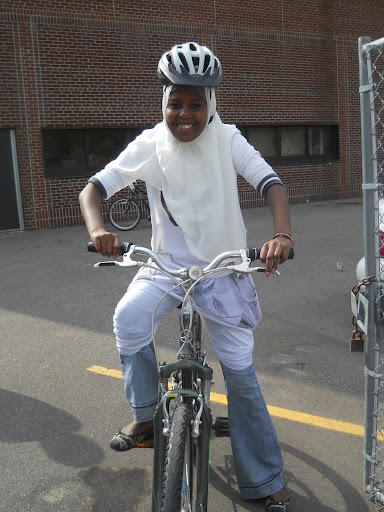