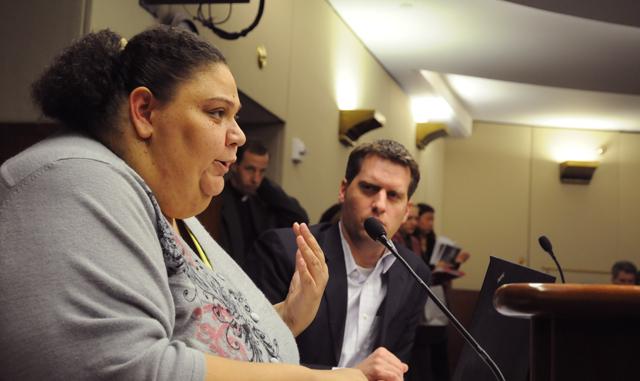 Angel Buechner of the Welfare Rights Committee testifying against a GOP welfare measure at a Wednesday hearing. (MinnPost photos by James Nord)

Supporters call it necessary. Opponents call it harmful. And the poor call the human services legislation making its way through the Legislature plain wrong.

“This is basically criminalizing being poor,’’ Ebony Harris, a mother of four from North Minneapolis hotly declared to the House Health and Human Services Reform Committee Wednesday about proposed legislation that would significantly change the lives of Minnesota’s poor but save taxpayers money.

Though mostly calm voices — legislators and the folks who’ve spent their careers advocating for those without — dominated the session, by the time the two-hour hearing on the clutch of proposals dubbed “Welfare Reform 2.0’’ wound down, the words “mean-spirited,” “offensive,” “demeaning,’’ “stereotyping” and “poor-bashing” hung in the air.

And then, after DFL Rep. Larry Hosch from St. Joseph tried unsuccessfully to table proposals that would restrict needs benefits on several fronts, frustration ignited.

Voices rose in anger. A loud half-dozen people from more than 100 present echoed the polemic chants of Deb Konechne from the Minnesota Coalition for a People’s Bail Out, shouting, “Stop attacks on the poor, make the rich pay more and we are the 99 percent.’’

Nearly drowned out by the ruckus, committee Chairman Steve Gottwalt, a Republican from St. Cloud, called for a voice vote and the umbrella bill passed out of his committee, despite dissents from DFLers. A few minutes later, the sergeant at arms and law enforcement ushered agitators from the room.

The wide-ranging bill is headed for the House Public Safety and Crime Prevention Policy and Finance Committee, still a trek from the House floor. Senate authors have penned similar bills. 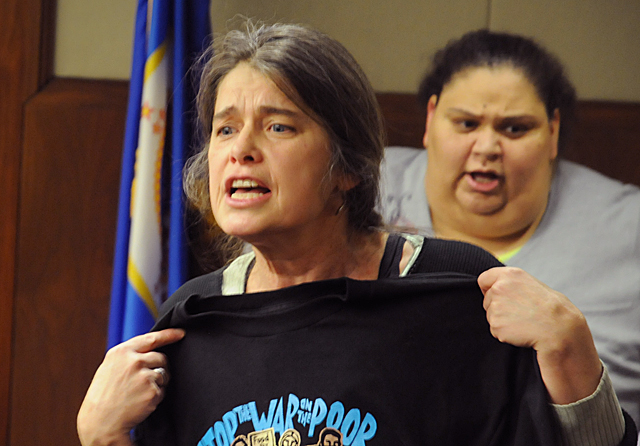 Deb Konechne of the Minnesota Coalition for a People’s Bailout leads other protestors in a chant against the committee.

It’s unclear if Gov. Mark Dayton would sign the legislation if were to reach his desk, but advocates for the poor recall that last legislative session Dayton held the line on cutting direct aid to people.

Other states toe that cutoff line, but Minnesota law currently allows families to earn up to 115 percent of poverty and still receive cash benefits through the Minnesota Family Investment Program (MFIP) with the idea being that extra support helps families stabilize their housing and living situations.

Additional proposals offered would: institute drug screening and disqualify from benefits those families with a family member having a drug offense dating back 10 years or permanently disqualify anyone who uses an EBT card to buy tobacco or alcohol even once.

Residency requirements would increase from 30 days to 60 days before some benefits would be available. A string of other proposals include geographical limits on the use of EBT cards, the modern-day version of food stamps.

In a brief interview before the hearing, Gottwalt told me the bills are “intended to tighten up those programs so money is being directed in the way it is intended. This is really about the integrity of dollars for people in need.

But is there a problem?

Jessica Webster, staff attorney for the Legal Services Advocacy Project, doesn’t think so. “All these proposals taken together suggest that our program is riddled with fraud and abuse and it is not true,’’ argues Webster. “The Minnesota Department of Human Services can really be proud of the low rates of fraud and abuse in our public programs. 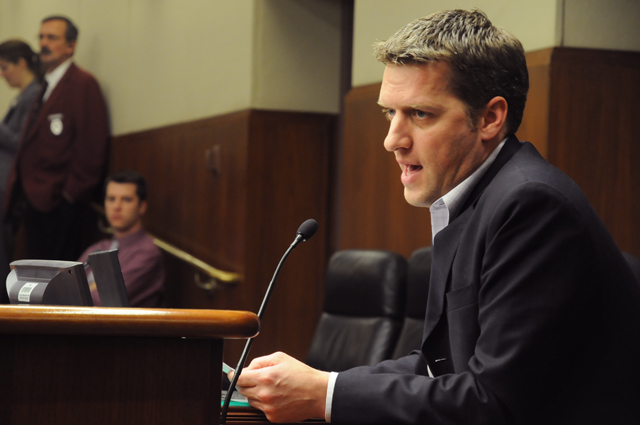 GOP Rep. Kurt Daudt introducing his welfare legislation, which would reduce public assistance, to the committee.

“It also suggests that legislators don’t really understand what is happening to families in the state and what poverty really looks like,’’ Webster says.

“We’re trying to educate legislators and the public that this is not reform… People in the poverty community see true reform as ending poverty, not increasing it,’’ she says, suggesting some proposals would inflate the numbers of poor people.

At the hearing, Republican Glenn Gruenhagen of Glencoe suggested everybody, including the poor, should support bills that eliminate waste and fraud because that means more money for the poor.

But Kim Norton, DFL-Rochester, took issue with proposed laws that would penalize children, such as a family’s permanent disqualification from benefits because an adult family member once used drugs.

“Every time we try to bring a hammer down on a parent, we bring it down on the child,’’ Webster told the committee.

Dan Kitzberger, policy director for the Minnesota Coalition for the Homeless, pointed out that 66 percent of MFIP enrollees are children.

Joe Soss, a University of Minnesota Humphrey Institute of Public Affairs professor and co-author of the book “Disciplining the Poor,’’ testified that asking the poor to pay up front for a criminal background check is “a kind of poll tax” for those applying for social service supports.

The legislation would require applicants for benefits to pay for background checks when there is a “suspicion” of drug use.

Soss called drug testing proposals a waste of taxpayer’s money, given the low incidence of drug usage among “welfare applicants and clients” elsewhere.

Amanda Koonjbharry, an employment counselor with Employment Action Center, spoke for the working poor. She talked about a client called Kelly, a young mom who works 30 hours a week making $8.50 an hour and receives $300 in monthly food and cash benefits through the state as well as child-care benefits while going to school.

Kelly’s income is 105 percent of poverty level, Koonjbharry said, but under the proposed law, the mother would be faced with giving up her job, losing her benefits or dropping out of school.

As legislators headed off to another meeting, Brian Rusche, executive director of the Joint Religious Legislative Council, lamented legislators’ actions, taken, he said, without lawmakers considering social-science research on the poor and their needs.

Instead of an anti-poverty program designed to help people up and out of poverty, Minnesota’s program is “becoming a poverty stipend,’’ Rusche said.