My close personal friend Amber C. in Asheville, North Carolina, explained to me this week that the state’s Republican-fueled marriage amendment will appear not alongside the state’s November general election but on the May 8 primary ballot.

Bleh. If the Republican presidential contest isn’t decided by May, a lot more anti-equality voters will show up than those who favor same-sex marriage freedom.

But there’s good news out of North Carolina: a new poll shows a 54% to 38% vote oppose the ban on same-sex marriage in the Tar Heel State.

What th’? Let’s hope Minnesotans catch up to the South’s new progressivism.

Reporter Beth Hawkins of MinnPost offered an in-depth analysis—okay, it’s a little depressing—of how the Minnesota Marriage Amendment will be decided on the power of the message. Fear-laden ads in California worked to convince voters that legalized same-sex marriage would result in, I guess, indoctrinated children begging to get beat up for identifying as gay. That darned homosexual agenda!

In Minnesota, TV ads and Internet spots in the months ahead will no doubt pry on people’s fears. Time will tell how successful groups will be with emotional messages of love and tolerance compared to the fear-based messages.

Also in MinnPost, information about a kick-off event in the unsexy (and hard to read) series called MinnPost Asks Presented LearningLife, a new series produced by MinnPost in partnership with the U of M’s College of Continuing Education. The opener, on April 12, features the excellent Richard Carlbom, executive director of Minnesotans United for All Families, who I saw speak last week, with Beth Hawkins and University of Minnesota professor Ed Schiappa.

What th’? It looks like Minnesota for Marriage hasn’t responded to an invitation to appear. I know the Pope has interest in what’s going on here, but I guess he’s busy that day.

Speaking of elections, the Minnesota Elections Board is investigating the National Organization for Marriage’s refusal to disclose who is funding Minnesota for Marriage. I confess: My wife and I gave $72 last year to MnUnited, which just announced a new $200,000 challenge. I also bought a couple of bumper stickers at an event last week for $2 each, which forced me to wash the salt off my bumper. 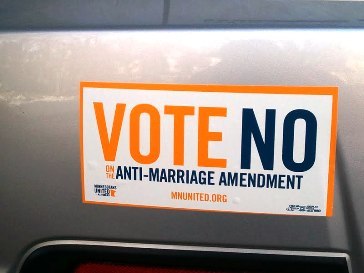 By the way, Adam has written a lot for The Christian Century and works with Project F-M, which describes its mission as “making space for 20/30-somethings to love God and neighbor by cultivating an open-minded, curious faith.”