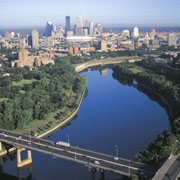 The website, NewGeography.com, recently posed the question: “What (and who) is a city for?” Which led me to consider the question: With all of the changes to the Twin Cities in recent years, how are we working for the betterment of all Minneapolis-St. Paul residents?

The author, Joel Kotkin, frames this argument between two possible options for metropolitan areas: luxury cities or opportunity cities. Luxury cities, such as New York City, Chicago or Los Angeles, are characterized as “entertainment machines” with blocks full of an amalgamation of “chic restaurants, shops, and festivals.”

The “less stimulating,” opportunity city, on the other hand utilizes urban life as a means to work towards upward mobility and improved well-being for the middle and working classes. These opportunity cities are, frequently, a destination for immigrants, promotion of housing equity and even diversity of industry and those who own the firms.

Which category should we belong to?

Minneapolis and St. Paul women, for example, own 33 percent of all firms (much higher than the national average). Furthermore, we have a 50 percent homeownership rate which the article cites as integral in attracting middle class families, and is in line with other major metropolitan areas, such as Dallas-Fort Worth, Denver and Nashville.

A majority of opportunity cities are in the middle swath of the country and, although Minneapolis-St. Paul is missing from this list as of now, we have the potential to be a strong, defining game-changer. This forward momentum can be tracked in Minneapolis Mayor Betsy Hodges’ first city budget, where equity and diversity of industry play a large part in Minneapolis’ future growth.

The general economic recovery, paired with Minnesota’s progressive policies coming from the capitol, has boosted Minneapolis and St. Paul’s likelihood for inclusion among these fast-growing cities. Kotkin iterates that, “to a large extent, this [city] growth is fueled by middle-class movement to regions that offer both economic prospects and more affordable housing prices.”

These economic prospects are defined by the diversification and development of industries that the Twin cities have already been doing. Revitalizing industrial jobs, adding STEM jobs as well as continuing mid-skilled job growth are all aspects that will continue to push the Twin Cities higher up on the list of opportunity cities.

The real question, then, is whether Minnesota can create and sustain the level of equity a title like ‘opportunity city’ implies. Our leaders have shown that they want to support open opportunity for all now and in the future, but we can challenge them to go further in creating this environment.