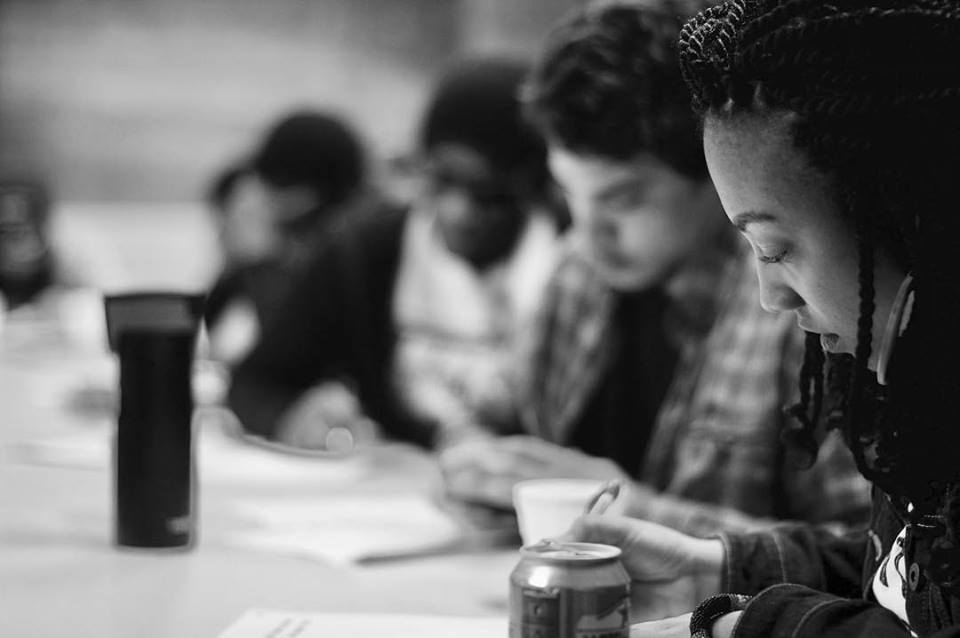 Black Lines Matter is one of the many programs the new organization Black Table Arts has created to cultivate spaces for Black joy in the arts scene. Photo courtesy of Black Table Arts.

For Keno Evol, Tupac – and by extension, hip hop – was his first gateway into art as activism. It was through hip-hop that a young Evol heard Tupac rhyme about the complexities of Black life in America and his hopes for community as a Black man. In his intros and outros, Tupac held conversation and Evol listened. So when Evol envisioned Black Table Arts (BTA), a pro-Black nonprofit arts organization, he went back to hip hop.

“Hip hop is what I want Black Table Arts to be at its best. Which is a mode for having fun, a mode for critical thinking, a mode for being socially engaged with the local landscape of community,” Evol said.

Evol, a poet by practice and executive director of BTA seems to have accomplished just this. Since 2016, his nonprofit has been creating spaces for Black creatives to gather and explore their arts through events like The Free Black Table Open Mic, Black Lines Matter writing workshop, a bonfire for Black creatives called The Glow and panel discussions such as Black Creatives Talk Sustainability. 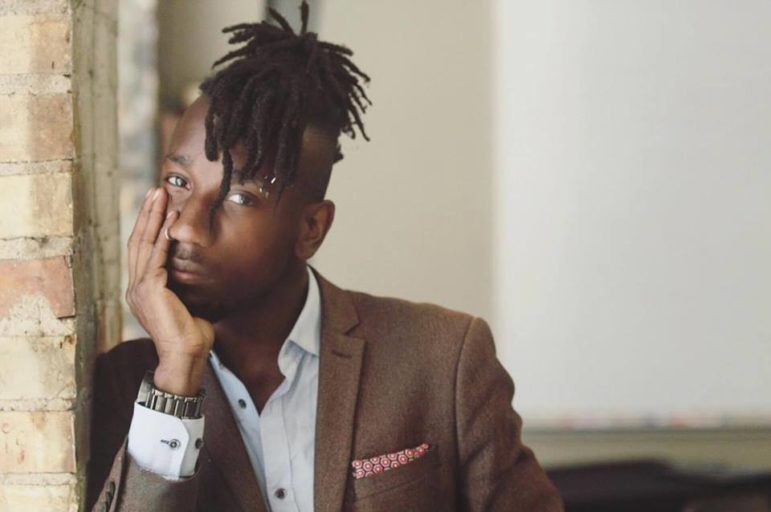 BTA appears at a time when the Black Twin Cities community is much in need of spaces whose focus is not only to congregate in the name of social engagement, but also to hone in on Black joy à la hip hop. The initiative follows another effort to create spaces for Black writers and other writers of color to write and share freely, such as David Mura’s Creative Writing for Writers of Color and Indigenous Writers workshop, also held at the Loft Literary Center. While both classes are open to the public, they are very strongly pro-Black and pro-people of color centered. BTA events over the last two years, from the fatal shootings of Jamar Clark and Philando Castile, to the vilification of the local Black Lives Matter movement and the election of President Donald Trump on an overtly racist platform have left communities of color often gathering in protest. What does it mean to have a space like BTA that intends to do the opposite?

“It’s pure magic that’s intentional and accessible. I’m a fan,” Nimo Farah, a local artist and activist who has performed at BTA-sponsored events said. “It’s young people inspiring each other and creating while paying respect to the creative and pioneering elders and ancestors that came before them.”

This paying of respect is central to BTA’s ethos whose mission seeks to conjure other worlds through Black art by connecting creatives and cultivating volume in black life. Here, conjuring is removed from the supernatural and the magical. Likewise the connection of creatives isn’t limited to the people in the room at events like The Free Black Table Open Mic. BTA relies on a long line of Black scholars, artists, writers and thinkers to evoke imagination and connect Black creatives, historical and present.

From Vincent Harding, who in writing Rev. Martin Luther King’s 1967 “Beyond Vietnam” sermon, penned the phrase “I am a citizen of a country that does not exist yet,” to Octavia Butler who wrote science fiction because “there were no walls to hem you in,” to Minneapolis’ own Chaun Webster who envisaged “resistance as a spatial phenomenon” in creating Ancestry Books, Evol’s practice of art – and BTA’s – is informed by these conjurings of Black thought. With this history of imaginative thinking inspiring future action, Evol and his team want encourage radical creativity – and creating with a purpose.

“It’s about being in the future, or dreaming about the future now,” Evol stated. “When I think of Black Table Arts, I think of sci-fi social work.”

The notion of ‘sci-fi social work,’ is the ability to engage with and solve social problems both in the present and future by changing the landscape in which the issues themselves emerge. Lakresha Williams, project manager at BTA added, “It’s about recognizing that artistry can be used as a weapon. For me, my artistry is service. How can that be used to influence the landscapes that we are creating?”

Talking to Evol, one can’t help but get carried away in his imagination of place and time, how he bends each to imagine a new way of being present. BTA, which sprang out of the successful Free Black Table Open Mic, is an organic extension of this in its creation of radical spaces for Black folks in Minnesota to mold their futures. Take for instance the approach of the BTA Open Mic which is open to the public and held at the Illusion Theater. Or the nonprofit’s other flagship program, Black Lines Matter, a writing workshop hosted weekly at the Loft Literary Center. Both events are open to the public, but they are very strongly pro-Black, with the sign-up sheet at Free Black Table Open Mic exclusively for POC artists. The creativity being nurtured and explored is that of Black artists.

“Our programs are public but we center Black joy and Black folks in a particular way that is unapologetic and folks have received that well so far,” Evol said. “There have been times where I have had to request people to leave, not by virtue of them being there but because they’ve done something in the space that was inappropriate or they’ve affected someone in the space that was inappropriate. But for the most part it’s been good.”

This centering has been a crucial selling point to BTA participants like Taylor Seaberg who regularly attends Black Lines Matter. A jazz/neo-soul/alt-folk guitarist, Seaberg has struggled to find welcoming spaces as a Black artist in the Twin Cities. The kinds of spaces that encourage banding together and a combining of joint skill sets as marginalized people.

For Seaberg, Black Lines Matter provides a “space to home in on my thoughts in a space that isn’t culturally violated or suppressed by whiteness. We talk about Black conjuring and Black spirituality in a way that separates itself from Western convention and share this cultural bond even if the context we come from is different.”

Seaberg also admits that the way artists navigate the room changes when the space is filled with just Black folks: what becomes spoken and unspoken, what is judged and who is critiquing is vital to creating liberated Black Art and the conjuring of other worlds.

BTA also sees itself, and functions, as an all-inclusive space for Black creatives. For instance, it’s Black Lines Matter classroom is intentionally multigenerational and multi-experience in an attempt to “uncensor hierarchy” Evol said.

“There is a particular sort of joy and intelligence that emerges in the community when elders talk to the young folks and young folks talk to the elders and there is more of a horizontal form of collaboration rather than hierarchical. We dialogue, we talk to each other in Black Lines Matter,” he said.

Zola Ellen, who volunteers at BTA as a photographer often brings her eight year-old son to Black Lines Matter.

“It’s been extra dope bringing him with me in an atmosphere where he is learning about his history, is being challenged to think critically, and share his thoughts. These are things he doesn’t get from school,” Ellen said.

The inclusivity of BTA goes beyond ensuring all age groups are represented in the creation of space as an act of resistance. BTA also makes room for Black queer and trans individuals who do not fit into heteronormative notions of what Blackness should be and remain doubly marginalized. Though Evol doesn’t identify as Queer, he believes that we have a responsibility to make visible those pushed to the margins by society. All while remaining conscious of our privileges in these contexts.

In March of this year, BTA sponsored Black Queer Ink. In partnership with Patrick’s Cabaret, the event invited Black Queer artists including Nimo Farah, Dua Saleh, Erin Sharkey, Simone Williams and BTA’s own Zola Ellen to share their stories and talents. In creating the space, Evol, “only wanted to be a bridge to gather that particular space.” He did not host that event or receive any dues from it. Through other events like Conjuring Other Ways Home – Writing On Black Adoption, Evol who is himself an adoptee is creating avenues for the multiplicity of identities present in the Twin Cities Black community to emerge and find their footing in the realization of new kinds of public spaces.

The future of BTA is perhaps best ensconced in Harriet Tubman’s last words, ‘I go to prepare a place for you,’ which Evol cites as a source of inspiration. BTA hopes create this place for future generations by establishing a non-conventional art center with the aesthetic of a home that can serve as a hub for gathering, the development of Black Art, late night events, and as a resource to those “who are Black, pushed on the edge of society and rendered invisible.”

“One unofficial slogan of Black Table Arts is, ‘We are the garden we need to grow.’ I’m interested in gathering and modalities of joy, preservation and kicking it. We believe there’s a pedagogy in kicking it,” Evol said. It’s safe to say, that Black Table Arts will be around, kicking it, for the foreseeable future.