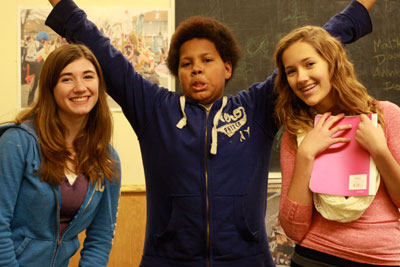 When Murray Junior High School sends 72 seventh- and eighth-graders up to Wolf Ridge environmental learning center in Finland each November, those students learn about more than northern Minnesota’s ecosystem and natural history. They learn about each other.

The students spend five days taking classes on subjects such as wetland ecology, geology, orienteering and animals signs. But four 50-minute sessions that week are devoted to classes that teach the students about the variety of cultures that make up their own school’s environment. Those classes are taught by the 16 eighth-graders chosen to be the student leaders for the trip.

“We are more alike than different,” is a theme that has carried through the decades-long tradition of going to Wolf Ridge, said Tim Chase, science teacher and one of Murray’s Wolf Ridge coordinators.

Teaching students about the variety of people in their community helps “a kid see that the student sitting next to him or her is different but the same,” Chase said. “They celebrate; they have special foods. We are different but alike. We are more alike than different.”

Murray students have made the trek to northern Minnesota since the 1970s, back when Wolf Ridge was at Lake Isabella and was called the Environmental Learning Center. Once lead by now-retired special education teacher Phyllis Baltes and the late Ann Bulger, volunteer coordinator at Murray, the reins were handed to Chase and English teacher Carrie Bittner about 17 years ago. “One of the main things we saw was the beauty and impact this trip had on the students,” Chase said.

Bulger introduced the culture classes to Murray’s camp curriculum. Bittner and Chase tweaked it by having the student leaders teach them.

The eight boys and eight girls start planning their culture classes about a month before the camp. This year, four groups of four taught classes on Hmong, Pacific Islander, Eastern European and Hispanic cultures. 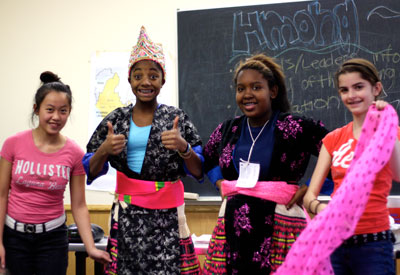 The classes reflect the variety of cultural groups represented at Murray.

One of this year’s leaders, Fiona Steen, remembers taking the culture classes last year as seventh-grader. “I thought it was really interesting to learn about the different cultures that we have in our city and getting an understanding of the kids at our school,” she said.

Students who attend the Wolf Ridge program are chosen through a lottery system that first sorts the candidates to make sure there is an even amount of seventh- and eighth-graders and boys and girls. The group is also sorted to ensure that the group represents the different ethnic groups at the school.

Student leaders are chosen through essays they write that demonstrate their leadership skills. Malik Murray said he wrote about his home responsibilities. He’s the oldest in a family of six children and often cares for his younger siblings when his mother goes to work. “I teach them responsibility and how to be leaders,” he said. “That’s what I wrote.” 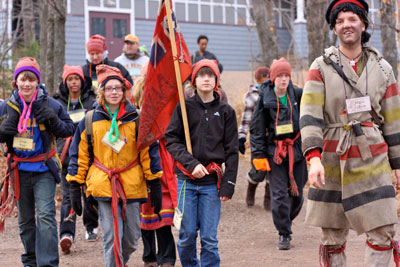 The cost of the trip for each student is $300, but grant money from the St. Anthony Park Community Foundation and other organizations help pay the tuition for those who don’t have the means to pay the full amount, Chase said. “All we ask of the student is that they give back to the community in some way. We credit their account $5 for every hour of community service done.”

To find out more about Murray Junior High School’s annual trip to Wolf Ridge and to see photos from past trips, go to http://murray.spps.org/wolf_ridge.html.

Above: Murray students participate in a voyageur workshop at Wolf Ridge.