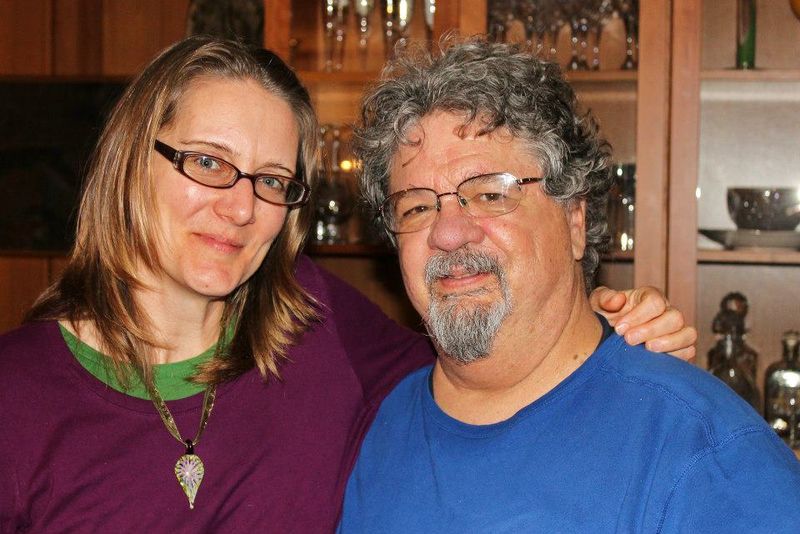 After a long day of rehabbing the rural Big Stone County farmhouse they’ve purchased together, Rebecca Terk and John G. White share stories and gumbo at the kitchen table in Terk’s home in Clinton. The couple, who will marry this summer, also share a core belief in the freedom to marry.

That belief is rooted in their values as rural Minnesotans: fair play and community.

Both transplants to Western Minnesota, Terk and White are “community people” who hold together life on the prairie. After moving to Minnesota two and a half years ago, Terk serves as a local food organizer for Land Stewardship Project, helping build a food co-op and farmers market in Ortonville. Macon, Missouri native White recently retired as the long-time editor of the Clara City Herald in nearby Chippewa County.

Along the way, the avid fisherman and angler picked up the prestigious “Riverkeeper” award from Clean Up the River Environment (CURE), an Upper Minnesota River Valley advocacy group. That love for the river and land brought them together following the death of White’s late wife, Sharon.

White speaks up first, his tired voice revealing traces of his roots in Missouri.

“My brother Bob was one of the first 2000 Americans to die of AIDS,” White said. “Every waking hour during his illness, his partner Truman was there for Bob.” White knows the experience of caring for a severely ill partner and how much married status made that tragic situation more negotiable for him and his late wife.

The retired newspaperman also sees marriage freedom as part of Minnesota’s traditional aspirations to treating all people fairly. After moving to the state, his son Jacob, a competitive Special Olympian, was able to receive growth hormone treatments.

“In Colorado, Jacob was denied treatment. We were told that the treatments should go to a person who didn’t live with mental disabilities,” White said. “Within three months of moving here, Jacob received the shots he needed. This saved his life.”

Terk grew up in Middlebury, Vermont, a college town where queer folk were out and accepted. She notes that while people in Western Minnesota are generally more reticent about their personal lives than in her childhood home, gay men and lesbians live openly, if quietly, in her adopted community.

“While the Ortonville Independent, the more conservative paper in Big Stone County, may publish letters about ‘the gay lifestyle,’ the truth is that gay and lesbian people out here share a lifestyle of combining corn and milking cows,” Terk explained.

She noted that the Northern Star, published in Clinton, is a more liberal paper that publishes few letters condemning anyone. “There’s an absence of vehement anti-gay rhetoric. People here are live and let live,” she said.

Terk believes that this general neighborliness in the sparsely populated county on the South Dakota border will diffuse the impact of passage of the bill to guarantee the freedom to marry for all couples, despite the fact that the county voted for the amendment to restrict the right to marry. Should Representative Jay McNamar vote for marriage freedom, neither Terk or White see that as a deal breaker.

White slipped off from the conversation, reminding Terk that another hard day loomed ahead in fixing up their new home. Terk stayed up a while longer, musing about the alternative of civil unions.

“When we were talking about getting married, I wondered if maybe I could just have another kind of arrangement–I’m divorced, been married before,” she said. “But unless gay and lesbian people also have the ability to marry like I can, it isn’t fair to everyone. People need to be treated fairly.”

Postscript: once Terk got a good night’s sleep, she collected her thoughts about marriage. From her email:

I went into my first marriage in my twenties (I’ll be 40 this year) thinking that getting married and having kids was just what I was supposed to do. I didn’t really have role models growing up who did anything different–or at least whose choices were presented as options. It’s not that I was pressured directly, only that it was always, “when you get married and have kids of your own….”

At that time, I didn’t feel I had the choice not to get married. In many states, gay and lesbian people don’t have the choice to get married. I remember having the cliched conversation with a dear friend that if we hit a ripe old age and weren’t married yet (either because we hadn’t found partners or because he couldn’t legally marry his), we’d get hitched. The point was to have that security that marriage provides–not that either of us cared about pretending to a “straight” marriage. I guess if people want to talk about the “sanctity of marriage,” then maybe they want people getting married because they want to, and not because they feel they have to.

And as I’ve gotten older and had more experience in life, I recognize that marriage is about more than just romance and house and kids and fulfilling some “model.” It’s about love and commitment, but it’s also about security–being able to know that if something happens to you or your partner, your spouse will be able to be there and to take care of you and of the things that need taking care of–and in the way you’d want. And they’ll be provided for, too. And because society benefits from the stability of married couples providing that security to each other, society gives full credit and respect to that marriage relationship.