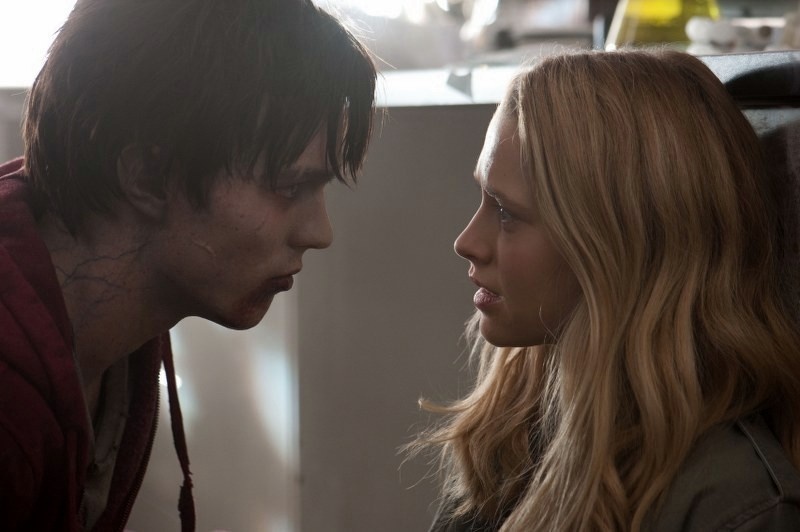 In zombie movies the dead come back to life. It’s a rule of the zombie genre. In order to have flesh eaters roaming the streets, the dead need to rise from their graves with an appetite for human flesh. But what if the dead, after rising with a need to feed, could experience a second awakening? What if they could reclaim their human side once again? This question is presented as the focal point of Warm Bodies, a film that looks into the issue of undead redemption, and has a lot of fun with it, too.

It’s eight years after a zombie outbreak spread with enough zest to kill nearly all humans and convert many of them into the living dead. Somewhere in the United States a group of humans numbering in the hundreds has barricaded themselves in a metropolis by building a concrete wall around a section of the city. The wall is not as shiny, durable, or high-tech as the one that surrounded a zombie-infested Raccoon City in Resident Evil: Apocalypse, but so far it’s gotten the job done.

Now, the people behind the wall may be all that’s left of non-zombified human life on Earth. Or maybe not. Whatever the case, Grigio (John Malkovich), the leader of the human survivors, is intent on keeping his people away from the gnashing teeth of zombies on the other side of the wall. Unfortunately, Grigio occasionally has to send men and women into the land of the dead on supply runs. Canned goods like fruit cocktail are plentiful on the other side, and Grigio’s people need to eat something. Participating in supply runs is Grigio’s young adult daughter, Julie (Teresa Palmer), Julie’s boyfriend Perry (Dave Franco), and Julie’s best friend Nora (Analeigh Tipton). They’re a group of young bloods for sure, but they know how to operate automatic weapons and take orders.

But even those militaristic skills cannot save the youthful group from the unpredictable savageness of an undead horde in the battle zone. On her latest apocalyptic grocery run, Julie and her friends are ambushed by a group of zombies. A bloody, panicked fight ensues. The end result: most of the squad are beaten and eaten, and not necessarily in that order. Julie does survive…though at a price. She’s taken captive by a zombie known simply as “R” (Nicholas Hoult), a zombie who can feel emotions and form thoughts. One look at Julie is all it takes for this young adult undead fellow to fall in love. He smuggles Julie back to his home: the interior of a 767 plane lying dormant on a lonely stretch of tarmac. It’s not long before R’s unusual behavior (falling in love with warm flesh rather than eating it) piques the curiosity of his best undead bud “M” (Rob Corddry) and eventually the rest of the nearby zombies, as R’s voyage into love sparks physical and mental changes within the crumbling flesh of the ungrateful dead.

Based on a novel of the same name by Isaac Marion, Warm Bodies is noticeable amidst a churning current of zombie films that have poured into theaters in the past decade; heck, it’s a solid addition to the zombie movie library stretching back to 1968, when Zombie Granddaddy George A. Romero reached into the trunk of his car and pulled out the film reel for Night of the Living Dead. It’s not the romantic aspect of Warm Bodies that makes it peculiar. Director/co-writer Edgar Wright did, after all, help create the term “RomZomCom” with his 2004 release, Shaun of the Dead. It’s also not the comedy portion of Warm Bodies that makes it one of the most revolutionary undead tales ever told onscreen. The late Dan O’Bannon’s The Return of the Living Dead provided a potent blend of hysteric hijinks and grisly gore back in 1985. Ultimately, it is the protagonist of Warm Bodies that sets it apart from other films that use a cannibalistic apocalypse as their setting. The hero isn’t some super survivalist with a strip of venison in one hand and a kick-ass ax in the other; it’s instead a young guy who’s already succumbed to the symptoms of a zombie bite: pale skin, memory loss, and an appetite for warm skin and steaming hot organs (yikes!).

The presentation of R is done in such a way that you can’t help but root for him within the first two minutes of the film. Jonathan Levine’s script, borrowing from Marion’s novel, allows R to give voiceover narration while he shuffles through airports and alleyways. Other than this mental narration, R can’t talk, at least at the beginning of the movie. He can only moan. R wonders what his life was like before the zombie outbreak. He observes fellow zombies and questions what they are feeling, if anything at all. R’s insights are heartfelt and somber, and It’s a rare occurrence when a lead actor of a talkie doesn’t have a whole lot of actual time dialogue (not including voiceover speeches) for much of the movie. But that’s exactly what Nicholas Hoult does, drawing heavily from his body language to convey emotion to humans and other zombies. Hoult uses intensity in his eyes and slight shrugs of his shoulders to create a compellingly communicative zombie. The dry tone of Hoult’s voice when narrating his actions characterizes R and reminds you that zombies, at least in Levine’s and Marion’s universe, are more than mindless carnivorous creatures.

Starring opposite Hoult as R’s forced love interest, Palmer continues her streak of playing coveted babes with brains (for instance, see Take Me Home Tonight, for the love of God, see that movie). With Palmer’s character Julie, being multi-dimensional is what it’s all about. Julie can handle a pump-action shotgun just fine, but that doesn’t mean she can’t get stressed out and teary-eyed when a zombie breathes in her face and forces her to come home with him. The real joy in watching Palmer’s character is seeing her relationship with R evolve from hysterical fear to a burning passion.

Fleshing out the supporting cast, Tipton, Corddry, Malkovich, and Franco add depth to the story by embodying characters that are interesting and easy to care about, so the weight of the entire movie doesn’t rest on the shoulders of Hoult and Palmer. Malkovich has his funny side sit out this adventure, as he surprisingly plays the part of group leader as straight and grim as a weary military general would. Corddry picks up the comedic slack, however, delivering straight-faced one-liners about relationships that make you howl with laughter and remind you that love has its funny moments, even when its between a woman and a corpse.

My only gripe about Levine’s film involves the way Franco’s character Perry is handled. I’ll leave out the details to avoid leaking spoilers, so don’t worry and please keep reading. Now, I don’t mind what happens to Perry; rather, it’s the reaction of Palmer’s Julie to the situation that disturbs me. The rest of Levine’s zombified world jives well with me, but Julie’s lackluster, almost mundane reaction to a certain incident involving Perry took me out of the picture for a moment because I couldn’t see Julie acting like that based on what Levine had showed us of her so far. If you watch the movie and think you know what scene(s) I’m writing about, shoot me an email and I’ll let you know if we’re on the same page.

It’s fitting that Warm Bodies will be in theaters this Valentine’s Day because a sweet love story lies at its core. This isn’t just a film for lovebirds, though. Zombie aficionados who’ve spent countless hours over the years ogling the juicy makeup effects of Tom Savini should run to a showing of Warm Bodies just to see all of the original ideas and thoughtful twists Levine and Marion have instilled in the zombie genre, a genre that will never grow as stale as the bodies of its monsters as long as creative gurus like Levine and Marion keep finding ways to keep the meat fresh.

Warm Bodies is rated PG-13 for zombie violence and some language. It has a runtime of 1 hour and 37 minutes and was given a wide United States release on February 1, 2013.