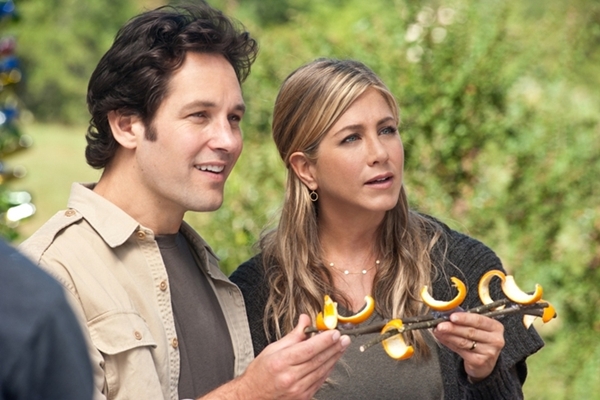 In writer/director David Wain’s R-rated comedy Wanderlust, an overworked Manhattan couple played by Paul Rudd and Jennifer Aniston lose their yuppie lifestyle after Rudd is downsized. Tired and out of sorts on the road to Atlanta where a new, dismal life awaits them, Rudd and Aniston find refuge for a night at Elysium, a place they think is just another bed and breakfast on the Georgian roadside. What they find instead is a community of eclectic characters who embrace a lifestyle comparable to residents of the 1960s Haight-Ashbury scene. This alternative culture setting for Wain’s latest film is a breeding ground for giggles, as long as you’re not too squeamish around graphic nudity.

Initially turned off by the Elysium after being chased down by its nudist resident (Joe Lo Truglio), Rudd and Aniston are forced to stay after a bizarre car crash. A few hits of weed and a campfire later, the two urban dwellers discover that they like living in a worry-free environment with people who shrug off the weight of modern technology. They decide to stay.

And then they take turns wanting to leave. Rudd and Aniston’s new roommates don’t really believe in privacy. Justin Theroux, a bearded man who thinks that Nintendo and fax machines are still the staples of technology, reminds the newcomers that doors are not allowed in Elysium because they interrupt the positive flow of energy. When Rudd tries to use the toilet, two people walk into the bathroom, take a seat next to him, and strike up cheerful conversations. Meanwhile, Aniston gets a little freaked out after a horse pokes his head into their bedroom.

The screenplay, penned by Wain and Ken Marino, does a great job balancing gross-out jokes with witty comedy. A slimy, spontaneous birth on a front porch, nude people running in slow motion from a runaway truck, and poop smears on skin are all used to full laugh-capacity. Luckily, Wain and Marino don’t write in too many of these types of jokes, because doing so would have made Wanderlust become stale after the first half-hour. Fast-talking, character-driven funny moments are instead dispersed throughout the film to dilute the strong scent of gross-out gags. In one scene, Rudd and Aniston find themselves in Elysium’s Truth Circle for the first time. No lies can be said in this circle. When Rudd and Aniston start talking, the Elysium residents get fired up. Let’s just say that the folks at Elysium don’t take lightly to niceties.

Rudd is fantastic as usual. Whether he’s playing a fiancée with no friends (I Love You Man) or a retail salesman coping with a breakup (The 40-Year-Old Virgin), Rudd always brings a twisted kind of energy to the table. With his glazed eyes and goofy smile, you can’t tell if he’s about to pass out or explode. An interesting sub-plot in Wanderlust involves the relationship between Rudd and Malin Ackerman, who plays an attractive free spirit. In Elysium, open sexual relationships are eagerly practiced. Ackerman wants to have sex with Rudd; she even tells him so. Rudd’s preparation for getting physical with Ackerman is the best part of the movie. Rudd stands in front of the mirror and runs through possible seduction lines that start out cheesy and end up being a mix of backwoods hillbilly and psych ward patient. You can tell Rudd is having fun with his material.

Aniston holds her own opposite Rudd. She doesn’t try too hard to be funny or act amused, and this conservative approach to her role made me forget that I was watching a former Friends star. Aniston brings some emotional weight to the film, as well. She’s a woman who’s never committed to anything for longer than a year in her life, and she finally sees a long-term future in Elysium. Aniston’s hope in beginning a new life-phase comes off as genuine rather than sappy.

Wanderlust benefits from its cast, but is dragged down by its ending. As was the case in Rudd’s previous film Our Idiot Brother, this movie has a five-minute segment in which all conflicts are neatly solved. This type of ending makes me think that the conflicts were never worthwhile in the first place. Why should I care about plot progression and ill-fated decisions by characters if everything is unrealistically guaranteed to turn out well in the end? I know comedies are expected to finish on a high note, but please, can there be a detour from the tired routine of “Oh, wait, I guess we never had to worry after all!” endings?

The unusual, entertaining people in Wanderlust make the film worth seeing, especially if you’re a fan of Wain’s previous work (a number of Wet Hot American Summer cast members are in Wanderlust). I bet good money you will leave the theater with a smile on your face.

I give this movie four stars out of five, in other words, a B+.

Wanderlust is rated R, has a running time of 1 hour and 38 minutes, and was released in theaters across the United States on February 24, 2012.