The Scout appeared borderline giddy about a proposed drive to Itasca State Park to see the state’s largest white pine. Mentioning that tree was like lighting a candle behind his eyes. He glowed.

That’s because the giant grandfather pine harkens to a time when our ancestors thrived beneath the broad sheltering boughs of thousands of pine trees. The Scout mourns the loss of those trees, and cherishes the final living reminder at Itasca State Park.

Artifacts discovered in 1937 at the Park’s bison kill site show that descendants of the Ojibwe and Dakota lived in the area as long as 8,000 years ago. Indians of the Woodland Period who lived in more permanent settlements and buried their dead in burial mounds came after the more ancient Indian communities. 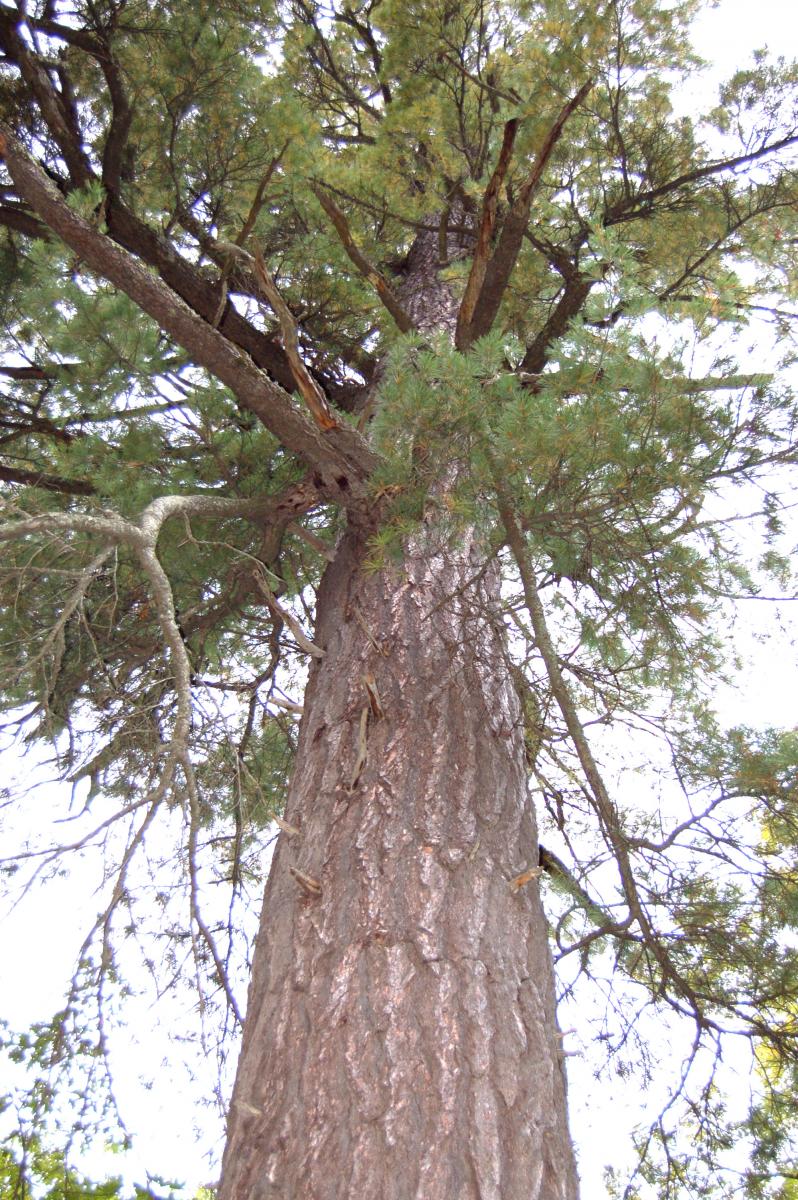 Eager to see the great big tree, we traveled north toward Floodwood on U.S. Highway 2 on an early October day. The Scout chatted away, snacking from an abandoned bag of garlic chips left in the company van. He described the drive as “primitive and desolate” because we would pass only one Indian casino on the way, the Northern Lights in Walker. The Scout views Indian casinos as the ideal rest stop for gasoline, potty breaks and the purchase of Cheetos.

So why do you think Floodwood is named Floodwood, he challenged as the vehicle trundled along. Do you think it has anything to do with floods?

It has to do with floods, I said.

Floodwood was named for an Ojibwe chief, the Scout said. He added as we passed through the city of Floodwood that the area was once a critical travel juncture for American Indians, a kind of water “freeway entrance” to Lake Superior.

Following the usual rambling conversation that included thoughts on Michael Jackson and Prince Harry, we arrived in Walker for lunch. Following consumption of a mediocre walleye sandwich (me) and beer cheese soup (him), we resumed our adventure.

The terrain quietly changes as you drive north, giving way to hardwood, pine and prairie land. Finally, we approached Wilderness Drive and the bison site on the southwestern shore of the lake. The air, nippy and drizzly, penetrated coats, chilling from the inside out.

The weather hardly dampened the Scout’s enthusiasm, which stemmed from more than his chance to revisit the big tree. Turns out the Scout is a gifted sculptor, and created the bronze sculpture called “Heartwaters Caretaker Woman” near the headwaters entrance.

He said that the day the sculpture was installed in 2005, a herd of baby turtles hatched and crawled all over the place, causing park staff members to freak out.

“They called and said they had never seen baby turtles there before!” the Scout said, standing near his sculpture of the woman. Her arms form like the land, her hair is shaped like wind and water, and the bowl she holds represents spilling water. The woman sits on a large turtle, surrounded by bronze baby turtles.

The day the real baby turtles descended on the visitor’s center and outlying areas, the electricity went out, causing park staff to further freak out.

The day we were there, a only a few of the half-million tourists who visit the Mississippi Headwaters each year were around. We walked to the river’s source, admired the view and group of ducks poking in the water, walked the big log crossing the river opening, and resumed our quest for the big tree. A five-minute drive later, we walked a path into the deep woods and beheld the great tree protected by a two-by-four wood frame.

The white pine’s bark is thick and heavily rutted, like a face that weathered countless storms. The long trunk reaches high into the sky before you see branches.

We walked around the tree a few times while the Scout recounted the days before the loggers took out all the giant pine. A guy in a light jacket joined us, glanced at the tree, told the Scout in a southern accent that this was his final stop on a river-long trip, and left.

We noticed his license plates on our way out. The car was from Louisiana, where the great river ends. The man drove a long way to see the headwater trickle and the tall tree.

We drove a relatively short distance that day. The Scout seemed content during the drive back to the Rez. He saw his Heartwater woman and turtles. He saw his tree.