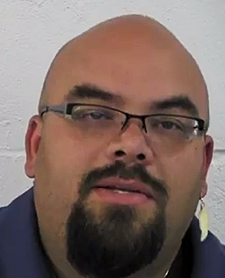 Jim Bear Jacobs’ work to get people talking about race and American Indian history started with a dream. The conversation begins Monday, Oct. 15.

His dream: “I was on a hill, overlooking an area, looking at a sculpture and the sculpture was a burial scaffold. And on it was hanging 38 feathers to commemorate the 38 Dakota warriors hanged 150 years ago.”

For weeks, asleep or awake, he couldn’t shake the memory of it, realizing how it symbolized the mass hanging at Mankato in 1862 of 38 American Indians at the end of the United States-Dakota War. But he wasn’t seeing the dream’s significance.

Then, revelation: He grew to see the dream as a spiritual calling to bring the historic events of 150 years ago this December to the attention of the wider community and to get people to begin to understand the impact, even today.

Too often, he says, the wider culture ignores this indigenous population and has little knowledge of its history.

Suddenly his involvement with the St. Paul Interfaith Network (SPIN), and their efforts to address racism, differences, stereotypes, peace and violence made sense.

Oct. 15 Jacobs and a group of other volunteers from SPIN, which is hosted by the St. Paul Council of Churches but involves diverse faith congregations and communities, open a series of four fall community conversations called “Remembering and Honoring Dakota Stories” ( also Wokiksuye K’a Woyuonihan).

The event kicks off at 7 p.m. at Anderson University Center at Hamline University in St. Paul with the showing of the documentary film “Dakota 38,’’ an enactment of a 330-mile horseback journey from South Dakota to the hanging site in Mankato. Following the film Lakota Spiritual Leader Jim Miller and Alberta Iron Cloud, Oglala Lakota, will have a conversation with the audience.

The next three Monday evening sessions will continue with the presentation of Dakota voices, including a tribal historian, a spiritual leader, an educator/activist, a descendant of the Dakota 38 and American Indian students sharing their hopes for the future at the American Indian Magnet School, 1075 E. Third St. in St. Paul.

Jacobs is also instrumental in arranging other evening showings of the documentary and appearances by Miller and Iron Cloud at 6:30 p.m. Oct. 16 at Benson Great Hall at Bethel University in Arden Hills and at 7 p.m. Oct. 17 in McNeely Hall at the University of St. Thomas in St. Paul.

On a related note, a display of works by 20 American Indian artists created in response to the 1862 war is now open at the James J. Hill House Gallery, 240 Summit Ave., St. Paul, through Jan. 13.