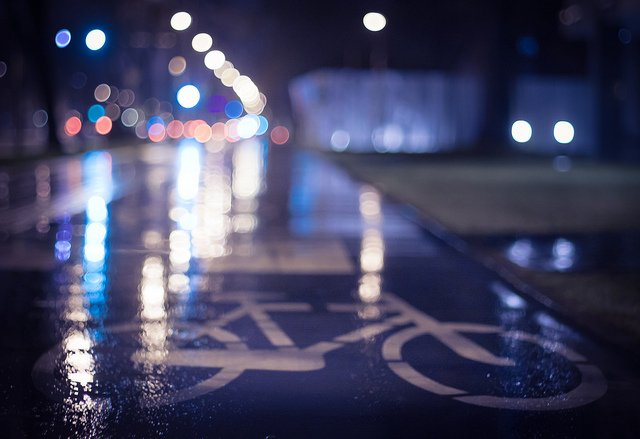 The Twin Cities are regarded as America’s litmus for bicycling. Minneapolis has been rated the number one bicycling city, while Bicycling Times lauded “the nation’s finest network of off street bicycle trails”. Former Mayor Rybak told visitors: “Biking has become a large part of what we are.”

Against that rosy backdrop, a rather disturbing and dangerous metamorphosis is emerging when darkness falls. No, the twilight isn’t bringing out vampires, but similar swift, stealthy apparitions are darting and careening across the city. From Hiawatha to Hennepin, from Snelling to Lake Street, bicyclists are taking advantage of a state without sufficient safety regulations nor enforcement, spinning from dusk to dawn without lights or helmets.

“It was approaching midnight and I was taking a right out of an unlit parking lot. I took a quick look left and right and started to press the accelerator. Just then, out of the corner of my eye, I caught the faintest movement in the darkness. I instinctively jammed the brakes not even knowing for sure what it was—two bikers wearing dark clothing and no bike lights. The uneasy thoughts of What If– ran through my mind the rest of the evening.” Bob S. Minneapolis

It has been a somber 2014 in terms of bicycle fatalities. Recent high profile tragedies occurred in Oak Park Heights as well as two incidents in South Minneapolis. At the time of those accidents, the clock read: midnight, 2:30 a.m. and 10:30 p.m. Those periods certainly reflect a confluence of risky driving behavior and low visibility. In one of those accidents, the biker wore no helmet and had no lights. In response, we set out on a trek to measure the safety readiness and behavior of Minneapolis cyclists.

Over the course of four days, we conducted a survey of 90 bicycle riders across Minneapolis. We traversed the most popular bikeways: Park Avenue, Portland, the Midtown Greenway, Lake Street, Franklin, 28th Street, Hennepin and Lake Harriet Parkway. After sundown, we recorded bicycle equipment including helmet, lights and reflective gear. The chart below displays an alarming trend that 42 percent of riders after dark are riding without a front light, required by law. At the same time, another 53 percent of riders are not wearing a helmet. Finally, a paltry 6 percent of riders are wearing reflective vests or belts. 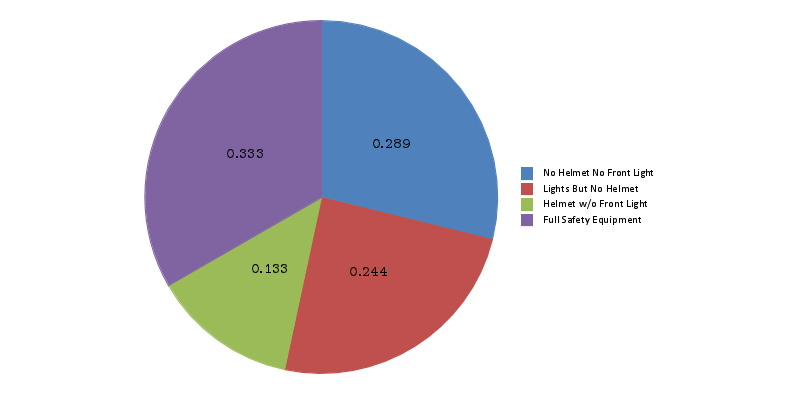 Why are these indicators foreboding? On the national scale, bicycling fatalities rose 6.5% in the last year1. On the state level, Minnesota is on pace to record the same number of fatalities (7) as last year. Given the large human toll involved in any accident, it may be instructive to compare Minnesota levels with U.S. military bases that enforce stringent safety standards as well as a hyper-biking city of similar size—Portland, Oregon. Portland registered another zero fatality year in 2013, its sixth since 2000. On the military side, we investigate their tougher regulations that have spurred fatality rates far under the rates of the general population. Specifically, U.S. Air Force facilities suffered one fatality in the last 5 years.

Air Force Staff Sargent Korey Randgaard comes from a three-decade Marine and Air Force base background. She weighs in: “It’s crazy that a great cycling market like the Twin Cities enables bikers to ride without reflective gear, helmets or lights after dark! Those are staple regulations for any military base.”

A review of Minnesota bike laws reveals that the state is one of 29 that have no helmet laws of any kind. It is important to note that Minnesota (as well as Minneapolis-St Paul) does indeed mandate lights after dusk or during periods of insufficient light. Front lights must be illuminated and visible at a distance of 500 feet. The state is also on par with industry (ANSI) standards for the rear reflector which manufacturers install behind the seat. This reflector can be static or flashing. The state does not require reflective equipment or apparel.

On the Portland side, what are they doing differently from Minnesota and the Twin Cities? Unlike Minnesota, Oregon is one of 21 states with a mandatory helmet law for riders under 16 years of age. Although research is mixed, a Journal of Pediatrics ten- year study tracked a 20 percent reduction in injuries, in states adopting this measure. In addition, the City of Portland web-site prominently communicates its bike light policy, even going as far as to publish a legal guide about liability. There is a section warning bikers they can be cited or arrested when deemed to be invisible during a night time accident.

The path to tighter bike legislation has been fraught with peril and potholes. Despite the fact that 70 percent of fatalities are linked to head injuries, a survey by the medical journal BMI found that 68 percent of respondents were opposed to mandatory bicycle helmet laws. Indeed a recent effort to implement such a law in the Washington D.C. area languished and never made it out of legislative committee.

The survey highlights a lawless ‘Wild West’ environment with city bikers ignoring or unaware of the current law. Without laws or enforcement, bikers are taking safety matters into their own hands. In the face of rising national fatalities and effective options implemented by the U.S. military or in Portland, have we arrived at the same safety crossroads Ralph Nader pioneered in the Sixties? His book ‘Unsafe at Any Speed’ took on an auto industry spending 23 cents in new investment on safety each year. There may be a parallel with the big automakers ignoring seat belts while today a bicycle reflecting belt costs a dollar or two and would save a number of lives?

Both Minneapolis and St. Paul have announced ambitious plans to double their bikeway systems. Minneapolis is promoting its industry-leading Midtown Greenway bike freeway, soon to be outshone by the opening of the landmark $3 million North Pacific tunnel linking the ‘U of M’ and downtown. There may be an intrinsic conflict in promoting more stringent safety measures when the larger mission is to increase ridership and the city’s positioning on a national stage?

Jim Titus, Washington Area Bicycling Association board member noted: “If you’re not allowed to ride a bike without a helmet, often that means you won’t ride a bike.”

With hundreds of riders unsafe and unseen every day, now is the time for the Twin Cities to elevate safety standards to the same heights as their system and infrastructure.

“If you choose the lesser of two evils, you will get the evil of two lessers.” Ralph Nader

Retired after 31 years in marketing for United and Northwest Airlines, Tony has been published by MinnPost, Air Cargo News, The Forward, CNS Air Cargo Focus, and the Rake. He has won a Silver Addy award in Advertising and recently launched United Cargo’s Friendly Skies ad campaign.