Inner city neighborhoods, particularly, have worried public-health officials who want to expand the availability of nutritious foods for low-income families.

But fresh research from the University of Minnesota, while far from suggesting that food deserts aren’t a problem, does indicate that lower-income Minnesotans who receive government aid to put food on the table go the distance for their food buys.

“Decisions about how and where to shop are often shaped by social networks and available transit options,” said Jerry Shannon, who studied the grocery-buying habits of 275,366 SNAP recipients in the seven-county Twin Cities’ metro area in 2009-2010.

Shannon also interviewed 38 low-income residents living in south and north Minneapolis between November 2012 and April 2013 about their food-buying habits.

Shopping outside their neighborhoods is a pattern even in north Minneapolis and lower-income neighborhoods of St. Paul where large discount grocery stores are located, Shannon said in a phone interview about his study: “Rethinking Food Deserts: An Initial Report of Findings,” which was recently published online in the professional journal Social Science & Medicine.

“You can’t just assume people shop where they live,’’ an assumption that has often been made, explained Shannon.

Big cities across the nation have initiated efforts to lure super stores, box stores and big groceries into inner-cities. Minneapolis has encouraged the selling of fresh fruit and vegetables in mom and pop groceries.

Shannon used data supplied by the Minnesota Department of Human Services and the United States Department of Agriculture to construct an interactive graphic showing where people buy food. His research reflects SNAP purchases at 1,304 stores in the metro area, including “super stores,” mid-sized groceries, corner stores, meat markets, specialty stores and farmers’ markets. The project was part of his doctoral program in department of geography at the University of Minnesota. He now teaches at the University of Georgia in Athens, Ga. 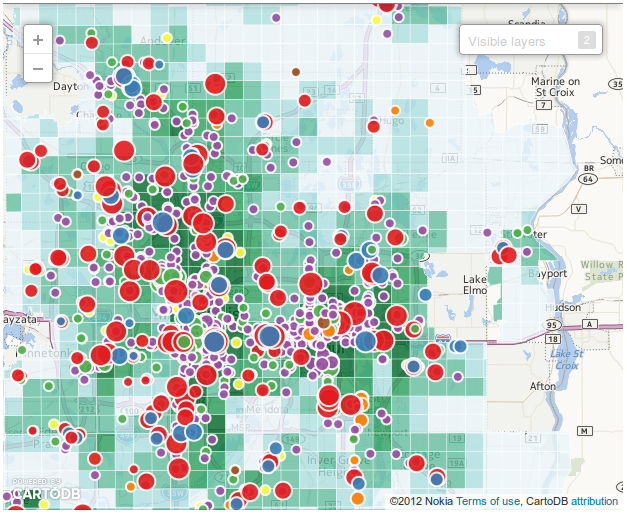 Participants interviewed for the study were given GPS-enabled smart phones that tracked daily movement and which they used to “take pictures during their food shopping’’ during a five-day period, Shannon said.

His follow-up conversations with participants revealed reasons for shopping where they did and how they traveled to the stores or restaurants, including by public transit and by private vehicle, their own or borrowed.

Shannon said there is a need for further research. “We need more sophisticated ways about seeing how people access the food system.’’

The research comes at a time when health journalists and researchers around the country are calling for more access to federal food-aid data to track such issues as fraud and how much of food-stamp money goes to purchase fruits and vegetables versus snack foods and soft drinks. A federal appeals court ruling this week could make that possible.