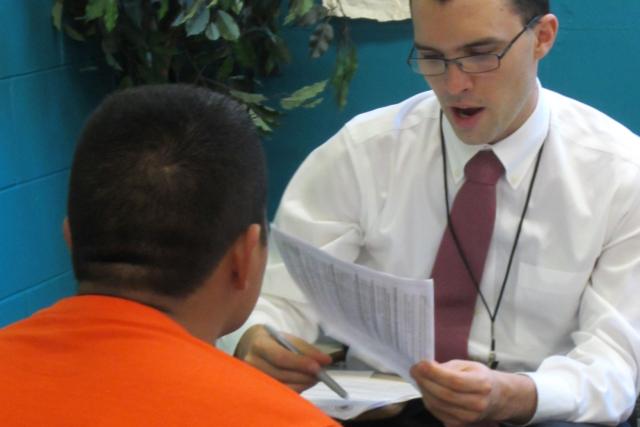 He calls himself Julio, a well-spoken, well-dressed and cautious young man considering an action that could lead him out of the shadows of life in America into a much brighter future.

Born in Guatemala, Julio is an “illegal,’’ his family having walked him as a child across a river from Mexico to El Paso, Texas, with no immigration papers. Yet since he was 7 years old he has lived as an American, growing up in its cities, being educated in its schools.

“We are Americans in every way except on paper,’’ Julio, 30, says in fine English.

Hope and the dream of becoming Americans and prospering drew Julio and some 400 other low-income and undocumented people to a workshop — one of several — sponsored by the Immigrant Law Center of Minnesota on Monday at Our Lady of Guadalupe Church in an Hispanic neighborhood of St. Paul. 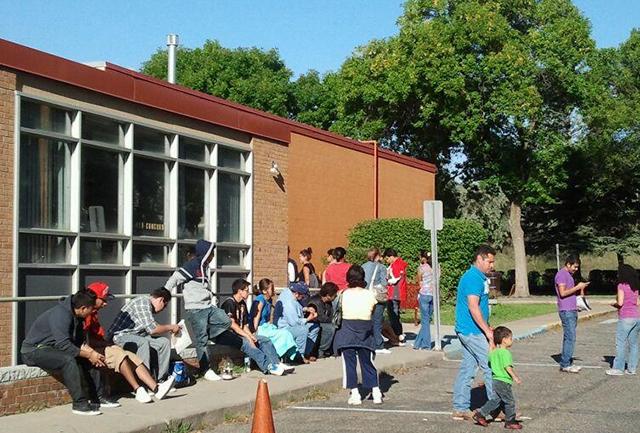 Our Lady of Guadalupe church in St. Paul hosted the workshop. (Photo by Felipe Illescas)

Thousands more around the nation are flocking to similar information sessions, though the program promises neither citizenship nor a green card. More than one million people may be eligible.

The mood at the church is serious. People, mainly Hispanic, are there to hear about President Obama’s new deferred deportation plan for certain illegal immigrants as young as 15, educated, lawful people like Karina, Angelica, Laura and Karla, who didn’t choose to enter the United States illegally.

I came to hear their stories, with MinnPost agreeing to their revealing only their first names because of their fear of deportation.

The plan, instituted by executive order, is both hopeful and precarious.

Already, a legal suit contesting it has been filed by 10 immigration and customs officials helped by an attorney who is an immigration adviser to GOP presidential candidate Mitt Romney. Opponents argue the order circumvents the wishes of Congress.

In St. Paul, Fatou Njie, a legal resident from Gambia in West Africa, whispers a question likely in the minds of many: “What happens if Obama is not re-elected?’’

That’s an unknown, John Keller, an attorney and executive director of the Immigrant Law Center tells me, but these youth are in a difficult position..

“The realization is the status quo of these young people’s lives is abysmal,’’ he says. “If the choice is between the status quo with no doors being opened and one door a little open, es el primer paso, a first step.’’ 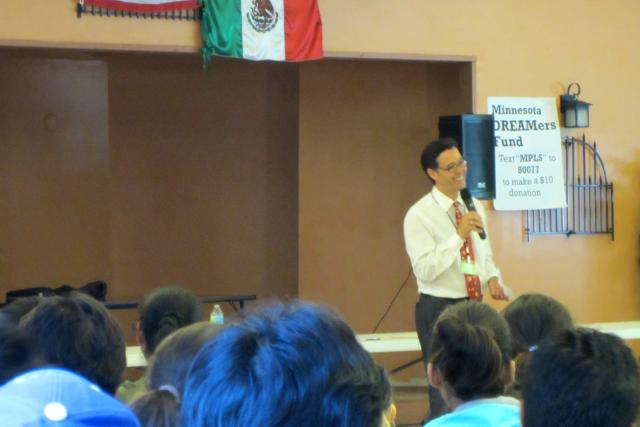 There, in the church social hall under the benevolent gaze of a Virgin Mary painting, they listened attentively as Keller gave specifics of the program implemented through the Department of Homeland Security that promises the cream of America’s young “illegals,” the so-called DREAMers, a chance to stay in the United States legally for at least two years if their application for deferment is accepted.

It does not offer citizenship or permanent residency, but rather a chance to prove themselves and a possible path to a more secure future.

Acceptance means being able to apply for driver’s licenses and Social Security numbers, which qualify workers for better-paying, more stable employment and scholars for student loans, internships and financial aid. For others the hope of a better future may lead to more students staying in school.

Yet Keller, speaking in Spanish, advises caution, spelling out the details of the program so only those who qualify will apply and advising those eligible take advantage of the legal help his organization offers, with the aid of a fund lunched recently by the Minneapolis Foundation, a financial sponsor of Community Sketchbook.

Maybe, Keller says, legal experts will find would-be applicants are instead eligible to apply for permanent residency or a green card. It’s hoped, he tells me, that people will be able to renew their exemption from deportation when their two years run out.

He says, “tell the truth,’’ explains translator Karina, a University of Minnesota student majoring in sociology and Chicano studies who is also here to begin the deferral process.

Born in Mexico, Karina crossed the Mexican-American border in 2001 at age 9 with her grandmother to escape poverty and to join her mother who had a stable job and home for them here.

A college senior whose tuition is being paid for by a private, anonymous donor, she says the reality of her illegal status and the fact that makes her ineligible for a Social Security number, hit her recently. “What am I going to do? I’m going to have two degrees and I can’t even get an internship. I was losing hope a little bit,’’ she says.

While two of her siblings dropped out of high school because they saw no future in education, she aimed higher. “I want a better future. I want to be a model. To have a better future one must have an education to get ahead in life,’’ she says.

Karina hopes the deferral will allow her to go to graduate school and start a career in education administration with the aim of bettering the graduation rates for Latino students.

After the presentation she will be one of 120 people lucky enough to walk away with an appointment to consult with a lawyer. Earlier this month about 300 persons attending a similar workshop in Minneapolis did the same. Monday, 20 more applicants were put on a wait list. Twenty other people were deemed ineligible.

The state demographer estimates between 2,500 and 4,100 Minnesotans could qualify for the deferral program.

I talked with hopefuls.

Julio tells me he is hard-working and law-abiding, that he thinks he qualifies for the program, if only he can gather all his documentation, including a birth certificate, but he wants to be sure, to “have all my ducks in a row,’’ he says, before applying.

He wants me to know he believes the United States has the right to protect its borders from people who enter illegally. Only, he was a child when he came here. What was he to do, run away from his parents rather than cross illegally into the United States?

At his side is his sister Angelica, age 24, a certified nursing assistant and single mother of the 6-month-old in her arms and a 7-year-old. Born in Guatemala, Angelica says she was carried illegally into the country in her mother’s arms.

Her dream? “I would be able to go back to college and keep pursuing my nursing. I’ll be able to live better, literally breathe better,’’ she says.

Hugo Gamaliel Nunez, 25, is the exception in the group, giving me his full name. A high school graduate boasting of a 2.7 GPA and a handful of outstanding academic achievement awards, he needs a Social Security number to apply for college loans.

Brought here by his mother from Guadalajara, Mexico, when he was 3, he’s been getting by being self-employed, doing roofing and scrap metal work, or was until, he says, he was assaulted and robbed. A friend reported the incident and his illegal status came to the attention of immigration and customs officials.

“This would make a huge impact, basically bettering myself, give me opportunities I have never had before,’’ Nunez says.

Nineteen-year-old, dark-haired Laura, too, was born in Mexico. She came here at age 8 with her parents, who overstayed their visa.

“I’m hoping to get the permit so I can go to college, work and get my license,’’ she says, while comforting her 7-month-old baby. She wants to study criminal justice or psychology.

Friend Karla, 16, enrolled in a Minneapolis high school and earning ‘A’s and ‘B’s, is nervous and has questions.

“You’re scared, what if it’s not true? When I heard it’s a permit for like two years, I’m like what can you study for two years? What if it’s not going to happen like they said it would?’’