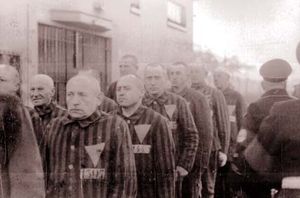 During last fall’s debate over the amendment to restrict the freedom to marry, one of the spokesters for Minnesota for Marriage (M4M) compared the tactics of Vote No supporters with Adolf Hitler’s Nazi regime. M4M quickly repudiated the claim, but has revived the trope in news materials for April 7 church-based organizing.

The coalition that advocated last year for a constitutional amendment banning same-sex marriage in Minnesota has continued to fight as legislators now consider a marriage equality bill. The so-called “Minnesota for Marriage” coalition is urging pastors to use their sermon on April 7 to take a stand against same-sex marriage, and the provided materials — a “Sermon starter,” accompanying PowerPoint presentation, and bulletin insert — are gratuitously anti-gay. Notably, one passage not only condemns gay people as having a chosen behavior, but then compares the LGBT movement to Nazis for peddling untruths:

Third, there is a definitive problem. Homosexuals claim: “We were born this way; it is in our genes; God made us gay.” They cite old “gay gene” studies predominantly conducted by researchers who are homosexuals; studies that have been repudiated by credible research. Yet these same biased and discredited studies have been widely publicized by the liberal media as true and factual. They essentially practice Joseph Goebel’s Nazi philosophy of propaganda, which is basically this: Tell a lie long enough and loud enough and eventually most mindless Americans will believe it. . . .

. . . To sum up: LGBT activists use Nazi propaganda techniques, homosexuality is comparable to promiscuity, adultery, and pedophilia, and gays are sinners who have “perverted and twisted desires.”

M4M and other opponents to marriage freedom have been distorting the arguments that Minnesotans United for all Families and other amendment foes made, as we’ve explored in a series of posts: Draz missed Winona Daily News coverage of campaign against marriage amendment, and Yo, Draz: MN United, Project 515 Education Campaign recycle “Grandparents” ad from 2012 and Don’t lie to children: at MN capitol, NOM leader Brian Brown lies to (and about) adults instead.

What’s just as awful is M4M forgetting about its own arguments–and apologies–last fall. A backgrounder issued today by Minnesotans United cites three instances of M4M rejecting the Nazi tactic analogy:

Additionally, WCCO reported that “A spokeswoman for Minnesota For Marriage said the group doesn’t support Brandon’s statements.” Autumn Leva – who still serves as a spokesperson for Minnesota for Marriage and is registered in Minnesota as a lobbyist on behalf of that organization – said in October 2012 that “We’ve since, very seriously, discussed this with Pastor Brandon, and explained… drawing an analogy to Hitler and Nazi Germany isn’t the right way to go.”

In that same report from WCCO, Pastor Brandon’s apology included the following: “it was a terrible mistake to even mention Nazism in an attempt to illustrate my point, and I fully understand why many found it to be offensive. I sincerely apologize for making this very inapt reference. In no way was I attempting to equate the marriage debate with Nazism and I profoundly apologize to anyone who felt that was my objective.”

But Nazi analogies weren’t the only arguments M4M rejected in 2012 that are picked up in the group’s new material. There’s that verse from Levitcus, for instance.

The Leviticus hacking flap: that was then, this is now

In the “Sermon Starter” by Dr. Kenyn Cureton, there’s also this:

Note the how that verse is now 20:13a and there’s an ellipsis, meaning that some text is being left out. There’s a rich backstory in M4M’s recent social media experience stemming from a surprise Facebook posting of that verse.

In June 2012, Javier Morillo-Alicea posted in BREAKING: Minnesota for Marriage Claims to be Hacked after Leviticus Quote Shows Up on Facebook Page:

Just last week the Minnesota Council of “Respectful Conversations Project” to encourage civil religious dialogue about this fall’s vote on an Amendment to limit the freedom to marry.

About nine hours ago (and counting) this quote was posted on the Facebook page of Minnesota for Marriage, the campaign supporting the Amendment:

“If a man has sexual relations with a man as one does with a woman, both of them have done what is detestable. They are to be put to death; their blood will be on their own heads.”

Jeremy Hooper has a screen shot here. While they’re still up, go ahead and read the comment thread.

Andy Parrish, the spokesman for Minnesota for Marriage, claims in a tweet:

My Twitter, Facebook, @gmail.com @me.com were all hacked and garbage was posted on the MInnesota For Marriage FB. I won’t be intimidated.

It’s curious that, although all of his accounts were hacked, only the Facebook page got the Leviticus love.

But, wait a minute – is Parrish saying that some quotes from the Bible are garbage?

Now that we can agree that the Bible and Leviticus in particular can be used to justify all sorts of stuff we might today consider “garbage” — maybe now we can begin that respectful dialogue?

But now that verse is suggested for the pulpit? Lovely, of course, it’s not the first time M4M has flipped its position on this verse, as Bluestem first posted in M4M disavows Leviticus 20:13 verse used in October letter it promoted on Twitter.

Isn’t that nice? Surely, comparing gay marriage advocates to Nazis and citing homicidal scripture will surely help the conservative party brand recover from its current market position as the enclave of scary old guys. We feel for our conservative young friends, most of whom support marriage freedom.

And there’s more to the Nazi analogies as well On October 22, 2012,Bluestem noted in The unbearable victimhood of Vote Yes and the flaming lavender stormtroopers of love:

And the career of Pastor Brad Brandon. Nor is this the first time that Brandon’s connection with M4M has been questioned. Back on July 19, 2012, LGBTQ blog Good As You wrote in Is MN For Marriage campaign about comparing gays to alcoholics, pedophiles & Hitler? Because someone on its payroll has:

Back when he was appearing on the National Organization For Marriage’s summer tour, this site dug up audio in which Pastor and local radio host Brad Brandon compared “Satan-influenced” gays to alcoholics, pedophiles, and Hitler, before then saying that we have to “get [gays] saved and get ’em out of that lifestyle.” Audio that our pals at Think Progress then put into a handy YouTube video:

Good As You went on:

So I have to wonder:why is the Minnesota for Marriage campaign, an effort supposedly focused only on civil marriage, compensating this same Brad Brandon to the tune of $3,000?

Are they prepping an ad featuring Brandon? Is he doing paid outreach work? Something else? Only MN For Marriage knows for sure.

So not only do we have yet another example of a campaign against civil marriage thumbing its nose at any separation between personal faith views and shared public policy, but here we have it coming from a person who leaves not one shred doubt about where he stands on gays (like alcoholics and pedophiles) or what his endgame his (getting gays “out of that lifestyle”). This is what MN For Marriage is recruiting!!

Then again, this Minnesota fight is one that has roots in Michele Bachmann, someone who has said homosexuality is “part of Satan I think” and compares lawmakers who don’t support marriage amendments to soldiers who missed Pearl Harbor’s warning signs. Perhaps the bigger surprise would be them confining this conversation to the civil policy realm where it belongs.

Go check it out, and google a bit yourself. Bran Brandon should be no stranger to the Twin Cities media or local socially conservative Republicans. Back in 2010, Hart van Denbrug wrote Rev. Brad Brandon wants his GOP endorsements to be tax exempt.

“We as Christians, as followers of the lord Jesus Christ, we need to be bold in such a time as this,” he said. “This is an assault on our culture and I don’t think god takes it very lightly when we mess with the image of Jesus Christ.

. . . .Brandon’s was among several other speeches at the Capitol. Here are some highlights.

The Minnesota Family Council’s communications director, Chuck Darrell: “God’s design is for marriage between a man and a woman.” . . .

Photo: Not only are LGBTQ folk not nazis, they were among the victims of Hitler’s most inhumane policies; the story of the pink triangle relates and commemorates this chapter in LGBTQ history. In recent Minnesota history, the pink triangle also played a part in the retirement of Representative Arlon Lindner.