Once again researchers at the Institute on Race and Poverty at the University of Minnesota have crunched data showing that charter schools as a whole underperform comparable traditional public schools and are more segregated.

That means, according to the latest “Failed Promises” study by Myron Orfield and Tom Luce, that Twin Cities charter schools aren’t delivering promised academic gains in spite of the fact that a high proportion of charters are essentially single-race schools.

Grouping students by race or ethnic background has been touted by some as a sort of gold ring, the attainment of which would lead to higher academic performance as well as to closing the academic-achievement gap between races. 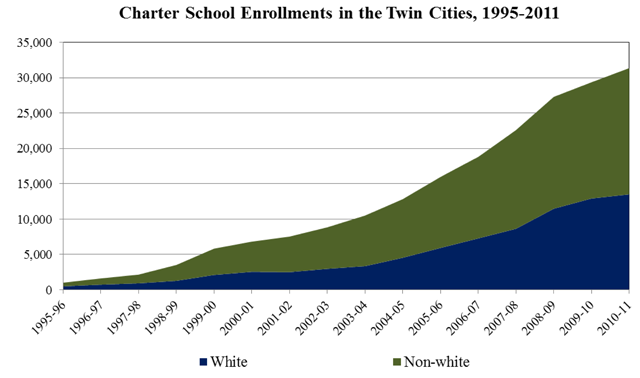 A high proportion of the charters are also “essentially single-race schools,’’ the report says. For instance, in 2010 to 2011, 89 percent of black charter students attended segregated schools, up from 2000 to 2001. “Hispanic, Asian and Native American students were also roughly twice as likely to be in segregated settings than their traditional school counterparts in 2010-2011,’’ the study reports. 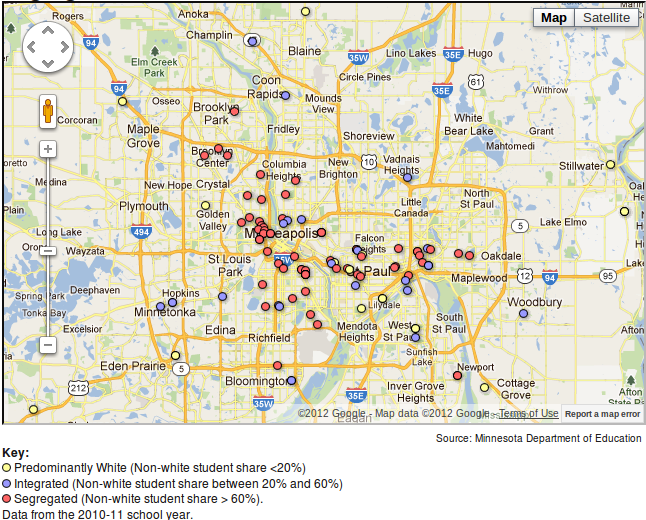 “The high rates of racial and economic segregation matter because research shows that students do worse in segregated school environments than in integrated settings,’’ said Luce, research director at the institute. The report analyzes Minnesota Department of Education data.

The percentage of schools that are integrated is increasing among traditional schools operated by school districts, according to this study.

The study shows “that charter schools are not closing the achievement gap; they may be making it wider by increasing segregation,” stresses Orfield, director at the institute and a longtime proponent of integrated schools.

The full study, which also addresses management problems of charter schools, is here.

Orfield’s last study on charter schools came out in 2008 with similar results.

“Which is better, district or charter, is like saying which gets better gas mileage, the rented car or the leased car,’’ responded Joe Nathan, director of the Center for School Change at Macalester College in St. Paul.

People should have the opportunity to choose among various kinds of schools, he said, adding, “This is the same story, 50th verse from Myron. The truth is more complex.’’

Look to the Star Tribune’s Beating the Odds list for evidence of success, said Nathan. That list features high-poverty schools where students are doing well and many are charter schools and some are schools with students of one race, said Nathan, a long-time supporter of charter schools.

About that list of schools, Orfield said: “These are cherry-picked statistics” rather than academic studies.

Some charter schools have lower-achievement scores, Nathan acknowledges, as do some district schools. Nathan points to high-performance, poster-child charter schools such as Harvest Preparatory and Hiawatha Academy in Minneapolis, as well as Higher Ground Academy in St. Paul. He also said his center has worked with district and charter schools in Cincinnati to effectively close the racial achievement gap there.

“Certainly the information in the report is compelling,’’ Briner says. “We have a vested interest in making sure that every educational opportunity whether online, traditional district school or charter school is delivering a high quality education to students.’’