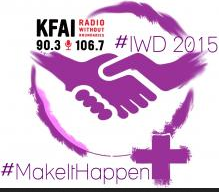 Instead of regularly scheduled programming on KFAI radio today, listeners will hear from a global community of women sharing their stories. This is the 26th year  KFAI has broadcast an entire day of shows produced by, for and about women living here in the Twin Cities.

Planning for International Women’s Day is a process because KFAI does programming mainly by committee. International Women’s day planning has been in the works since November of 2014 with about a dozen or so people involved. KFAI program Fresh Fruit co-host Quinn Villagomez is one of those members. She said they received more than 34 applications this year after sending out requests for programming to women, self-identifying women and youth interested in creating a radio program. This year, a total of 27 programs will broadcast from12 am to 12am. Listeners will hear about a huge range of subjects including working women and breastfeeding, Tibetan women in exile, issues in the East African community, African American women and their representation in the media and Bollywood dancing.

“Basically, it was an open forum for them to talk about whatever was on their mind and whatever was true to their heart,” said Villagomez.

“The diversity in programming speaks to KFAI’s commitment to providing a platform for people who are not represented by traditional media, ” Opoti said during our phone conversation.

Opoti talked about one program in particular: Celebrating 40 years of Hmong American women. The show’s producer Bayo Thao says it’s a reflection of Hmong American women’s achievements and contributions to building community from 40 years in America. The show coincides with the Minnesota Historical Society’s show We are Hmong Minnesota. Bayo has been consulting with MHS and advocated for a Hmong women’s timeline to be included in the exhibit. The show will include voices from different generations of Hmong women, including that of Gao Lee Yang, one of the first Hmong women to come to Minnesota.

“The last forty years represents probably the most progress Hmong women have had in terms of being able to make decisions for themselves and participating in building of the community. Probably more so than any other time in history,” said Thao.

They’re also going to talk about progress that’s been made in areas that continue to challenge the community. One of those issues is domestic violence. Thao said that Hmong women have a long way to go to achieve gender equity.  The show will highlight those challenges, but also celebrate the progress too.

Part of International Women’s Day on KFAI is celebrating women. That’s what Shimmer Show will do. Shimmer is Villagomez’s alter ego. Music by female artists from the 80’s, 90’s and today will be played throughout the show as well as commentary about fashion and popular culture.

“It’s a way to celebrate my life path and what I’ve been through with my self-identity.”