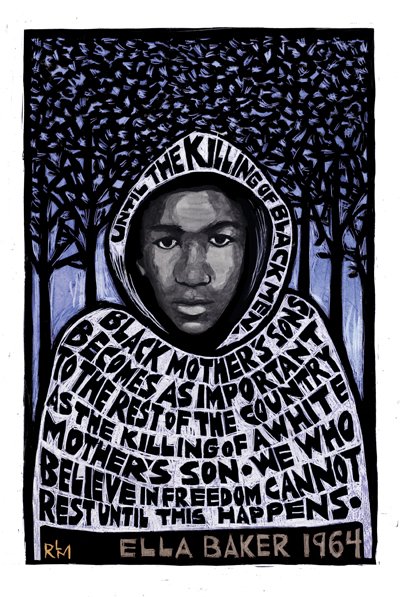 “What do we do now?” While marchers chanted “No justice, no peace,” this question kept coming up in interactions along the route. The question was about more than the verdict. It was about the Supreme Court gutting the voting rights act; state governments undermining the right to organize and women’s reproductive rights; police powers reaching into elementary schools, sweeping up young NY pedestrians and sending paramilitary SWAT teams crashing through doors in residential neighborhoods. It was about corporations with the rights of people and people deprived of them. As the outrages seem to pile up on top of each other, how do we make our actions count? It was a young man we were marching for that day and will continue to hold in our hearts but we were also marching for that larger question of hope and change. That is what I wish to speak to now.

For me it begins with a deep breath. Then I ask myself what I’m missing. This is particularly important for people prone to hopelessness. You see, things don’t feel hopeless because there aren’t options; you just can’t see the options if you feel hopeless. Here are a few observations that come to mind when pondering the question at hand.

1) History moves in a spiral, not in a circle. The racist practices that were in place when Emmett Till was murdered in 1955 are still operative in the time of Trayvon Martin but they play out on a different landscape. Then Jim Crow was in full bloom. Today a coalition of moneyed and fanatical interests – panicked at the prospect of an increasingly brown nation – are trying to bring it back. They are meticulous in their methods but the strategy itself is ill-conceived and will ultimately backfire.

2) The powerful are always fearful. The National Security Agency is collecting troves of information about all of us. The national security machinery has been accumulating power for decades. The rationale is whatever people will fall for. Today it is about “keeping us safe.” Its managers understand what we have not figured out: that we the people have tremendous power. They must watch closely for any signs that we’ve caught on.

4) You will be exposed to much nonsense about the trial and its meaning. You can decide when it is strategic to respond. You do not need to be Trayvon’s defense attorney against those who would prosecute him. You have more important things to do.

5) This country was founded on racial dominance.  There is no avoiding the consequences. A large proportion of white people have no idea as to how it works. Where I live, it is a marker of working class upward mobility to own a cabin on a lake. White politicians describe how their families worked hard for the family home, the good education and the cabin. It is undoubtedly true.  They don’t understand that others worked as hard but were not allowed to collect. They don’t know that until recently the lake associations required a pledge to not sell to blacks; that companies had policies against hiring non-whites; that few colleges would admit people of color and that realtors would jack up prices for dark folk. As white folk singer John Gorka puts it in a remarkable song, “I didn’t know my way was paid.”

People rarely change their minds because someone has argued with them (or yelled at them). They change when a changed atmosphere makes the unthinkable thinkable. White support for civil rights grew when the ferocity of the black southern struggle shook the fence on which they were sitting until it became too uncomfortable to remain there.

6) Your opponents will tell you their vulnerabilities. You may have noticed that our country has two systems of mass incarceration: one for the dark and poor and one specifically for immigrants. Most people contained in them have not actually harmed anyone. This suggests that these populations are reservoirs of power that could threaten the status quo. These systems are not broken. They are effective. They need to be broken.

7) Do not fear messiness. The issues we face are complex. We don’t need to be afraid of them. How is it that a Latino man in Florida takes on the mantle of the white vigilante cause in a time of resurgent Jim Crow? What led the white and Latina women on the jury to sympathize more with Zimmerman’s fear than with Martin’s? What can we learn about the complexities of identity, ambition and solidarity? When our neat assumptions are defeated by the world we must kiss them goodbye and ask big questions. We can do this.

8) Change is not steady. It lurches from one tipping point to the next. When enough water saturates a slope it produces a landslide. The Voting Rights Act has been gutted. States are moving to revive voter ID laws and proceed with the racialized election practices we’ve seen in recent years involving the locations of polling places, availability of ballots, limits on voting days and misinformation on all of the above. This moves us toward a tipping point.

9) Flipping the story. If they succeed in substantial disenfranchisement we can flip the story. We can declare elections under such conditions invalid. That means that officials so elected are not legitimate. Laws “passed” by fraudulent bodies are not binding. Popular councils can pass their own, non-discriminatory, measures or organize referenda and establish them as the people’s will. Political struggle is about consciousness and legitimacy. If they push discrimination as far as they hope to they will be handing us pure movement gold. It will come down to it.

9) The dots are connected.  The central fact of our time is that we live with austerity at the bottom and gluttony at the top. This can only work if we are fighting each other for crumbs of opportunity and shreds of dignity. If we are to create a world in which future Trayvons can live without fear, we will need to share the bounty of the world and take good care of it.

Remember: hopelessness is an illusion. Intention plus courage plus clarity is the solution.