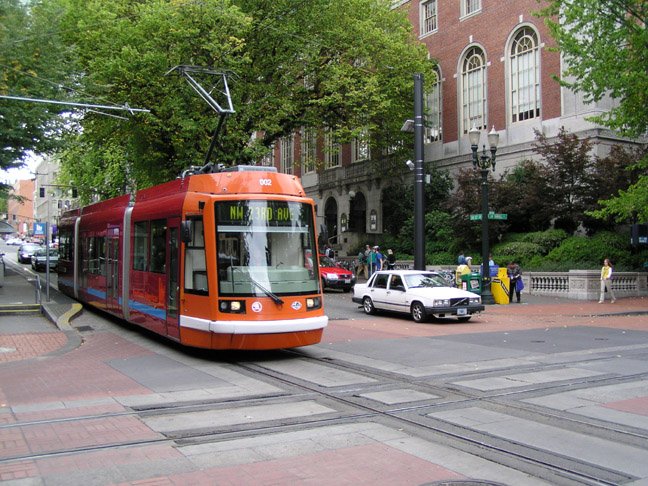 A modern streetcar in Portland, Oregon.

Of the 200 Metro Transit bus routes, 4 routes that run on or cross West Broadway are among the 12 most popular. One of those, Route 14, travels along West Broadway between Robbinsdale and downtown Minneapolis and has approximately 6,300 weekday riders. Investments in transit infrastructure to improve travel speed, increase reliability, enhance the ride and create faster connections will benefit the thousands that already rely on transit, and make transit a more viable mode of transportation for additional residents.

Among many benefits, a healthy transit system saves riders money- the AAA estimates that owning a car costs an average of $9,000 per year, whereas a year’s worth of unlimited Metro Transit passes costs only $708-$1,020 per person.

Because of high existing ridership, the potential to increase livability and stimulate business growth, West Broadway is being considered for a streetcar line or enhanced bus service by the Metropolitan Council/Metro Transit. The upcoming West Broadway Transit Alternatives Analysis study is the result of a funding partnership between the Metropolitan Council, the City of Minneapolis and Hennepin County.

The 12-month study, slated to begin before the end of 2014, will also look at the feasibility of connecting the streetcar line to the future Bottineau light rail line or other future streetcar lines.

Neither the streetcar or bus enhancements would replace existing traditional bus service along West Broadway; any new transit system is intended to improve the transportation experience through the corridor.

What is a Streetcar? Bus Rapid Transit?

A modern streetcar system is similar in design and functionality to Light Rail Transit (LRT), but is substantially less expensive, less disruptive and time-consuming to install, and intended to provide a more localized commute, between 2-3 miles. Modern streetcars are typically a single car between 70 and 80 feet long, and fit up to 120 people. The tracks of the system run in traffic lanes shared with cars.

A Bus Rapid Transit Line (BRT) shares similarities with streetcar, but uses articulated buses that are about 60 feet long. The line would run in existing roadways, but is different from traditional bus lines in that it features increased service frequency and enhanced boarding stations.

Both streetcar and BRT station design are similar to LRT stations; they are covered and heated, have security cameras, riders pay for tickets before boarding, and feature real-time information about schedules. To minimize trip time, limited stops are spaced every one-quarter to one-half mile.

The study also will look at the economic development potential of a major transit investment for West Broadway. Streetcar and BRT systems in other parts of the United States have demonstrated an ability to encourage new development.

In Pittsburgh, PA, the city saw $302 million in redevelopment and new development near Pittsburgh’s East Busway BRT Line, 80% of that clustered near stations. In Portland, OR, one study found that streetcars helped encourage $778 million in local development against a project cost of $95 million. In both of these examples, investment in transit served as an anchor to encouraging growth.

Get Involved in the Planning Process

Metro Transit and its partners recognize the importance of prioritizing the needs and wants of the community that any transit investments will serve. Half of the cost of the study will support outreach and engagement.

The West Broadway Business and Area Coalition has a newly established Transit Committee made up of representatives from community groups, nonprofits, businesses, and residents working to gather input on transit projects; the group is looking at new and unique ways to maximize public input. Anyone with questions, concerns, ideas, or an interest in keeping up-to-date should visit us on the web at www.westbroadway.org/transit and follow the West Broadway Business and Area Coalition on Facebook.

A modern streetcar in Portland, Oregon.