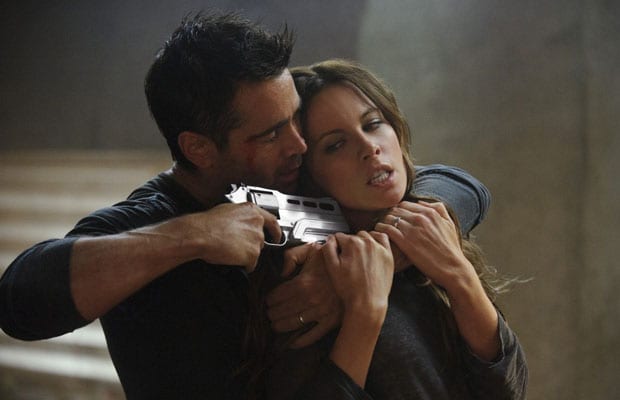 What’s real and what’s a figment of a stressed imagination get muddled in director Len Wiseman’s Total Recall, a remake of the 1990 sci-fi classic of the same name that starred Arnold Schwarzenegger in the lead role. Wiseman’s take on the already told tale is different enough from its source material to justify a remake, even if the film’s main concern is to startle viewers with hulking computer generated images and relentless chase sequences.

Douglas Quaid (Colin Farrell) is not happy with his life. Late 21st century Earth isn’t all he hoped it would be. Much of the planet’s land has been ravaged by chemical warfare, leaving only two colonies that support life: the United Federation of Britain (UFB) and The Colony, located in Australia. The two landscapes are connected by a ride called “The Fall,” which is basically a large elevator that cuts through the center of the Earth (core and all) and juts out in both colonies; now that’s a shortcut! Everyone doesn’t appreciate The Fall, however. Many people from The Colony are sucked up everyday to work for the UFB on their turf. Quaid is part of this lot, and he’s pretty burnt out from busting his butt on the assembly line (making not cars, but military robots).

On the positive side, Quaid has a very hot wife named Lori (Kate Beckinsale), who not only teems with sexuality, but also has an ear for all of Quaid’s problems.

One day, disgruntled enough with working mindlessly for the Man to do something about it, Quaid visits Rekall—a place that offers to implant false fantasies in your brain to make you believe you actually lived them.

Things go bad at Rekall. Brain chips are fried, guns are fired, and Quaid runs away into the rainy night. He finds that his once boring life is not what it seems. Lori, no longer a bedside companion, now wants to kill Quaid, and she whips out some badass karate moves to try and do the trick.

Soon another woman appears in Quaid’s life: the hovercraft-driving Melina (Jessica Biel). She works for the Resistance, a faction of The Colony that fights against the oppressive leader of the UHB, the sinister Cohaagen (Bryan Cranston).

Whew, that’s a twisty plot synopsis. But twistiness and deception are what lie at the core of Total Recall’s plot. Don’t be fooled, though. It may sound like a complicated film to follow, but Wiseman opts for muscular action over thought-provoking mind games. Once the foundation of Quaid’s predicament is set (at about the half-hour mark), the character development and much of the dialogue is replaced by sweaty, explosive chase scenes and head-hammering fistfights. Good thing those are executed well.

Farrell plays Quaid as a believable blue-collar everyday man who stumbles into situations where he has no idea what’s going on, but does know that he’s in way over his head. His reactions to the perception-shattering revelations he’s vulnerable to since leaving Rekall are exactly how I think a person in real life would act like if they were being put through the same situation: wide eyes, lots of blinking, and plenty of double takes. Farrell also gets absolutely pummeled in this film. He dominates some action scenes with gun shooting finesse and quick hand-to-hand fighting reflexes, but for a good long while Wiseman and his writers Kurt Wimmer and Mark Bomback put Quaid through a little physical Hell at the hands of Kate Beckinsale’s Lori.

Speaking of Ms. Beckinsale, the native Brit is the best part of Total Recall. She’s got plenty of experience in the kick-ass female action star department, having been the leather-clad vampire slayer in three Underworld films. Here she gets an opportunity to snarl at the camera in the villainess role, and boy is she stunning! Her cocky attitude, combined with a frantic, obsessive fighting style make all of her scenes especially entertaining and worth the price of admission.

Now, I’ve heard at least one critic gripe about Beckinsale getting the role of Lori only because she’s married to director Len Wiseman. This type of casting isn’t new; it has happened with other actress-director couples in Hollywood, such as Milla Jovovich and Paul W.S. Anderson with the Resident Evil films and The Three Musketeers; and Sheri Moon Zombie and Rob Zombie with House of 1000 Corpses, the Halloween remakes, and other films, respectively. I don’t see a problem with family hooking up family with acting gigs. It’s networking, and most of the time it works. In Beckinsale’s case with Total Recall, I think Wiseman could not have picked a better woman to play the crafty Lori. Sharon Stone, who played the same character in the 1990 film, should be proud of Beckinsale for bringing the right amount of venom to the role.

The other major female co-star, Biel, is rather disappointing as Melina. She’s supposed to portray a tough-as-nails revolutionary soldier. Instead of being all gritty and steely-eyed, Biel just looks uncomfortable when shooting a gun or flying a hovercraft. When she’s trying to be angry, Biel looks like she had something bad for lunch and her stomach is paying the price. I think Biel has acting skills, but they’re not sufficient tools for the heavy-duty engines of an action movie.

Total Recall is great popcorn entertainment. It takes itself a little too seriously at times. The screenplay has parts that are thin enough to see through, thanks to silly dialogue and drawn-out chase scenes. Farrell, Beckinsale, and some well-crafted fight scenes will make it worth your time if you’re a real action hound, though. Those seeking thought-provoking sci-fi masterpieces: look elsewhere.