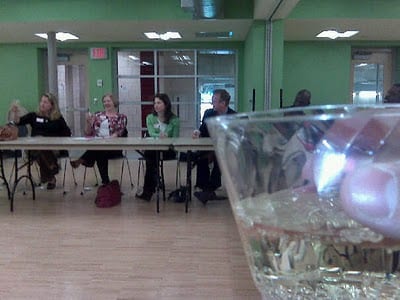 Wednesday morning marked a significant gathering of partners along West Broadway. Much of the work, spurred by Ackerberg Group offshoot Catalyst Community Partners, has already been profiled here on Johnny Northside.

However, one thing many partners realized was that there are many people and institutions working on revitalizing West Broadway, but we don’t meet and coordinate our efforts often enough. CM Don Samuels chaired this get-together, and we commemorated it with a toast to the many success stories of West Broadway. We didn’t use REAL stuff, like we’ve done in the EcoVillage or at Harvest Days, but the toast was special nonetheless.

Among the things we celebrated were…

…Minneapolis Public Schools’ decision to move their headquarters to NoMi, the ongoing renovation of the Delisi’s building at Penn and Broadway, new businesses like Good Sports Bar & Grill, and the phenomenal work of Catalyst – including the building at 1200 West Broadway.

On top of Samuels’ presence and that of an aide (we’ll miss you Jose!), representatives from CM Johnson’s office, CPED, the Pohlad Foundation, Catalyst, Hennepin County, the West Broadway Business Coalition, and many other partners were in attendance. And even though we met on a weekday morning, several area residents came as well.

One other item worthy of note: this blog has already documented the success rate of Catalyst hiring local and minority workers on their projects. But Mike Christenson of CPED noted that on the 300 residential rehabs done by city development partners such as GMHC, PPL, PRG, or Urban Homeworks, 70% of the contractors used have been Northside contractors. Our partners have been intentional about doing their work in a way that maximizes benefits for our community.

But this wasn’t just a self-congratulatory meeting. We also wanted to discuss barriers and roadblocks so that we can begin to work around them. One issue that thankfully came up was… 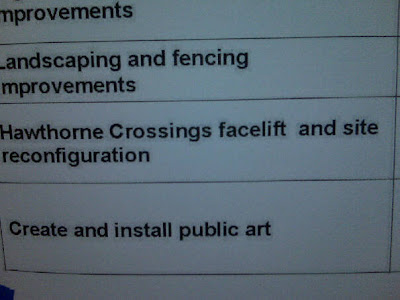 …Hawthorne Crossings. Presumably they meant Hawthorn (sic) Crossings, and hopefully an influx of financial assistance will correct the spelling. But that’s not all we plan on doing. All signs point to some serious measures to address the safety issues along that block. Given how far we’ve come and how quickly, it’s truly encouraging to think of what can happen in this area as well.

One of the residents also brought up the need for transportation improvements along the corridor. Hopefully, that will include a light rail stop at Penn and Broadway, but what can be done until then? This wasn’t QUITE along the lines of the topics we had gathered to discuss, but public transit in NoMi could stand to be improved and her point shouldn’t be lost in the shuffle.

All in all though, I left the meeting thinking of what Don said during his campaign, that in four years, we won’t BELIEVE the kinds of amazing changes that will have come to West Broadway! A HUGE thank you goes out to all our partners who are working to make this happen!