Close your eyes and take a mental walk down University Avenue from Highway 280 east to Snelling. How many examples of public art can you name?

Did you list Lisa Elias’s sculptural bus bench “Forged Roots,” which climbs its way up the Raymond Avenue side of the Security Building, 2395 University Ave. What about Benjamin Jose’s piece “Industrial Celluloid” at the top of 2375 University Ave.?

Marcia McEachron’s “Out of the woods” in front of Episcopal Homes at Fairview Avenue? “Red Alert” by Al Wadzinski with its salvaged-Mississippi-River-garbage-turned-beak squawking at the sky near Goodwill Easter Seals at Fairview Avenue

Have you noticed any of these pieces? If you have, can you imagine the streetscape without them? Do you find value in public art?

Six students from Avalon School spent hours asking that last question this winter as they worked on a promotional film project for Forecast Public Art, a St. Paul nonprofit that connects artists with opportunities to create public pieces. The project targeted pieces of public art in Minneapolis and St. Paul and was guided by Deacon Warner, youth program coordinator at IFP Media Arts, another St. Paul nonprofit arts organization.

This story isn’t really about public art. It’s a tale of how three organizations—two nonprofit arts groups and a project-based charter school, all within four blocks of each other in the Raymond-University area of St. Anthony Park—tapped into each other to help fulfill their three missions: to strengthen and advance the field of public art, to advance a vibrant and diverse community of independent film and media artists, and to inspire students’ active learning and engaged citizenship.

“Hopefully, it’s the start of a great relationship with our new neighbor,” said Warner, referring to the IFP alliance with Avalon, an 11-year-old public charter school that relocated this summer from 1745 University Ave. to a new building at 700 Glendale St., two blocks southwest of the intersection of University and Raymond. 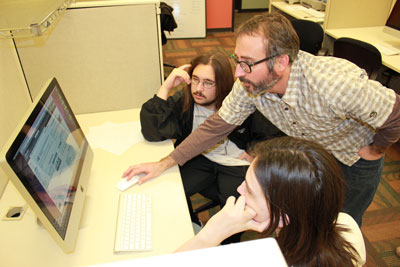 IFP Media Arts is a 25-year-old film and photography group that has been at the corner of Pelham and University Avenue since 2005. It began as a film group but merged with the Media Artist Resource Center in 2002 and now includes resources for both filmmakers and photographers. IFP offers classes, as well as gallery space, darkrooms, a computer lab and youth program-ming that includes summer documentary filmmaking for older teens. Warner also conducts residencies in the schools.

“It came out of the connectedness of art organizations in this area,” she said. “My executive director [Jack Becker] met Deacon at an event and put us in touch. We had coffee and decided it would be a great way to connect Forecast to the community and build a relationship with IFP by reaching out to a new school.”

Warner was already scheduled to do a residency at Avalon. When he presented the project to the students there, “they jumped at it,” he said.After brainstorming, the students decided to seek the public’s opinion on public art by finding out if people on the street were aware of specific pieces in their communities. First, they interviewed the artists about their work and then went to the art pieces, wrapped them in plastic tarps and conducted street interviews with passersby. They asked if the interviewee knew what was under the wrapping and then launched a conversation about the value of public art.

Out of more than a dozen interviews, only one person gave a negative response, said Avalon student Alex Kaardal, 17.

“A lot of people were really passionate about it. There are people who do notice and appreciate what [public art] does,” Kaardal said.

Many of the interviewees didn’t know what was under the tarps, but those who did had strong positive opinions about the role of public art, said Sage Osterberg, 16.

“The guy who didn’t think highly of public art said that it cost so much money and that it wouldn’t make a difference if it were gone,” said Dio Poletes, 17. “I think public art is necessary,” Kaardal said, but he also understood the man’s point of view. “He [presented] a good side to [the question] with the debt crunch and the amount of money it takes.”

Warner said the project was student-directed. “I provided the framework and technical instruction for making the film, but the creative ideas and focus of the film came from the students.”

When finished, the film will be submitted to the .EDU Film Fest, which will screen at the St. Anthony Main Theater in Minneapolis on May 18, and it will be posted on the IFP and Forecast websites, ifpmn.org and forecastpublicart.org. It will also be submitted to the local cable access channels MTN and SPPN for local broadcast.