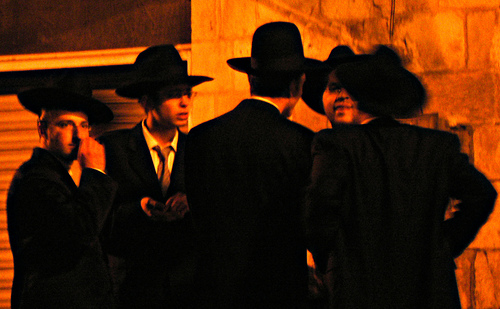 What are we to make of the recent flood of stories on religious extremism coming from Israel?

Friction between religious and secular Israelis is not new, but recent events make one wonder if the country’s democratic foundation is being eroded by ultra-religious zealots, intent on forcing their brand of Judaism on everyone else. The incident that sparked much reportage and outrage occurred when an 8-year-old girl was harassed and spat on by haredi men as she walked to her modern Orthodox girls school in Beit Shemesh, a Jerusalem suburb.

Apparently, her modest attire did not meet the haredi mens’ stringent standards. Prime Minister Netanyahu, Kadima party leader Tzipi Livni, President Shimon Peres, and Moshe Abutbul, the haredi mayor of Beit Shemesh condemned the haredi extremism. Groups in the U.S. were quick to respond too, including a statement by the haredi Orthodox umbrella body, Agudath Israel of America.

A demonstration in Beit Shemesh against haredi extremism was organized, with several thousand secular and modern Orthodox Israelis attending. Among the messages conveyed on the protestors signs: “Silent Majority- Wake up!” A counter-demonstration of a few hundred Jerusalem haredi soon followed. Believing themselves to be the object of public incitement and hatred reminiscent of the Holocaust, haredi children were paraded about wearing yellow stars and striped uniforms. These shocking images unleashed a fresh wave of denunciations from mainstream Israeli leaders.

Most agree that the actions of some haredi in Beit Shemesh, and the appalling use of Holocaust imagery, are the work of a fanatical fringe, which don’t represent the larger haredi community. Yet the lack of unequivocal condemnation by the Israeli haredim reflects their ambivalence when it comes to religious zealotry, as outlined in this article by Uriel Heilman:

“The question isn’t how many haredim support haredi violence and how many do not,” said sociologist Menachem Friedman, an expert on haredi life and professor emeritus at Bar-Ilan University. “In all the conflicts involving haredi violence in Israel, from the British Mandate period until today, violent haredim were always a small minority, and I believe that the vast majority feel uncomfortable about them.

“The problem is that most haredim allow the extremists to act and do not stop them,” Friedman continued. “Some, perhaps a small segment, really do support the violence; some, perhaps a larger segment, do not support the violence but understand the extremists, believing that actions like these, even if they are not pretty, at the end of the day are a true expression of religious sentiments,” he said. “And the majority perhaps opposes the violence and knows that ultimately it’s bad for Judaism but doesn’t have the courage to go out and oppose it publicly.”

The specter of Jewish extremists using religion to justify appalling behavior will undoubtedly cause some, Jews and non-Jews, to smile smugly and say “You see? Jews are radicals too.” But such a conclusion misses the most important point. Of course we have extremists. Every group- Jews included- has its radical element.

The question isn’t whether a group has radicals, but what the non-radical majority intend to do about it.

First and foremost, there are laws in Israel that protect people from harassment, and they must be vigorously enforced. Are they? Some say that law enforcement’s response has been weak, that placating the governing coalition’s religious parties has a greater priority.

Second, Haredi scholars, rabbis and leaders who oppose the actions of this minority have to back up words with deeds. For starters, they should accompany schoolgirls like the child in Beit Shemesh, and stare down the zealots that would harass them. They should use their influence to re-educate those Jews who have taken a beautiful heritage and twisted it into something that is hilul hashem, a desecration of God’s name, shaming us all.

Those outside the Orthodox world must educate themselves too – the Orthodox world is not a monolith. It includes the Modern Orthodox, National Religious, as well as haredi, and even within the haredi community there are variations. Making sweeping generalizations about “the religious” solves nothing.The danger of secular and haredi Jews talking – no, shouting – past each other is thoughtfully addressed in this piece by Natan Slifkin, himself a resident of Beit Shemesh:

“The widespread talk against religious Jews is no less offensive than the curses heaped by haredi extremists upon others. This also has the effect of encouraging the wider haredi world to adopt a siege mentality and prevents them from acknowledging any wrongdoing in their own camp – which in turn lends credence to the secular charge that haredim are indeed all of the same mindset. Thus, the ultra- secular and the ultra-Orthodox are locked into a vicious cycle which brings out the worst in each.”

The story from Beit Shemesh is just one of several that raise concerns about where Israel’s open, pluralistic, democratic society is heading. The always-thoughtful, deeply Zionist Dr. Daniel Gordis recounts bitterly the story of Tania Rosenblit, a young woman who refused to move to the back of the bus when instructed to do so by haredi passengers on a bus from Ashdod to Jerusalem. Add to this the brouhaha over female soldiers singing at army ceremonies, which offends the religious beliefs of some soldiers. Gordis’ disgust leads him to this disturbing conclusion:

So far, it seems we are so desperately afraid of our external enemies that we’ll support at all costs a government that just watches as the country rots from within.

Glick notes that large numbers of ultra-Orthodox women have received vocational training in high tech and other martketable fields, and that more and more of their husbands are following them into the work force, lifting their families out of poverty. While decrying the bullying behavior of ultra-Orthodox extremists and calling upon law enforcement to fulfill its mission, she rejects the notion of an Israel that is unraveling.

Glick believes that there is far more that unites us than divides us.”If we focus on this, there is no force either within or without our society that can defeat us.”

Is she simply telling us what we want to hear? Perhaps.

Is she right? I certainly hope so.

Because ultimately, it will take the cooperation of all segments of Israeli society to deal with the radicalism of our own people. Those of us who love Israel should expect no less.

This is a guest post by Sally Abrams.  Sally chairs the Speakers Bureau of the Jewish Community Relations Council.  She has presented the program “Israel and the Middle East: the Challenge of Peace” at hundreds of churches, schools and civic groups throughout the Twin Cities and beyond.