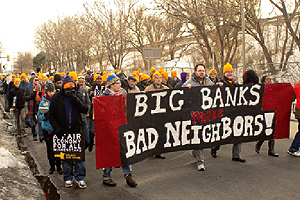 A march of about 200 people, organized by Occupy Homes MN, Neighborhoods Organizing for Change and allies from faith and labor communities, began at the home of Gayle Lindsey, fighting her foreclosure with Occupy Homes and her neighbors in the Foreclosure and Eviction Free Zone in the Central Neighborhood. It proceeded to Jessica English’s reclaimed vacant home, which had turned into a drug house after being abandoned by Wells Fargo.

Jessica, a single mom of four experiencing homelessness, has rehabilitated the house with Occupy Homes as a place to raise her children.

“As a homeless mom, it’s sickening to see all the vacant homes Wells Fargo owns that attract crime in Minneapolis,” Jessica told the crowd. “Wells Fargo abandoned this home, letting it turn into a drug house that brought blight on the community.

Now the community has come together to welcome my family home and demand that Wells Fargo turn over vacant homes to community control for affordable housing. We are restoring what Wells Fargo destroyed.”

From there, the crowd of 200 took the streets and marched through the gates of Wells Fargo Home Mortgage, where they were joined by a heavy police presence.

They brought 20 bags of trash cleaned up from neglected vacant homes, demanding Wells Fargo clean up their own mess. They rallied in front of the building where Patrick Russell, an employee at the Wells Fargo Home Mortgage Center, came down to join the crowd and to speak out against his employer. “I know people who’ve been stuck in prisons that Wells Fargo owns, seen communities wracked by poverty, homes foreclosed on, to stand vacant like weeping sores,” said Patrick. “It is embarrassing to see that Wells Fargo as an institution has been so unwilling to work to rebuild our communities, but if that’s the case, maybe it’s time for the individuals within Wells Fargo to step forward.”

The crowd then continued to the 26th Street bridge over I-35W, where internationally renowned hip-hop artist Brother Ali performed from the back of a pickup truck. After about 20 minutes, police moved in to ask the crowd to disperse. Thirteen sat in the middle of the road linking arms in an act of civil disobedience and were arrested.

“Today was living proof that the housing justice movement is alive and well. It’s inspiring to see people from so many communities—Somali families trying to send money home, security guards on strike, college students, neighbors reclaiming their neighborhood from crime and blight, even Wells Fargo employees—all coming together to stand for a change to Wells Fargo’s practices,” said Anthony Newby, executive director of Neighborhoods Organizing for Change (NOC).

“Minnesota deserves better, and it’s time Wells Fargo stepped up to the challenge.”

The City of Minneapolis could play a significant role in ending the foreclosure crisis. In California, cities like Salinas are considering using their powers of Eminent Domain to purchase homes in foreclosure and then sell them back to the homeowners.

Many homes are currently underwater—the homeowners owe more on their mortgages than the properties are currently worth. Mortgages to minorities and people living in poor neighborhoods have many times been rigged in favor of the banks with high closing costs and escalating interest rates.

According to Janell Ross in Huffington Post Business: “Wells Fargo & Co., the nation’s largest mortgage lender, is facing the second of at least two federal probes into how it treats minority borrowers and the properties it owns in minority neighborhoods. Department of Housing and Urban Development officials confirmed this week that the agency will investigate allegations lodged against the bank Tuesday by the National Fair Housing Alliance. The alliance complaint accused Wells Fargo of working to maintain and market bank-owned foreclosed properties in predominantly white communities far more aggressively than it does in mostly black and Latino neighborhoods.

“The Justice Department is already probing the bank’s lending activities in the period before the housing bubble burst in 2007. Wells Fargo has been accused of steering black borrowers into higher-cost and higher-risk subprime loans that made foreclosure more likely, Bloomberg News reported in July.

“That month, the Federal Reserve also forced Wells Fargo to pay an $85 million fine in connection with the bank’s practice of steering buyers who could have qualified for better loans into subprime mortgages and falsifying information on key documents.”

Clearly, Wells Fargo is not going to work with the community to stop the foreclosures, boarded up houses and devastating deterioration of our neighborhoods. This is the time for City Council members and the mayor to step forward and exercise leadership in using the tools that the city has to protect our communities. The city has the power of eminent domain to use when it is in the public interest that the city purchase a property. We do that for roads, schools, even shopping centers. Why shouldn’t we do that when homeowners have been abused by the banking practices of Wells Fargo? There could be no better place to start than with the homes of Gayle Lindsey and Jessica English.