Some years Thanksgiving, given its very name, is a tough holiday to get through, and this year, given the terrible economy, could be one of those. 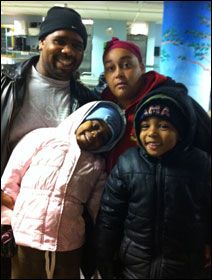 Yet there are people like Korey Bell, an Ohio transplant who came to Minnesota in search of a better life. Life’s a lot better this Thanksgiving than last, he says. “I’m working now.”

But even with the new job and some help from government aid and non-profit programs, Bell and his girlfriend still struggle to make ends meet as they try to climb out of poverty. So Cub Foods’ gift of the makings for a traditional Thanksgiving dinner – from a 15-pound turkey to mashed potatoes in a box and all the trimmings — brought them back to People Serving People, the downtown Minneapolis family shelter they’d lived in for almost four months earlier this year.

This family, like 150 others at Monday’s gathering, had worked their way out of homelessness due to a continuum of programs including People Serving People, Simpson Housing Services, Project Pride for Living and St. Stephen’s Human Services. And here the corporate world was playing a part as well. In all, Cub gave away 2,000 Thanksgiving meals.

Homeless and jobless last year, Bell, his girlfriend Athena McKissick and their four children now have a place of their own in North Minneapolis. He’s working night shifts as a machine operator at a factory and she has just received certification as a home health aide and expects to be employed soon.

“Life is actually a lot better,” Bell, 33, tells me. He makes about $1,100 a month. They receive child support and Supplemental Nutrition Assistance Program funds and got housing financial help from St. Stephen’s for four months.

I met others on Monday who were hopeful at People Serving People.

Jacqueline Morgan, who fell homeless when she lost her customer-service job with a pharmacy chain, just moved out of the shelter after a four-year stay.

While there she learned self-confidence and how to be her own advocate, she says, and took advantage of classes the shelter offered, including job-search training. Now, with the help of various social-service programs, she lives with her two daughters in a town home in Brooklyn Center while looking for a job.

Montesia Smith, 29, sought me out to tell her story. Only last week she and her fiancé moved out of People Serving People to their own place in south Minneapolis. He recently was hired by Wal-Mart and soon she will start a job as a personal care assistant.

Smith praises Minnesota for its services for the homeless. In Kansas City, Kan., where she’s from, shelters don’t offer programs like job-search services and training that People Serving People does, she says.

Besides those struggling with poverty, Monday’s gathering drew representatives from the city of Minneapolis, the state and non-profits who were there to laud local efforts to house the poor.

Bell, Morgan and Smith say those efforts changed their lives.

There’s a lot more work to be done, but there was optimism at the event, including in these words from Julie Manworren:

“We really can end homelessness,” said the executive director of Simpson Housing.