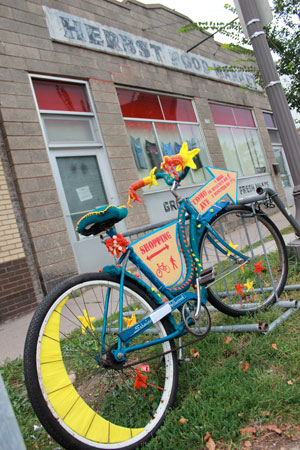 Be on the lookout for two-wheeled creativity throughout St. Anthony Park from now until the first snowfall.

Artist Carrie Christensen’s Wayfinding Art Bike Project was installed this month and includes 11 bicycles, including the Yarn-Bomb Bike (at top), made by Amy Sparks, executive director of the St. Anthony Park Community Council. That bike is at 777 Raymond Ave.

The Peace Bike, made by Christensen, is a vintage 1930s bike, a rare find, according to Christensen, as bikes from that era were often melted down for ammunition during World War II.

She fastened lotus flowers to the bike and painted it bubblegum pink “to reflect the idea of peace.” After all, she says, “Who doesn’t feel peaceful with bubblegum pink in their environment?” You can find the Peace Bike (below) at South St. Anthony Recreation Center, 890 Cromwell Ave. 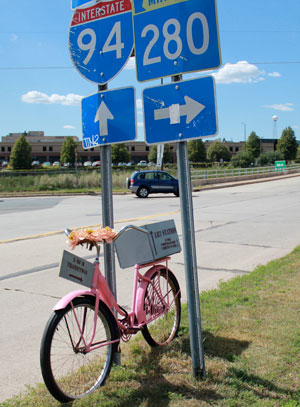 The Garden Bike, shown below, is at Milton Square, at the corner of Carter and Como avenues. 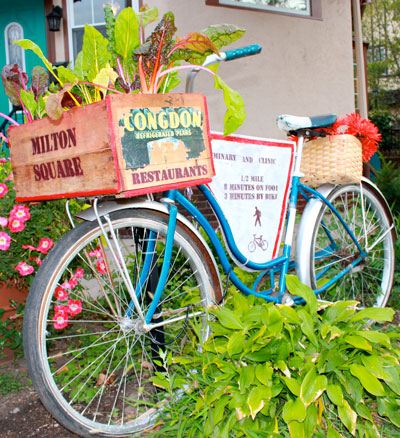 You can find a map to all the Wayfinding Art Bikes here.

The St. Anthony Park Community Council and Irrigate Arts are collaborating with local artist Christensen to develop a project to encourage non-motorized transit in and around the neighborhood.

The decorated bikes include distance and directional signs to venues throughout the neighborhood.

Christensen, who has a degree in landscape architecture and works in the urban planning field, says she often uses art in her work.

The bikes will be on display until the first snowfall, she said.

CORRECTION 9/12/2012: Christensen, who has a degree in landscape architecture and works in the urban planning field, says she often uses art in her work.