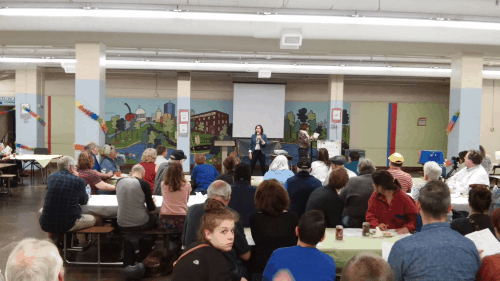 [This is what a neighborhood annual meeting/election looks like. Correction: This article was written by John Edwards for streets.mn. Apologies for the incorrect byline. We are working with new site software.]

Aside from a few highly restrictive neighborhood organizations, becoming a candidate for leadership in most Minneapolis neighborhoods couldn’t be easier (as my own biggest fan, I recently had the pleasure of nominating myself). Voting, however, is unnecessarily burdensome.

In Lowry Hill East, which has a fairly typical process, the election happens around 8 p.m. Nominations are followed by speeches. Then ballots are filled and submitted over the next few minutes. If you can’t be present during those few minutes on that particular day, for whatever reason, you don’t get to vote. And don’t forget your ID, because you’ll be asked for it.

This is a recipe for low turnout. This kind of process creates barriers for people with limited time or hectic schedules: parents with young children; those who work outside a traditional nine-to-five window; or people who, after a long winter, are desperate to spend a pleasant evening at a baseball game (this last one cost me a whole lotta votes).

Rather than develop my own solution for this problem, I found a template: the Linden Hills Neighborhood Council (LHiNC) bylaws (see section 5). Their absentee voting process provides for much more voting (much, much more). To allow for this, candidates are nominated at least seven days before the annual meeting. Making things more convenient, nominations can be submitted by email and ballots can be printed at home.

LHiNC gives residents five days of absentee voting. That’s 120 hours of voting in Linden Hills, compared to mere minutes of voting in my (again, very typical) neighborhood association. They have also dispensed with a voter-ID requirement, opting instead to require voters to put their name and address on their ballot.

High-renter and/or high-minority neighborhoods are the most likely to have very restrictive electoral procedures. This is one of the things I found when I looked at the bylaws of 70 Minneapolis neighborhood associations. And in the case of Linden Hills, we have a neighborhood with a large majority of white (85%) homeowners (67%) making voting as easy as possible for their residents. This is not a coincidence.

Getting people to participate in their neighborhood association is hard enough, even when targeting those already highly engaged and interested in local issues. I recently spent quite a bit of time trying to convince friends, friends of friends, and friends with babies, to give up hours of their lives to put me on the Board of an organization they barely knew existed. It’s a lot to ask. I feel guilty/grateful for their help.

There’s no good reason your neighborhood association’s electoral process should be exponentially harder than voting for Mayor or President. At a time when Minneapolis’ unrepresentative neighborhood groups are making headlines, we should be eager to remove unnecessary barriers.