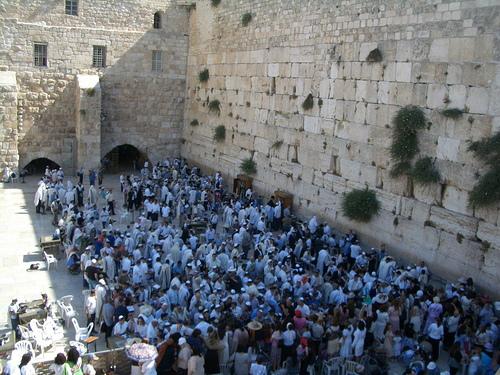 Earlier this year, a friend and I were returning to Jerusalem from Tel Aviv. It being summer and us coming from the beach, my friend was wearing a long dress that covered everything expect her shoulders. As we were walking out of the central bus station to catch a local bus home, a woman approaches my friend and says to her:

“You should really consider covering yourself up. It’s embarrassing.”

This incident is mild compared to the recent events that have put Israel once again in the international spotlight. The story of Naama Morgolese, an 8-year-old schoolgirl from Beit Shemesh, has been told around the world. She has been harassed by ultra-Orthodox extremists every morning on her way to school for what they call “immodesty.”

And this isn’t the first example of this kind of behavior that has been in the news.

There have been issues over male-female bus segregation in religious neighborhoods in Jerusalem. A couple of weeks ago, religious settlers attacked an army base in the West Bank.

Gradually, Israel is finding itself in the middle of a religious war.

This war isn’t new, but more and more it is becoming deadly to Israel’s current state of existence.

While Israel was created as a Jewish homeland, its real beginning is rooted in secularism. The first settlers and kibbutz-nicks were socialists, wanting a place for Jews, but also just wanting a place to work and live together in peace.

And this religious war that is becoming more apparent every day, is threatening those very roots.

If Israel is like a body, these people are a cancer, fighting their own kind until one day they achieve their objective and overcome the host. And this kind of internal threat is the most dangerous. Hezbollah and Hamas are also planning Israel’s demise, yet these enemies are clear, “politically correct” to fight, and Israel can effectively defend itself militarily against these bodies.

But when your own citizens are trying to bring you down, what do you do?

When ideology becomes violent and threatening, who have we become? The point is, we already have enough enemies, and we don’t need anymore.

I wrote in an earlier post about our need for the Orthodox community in Israel, and I stand by that. But this ultra-Orthodox terror is not what I was referring to and the idea that one sect is better than the other is the opposite of what I was conveying, yet it seems to be the platform on which these people are tearing Israel apart.

Naama Margolese is in fact Orthodox herself, modern orthodox. And I think it can be learned from her that no matter your observance level, sect, or upbringing, we as a people have to stick together, not turn against each other.

Israel, and Judaism, are built on mutual respect and tolerance for everyone, and they can only survive on that as well.

While I have been living here, in Israel, I have become more aware of the way I dress and act in public. I am more likely to choose pants over shorts, and maybe opt for a cardigan to cover up my tank top. Yes, I don’t want to offend anyone, and maybe that’s just my Minnesota nice kicking in, but that is also the culture here. It is an attempt to be considerate of others and their comfort level as well.

But while I make concessions for others, the actions must be mutual. This is called compromise.

And how can we ask other countries to compromise with us on big political issues, such as borders and water and citizens, when we can’t even compromise with ourselves over whether a woman should be allowed to wear pants?

There is no preventative agent or vaccine for cancer, but unlike cancer, the terror these people inflict on others everyday can be stopped. It is time for Israel to stop trying to appease everyone. While politicians have condemned this behavior, it is time that actions truly speak louder than words. And not only actions against these people, but actions in uniting and strengthening the rest of religious and secular Israel, as well as Jews all over the world.

There is a story of a man coming before Hillel, a renowned Jewish scholar, and asking Hillel to teach him the whole Torah while standing on one foot. Hillel replied, “What is hateful to you, do not do to your neighbor; that is the whole Torah, the rest is just commentary. Now go and learn it.”

It seems these ultra-Orthodox extremists could really stand to brush up on their Torah.

This is a guest post by Leora Goldblatt, a junior at University of Wisconsin – Madison studying Communications (rhetoric) and Middle Eastern Studies. She is originally from Minnetonka, Minnesota but is currently studying abroad for the year in Jerusalem at Hebrew University.  Follow her online on her “Hi from the Holyland” blog.