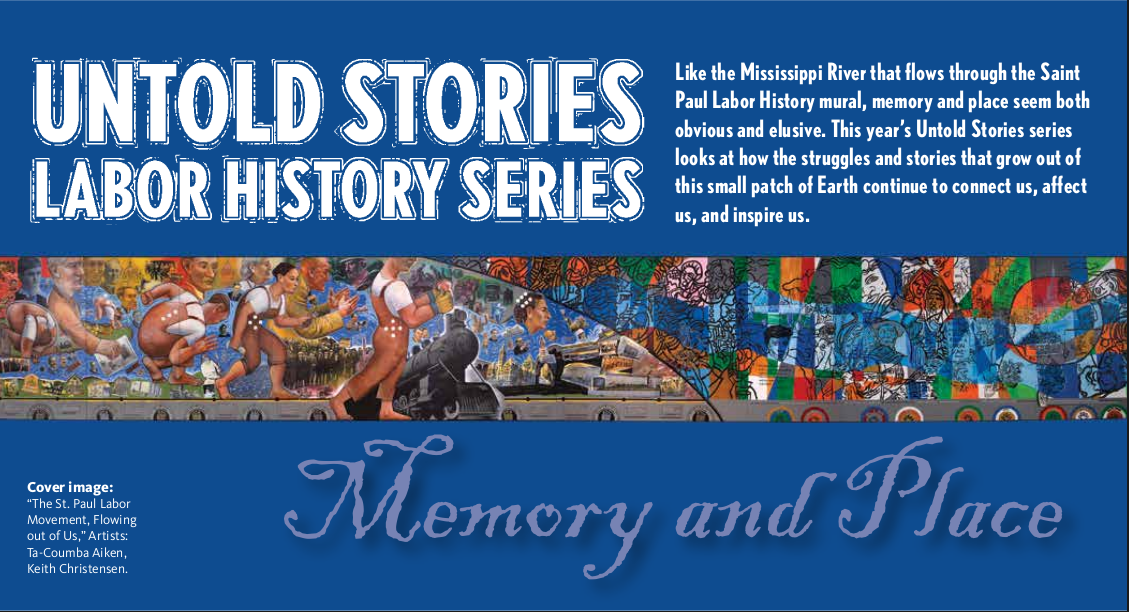 April and May 2014 mark the fifteenth year that the Friends of the Saint Paul Public Library, with the support of labor and community organizations, libraries, churches, bookstores, and foundations, has sponsored a series of labor history programs called “Untold Stories.” Each year a volunteer committee (in which this writer participates ) has organized talks and panel discussions, dramatic readings, films, tours, and singalongs, all free and open to everyone.

This year’s central theme is Memory and Place. The brochure, which features the Saint Paul Labor History Mural designed and painted by Ta-Coumba Aiken and Keith Christensen, explains: “Like the Mississippi River that flows through the Saint Paul Labor History mural, memory and place seem both obvious and elusive. This year’s Untold Stories series looks at how the struggles and stories that grow out of this small patch of Earth continue to connect us, affect us, and inspire us.”

The specific programs offer a wide range of topics that challenge us with difficult and disturbing questions.

“Untold Stories” runs April 22 through May 14. See the Friends of the St. Paul Public Library site for a full listing of events.

What roles did Minnesota’s liberal Democrats play in the dispossession of African American farmers in the era of Civil Rights? Between 1940 and 1975, the number of land-owning Black farmers fell from 681,790 to 45,594, a drop of 93%. How did this happen, particularly at a time when a civil rights discourse and public policy agenda shaped the actions of the federal government? Nationally respected historian Pete Daniel, the former President of the Organization of American Historians and a lead curator at the Smithsonian’s National Museum of American History, will discuss his new book, Dispossession: Discrimination Against African American Farmers in the Age of Civil Rights, at 7PM on Tuesday evening, April 22, at the Minnesota History Center. Daniel and his respondents, a panel of local activists who work on behalf of farmers of color today, will help us to reflect on the lessons of this untold story not just for how we understand the history of African American farmers, the role of the federal government, the rise of Agri-Business, and the fate of the iconic family farmer, but also on how we understand the resilience and abilities of farmers to act on their own behalf.

In recent years, much of the energy in the labor movement has come from two seemingly different quarters: on the one hand, highly-skilled professionals, such as teachers and nurses, and, on the other, low-wage retail, fast food, and service workers. What might be revealed if these two groups were placed in a conversation with each other? Might we learn new ways to think about the challenges of low wages as well as the challenges of unionized workers maintaining “middle class” incomes? On Monday, April 28, at 7PM, a panel from these diverse workplaces, supplemented by scholars and researchers, will hold just such a discussion, at the Saint Paul Labor Center, and we’re all invited to listen and join in.

Two nights later, on Wednesday, April 30, Sisseton Wahpeton Dakota storyteller and media artist Mona Smith will discuss her creation of a “memory map” of the bdote area, where the Mississippi and Minnesota Rivers meet. Smith will introduce the audience to her creative uses of modern technology, particularly an interactive website, as a means to keep alive the memory of this area which is so central to Dakota spirituality and history. What does it mean that much of what is considered “Minnesota history” has taken place on land which was once native peoples’? What roles have native peoples played in the making and remaking of the Minnesota working class? Mona Smith will give her audience an opportunity to consider these important questions.

No “Untold Stories” series would be complete without a labor history tour conceived and led by retired railroad engineer and local labor historian Dave Riehle and retired bus driver Phil Epstein. On Saturday afternoon, May 3, joined by bus driver Diane Ruud, they will take their passengers on an unforgettable trip through the Central Corridor on the eve of its re-emergence in the new era of light rail transit. There is limited seating on the bus, so call 651-222-3242 to reserve a place.

For another eye-opening presentation and conversation, join historian and filmmaker Chad Montrie (University of Massachusetts-Lowell) at 7PM on Wednesday, May 7, at the Merriam Park Library, for the screening of a segment of his new project, Whiteness in Plain View. This film, inspired by James Loewen’s compelling book, Sundown Towns: A Hidden Dimension of American Racism, explores how American towns and suburbs practiced racial exclusion. The segment that Professor Montrie will share with us strikes close to home: an investigation of Austin and Edina, Minnesota, two communities with very different class characteristics but which came to share a whites-only environment. From the very inception of “Untold Stories,” organizers have insisted that weighing the complexities of race is central to understanding stories that have gone untold.

Last year’s “Untold Stories” recognized the 150th anniversary of the Emancipation Proclamation and the 50th anniversary of the March on Washington as foundational events in the development of the American working class. 2014 marks the 50th anniversary of the Civil Rights Act, and University of Wisconsin historian Will Jones will explore the interactions between the labor and civil rights movements in a presentation at 7PM on Monday, Mary 12, at Camphor Memorial United Methodist Church at 585 Fuller Avenue in Saint Paul. Professor Jones is the author of several widely-praised studies of African American workers, and his presentation will be complemented by music and dramatic readings.

The final program returns to the series’ central theme of Memory and Place. There will be major events in Minneapolis this summer marking the 80th anniversary of the 1934 teamsters’ strikes. At 7PM on Wednesday, May 14, at the Merriam Park Library, historian Mary Wingerd, the author of Claiming the City: Politics, Faith, and the Power of Place in Saint Paul and North Country: The Making of Minnesota, will ask “Why Not St. Paul?” Professor Wingerd (Saint Cloud State University) will offer some explanations as to why Saint Paul truckers and warehouse workers did not join in the earth-shaking Minneapolis strikes. In doing so, she will encourage her listeners to think through with her the specific social, economic, political, and cultural factors which – more than the Mississippi River – divided workers’ experiences in the “Twin” Cities.

The “Untold Stories” series asks: why did these stories unfold in these ways? What can the telling of these stories teach us now about class, race, gender, racism, sexism, and the capacity of working people to act on their own behalf to make their lives better? These are crucial questions with significant bearing on how “Untold Stories” audience members understand their own lives and imagine their futures. The format of the programs seeks to involve audience members in discussing, analyzing, and interpreting their own experiences within history.

The “Untold Stories” program is in conversation with more than the particular stories which get told each year. There have been other similar projects within labor history.

At the height of McCarthyism and the Cold War, one of the unions under ferocious attack, the United Electrical, Radio, and Machine Workers of America (UE), sponsored the publication of a new, richly detailed, dramatically written history of working men and women in the United States. This book, Labor’s Untold Story, written by journalists Richard O. Boyer and Herbert M. Morais, has gone through three editions and twenty-six printings. UE leaders and activists, struggling to hold their union together in the face of congressional hearings, FBI investigations, employer hostility, and media red-baiting, thought that exposing their members to labor history would help them understand what was at stake. The UE still exists today, one of the only unions singled out for such a withering assault to have survived.

In the 1970s and 1980s, the academic study of labor history underwent a transformation and renewal. Hundreds of new scholars emerged from graduate programs, published articles and books, and became a new cohort of teachers and professors. In the late 1990s, these historians participated in the establishment of two national organizations: the Labor and Working Class History Association (LAWCHA) and the Working Class Studies Association (WCSA). Both organizations sponsor conferences, newsletters, websites, and journals, all means to the ends of telling untold stories, of understanding why labor’s stories so often have gone untold, and what can be learned from these stories as they are unearthed, shared, and examined through the lens of critical thinking and analysis.