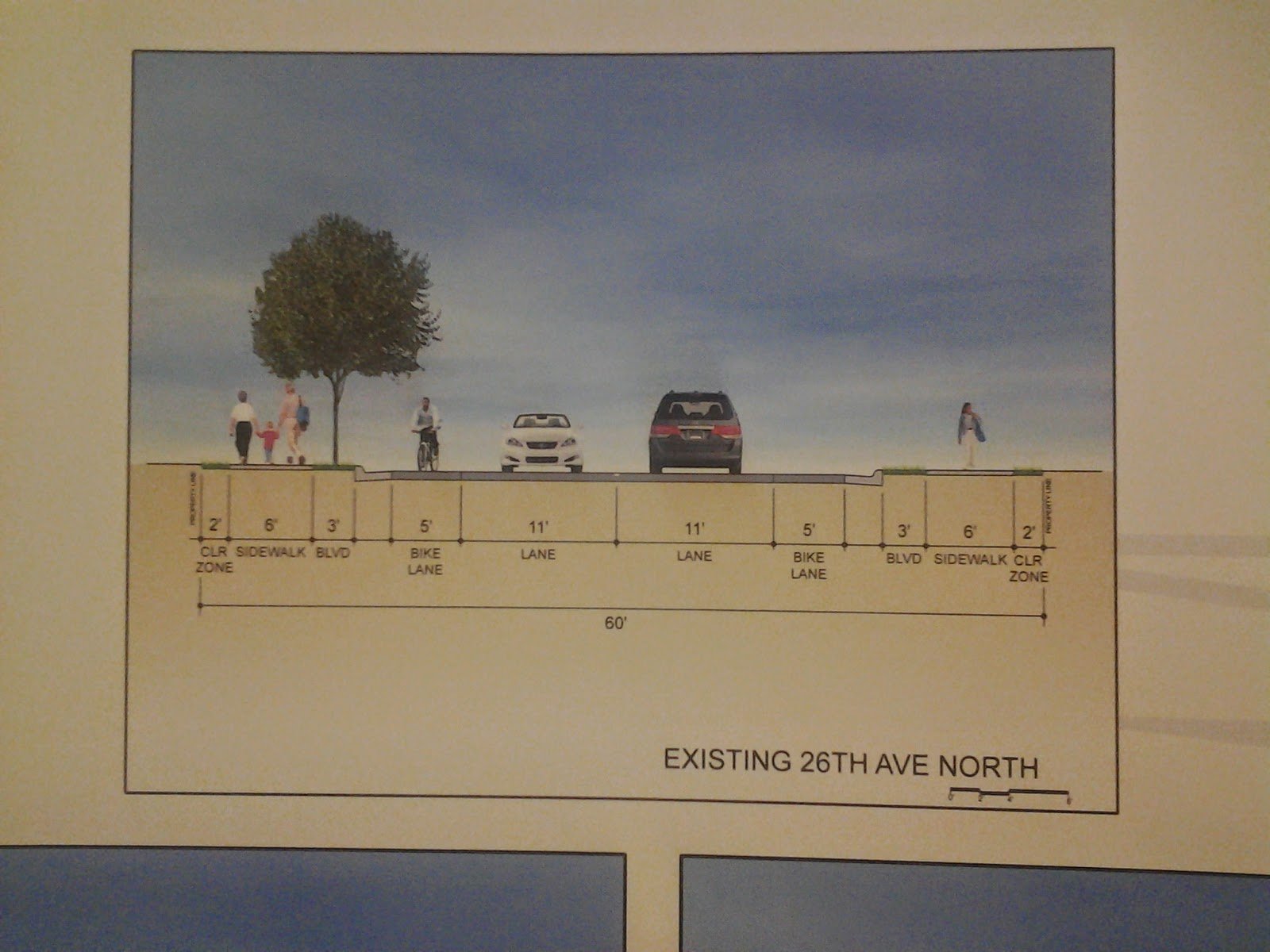 Over the past few weeks, I’ve had the opportunity to attend a neighborhood events where bike path options have been brought forward–a presentation by the city of Minneapolis about 26th Avenue North, and a Jordan Area Community Council listening session on the Humboldt/Irving Avenue proposal. While I could go into elaborate detail about each project, that’s a topic for another post or two. Instead, what intrigues me as of late is the community perception of each plan.

Along 26th, for example, there seemed at the Farview Park gathering to be pretty broad consensus that folks want some kind of bike upgrade to the corridor. That feeling may well be impacted by the sorry state of the avenue as it crumbles away more each day. Furthermore, there is currently no parking between Lyndale and Theo Wirth on 26th. Between Lyndale and the River, some accommodations may have to be made, but overall the loss of parking has already taken effect and settled in.

When 26th is redone over 2014 and 2015, the current configuration of 11-foot car lanes and 5-foot bike lanes in each direction will likely expand. Car lanes are expected to go to thirteen feet, and a 10-foot bike lane will be on one side of the street with a sidewalk for foot traffic on the other side.

The sentiment at the 26th Avenue meeting was that, if anything, this proposal doesn’t go far enough. There is currently no connection from 26th Avenue to the Mississippi River by bike or foot. And although bike lanes kind of zigzag through the industrial area of Hawthorne to the river, there is not a sidewalk that allows pedestrians the same access. Some residents also expressed a desire to see 26th redone all in one year, although a project of that scope is unlikely to get done in less time than the proposed two-year cycle.

There is also a group within Hawthorne at least, that has been pushing for a full greenway with no vehicular traffic. Given the traffic load of the corridor, the overall expense, and that there are a number of properties that would have limited access, a full greenway is unlikely to come out of a 26th Avenue redesign.

In fact, due in large part to pressure from that group of Hawthorne members, several “opportunity points” have been added to the 26th Avenue proposal. These include a possible connection to the Ole Olson park from 26th along the Mississippi River, a sprucing up of the highway overpass so it actually feels somewhat green, public art and an expansion of trails along Farview Park, a wider path by Nellie Stone Johnson School, and more bike and pedestrian amenities at 26th and Theo Wirth Parkway.

When I heard the phrase “opportunity points,” I thought it just sounded like really bad spin for why we were getting substandard amenities once again, but since this is the northside we should be glad we’re getting anything at all. Instead, I was floored by how amazing these developments appear to be. Finally, some concrete steps to connecting the River and 26th!

The big question on everyone’s mind was cost. The city has a formula for determining who pays what, and it generally will come out to about $25 per month extra in taxes for the next twenty years. Well worth it, in my opinion. If new lighting is part of the bikeway, that could increase assessments significantly. (Ideally, the new lighting would go everywhere except in front of my house, since I already have streetlights close by and I’d like to not pay for more.)

One concern brought to me after the meeting was a comparison to the Victory Memorial Parkway and how bumpy that is. I have always thought of that stretch as anything but bumpy, but a neighbor pointed out that I’ve never ridden with a baby in tow. The intersections along Victory Memorial, especially the north/south section, have a significant dip to them, and that causes problems for bikers with a baby on board.

Contrast 26th with the public reception for the Humboldt/Irving Greenway proposals. Much of the sentiment I have witnessed here has been one of fear of losing what people already have. The Humboldt/Irving proposal is comparatively in its infancy. So neighbors haven’t had a chance to get used to its ideas or really understand how various options might affect them. I am, however, seeing real estate listings in Jordan come up advertising themselves as on the Humboldt or Irving Greenway. So clearly some people are seeing the value in the amenity, even if only as a marketing tactic for the time being.

And speaking of sales, one of the psychological cornerstones of sales is that people generally are first afraid to lose what they have and that’s their starting point. So at many neighborhood or online forums, the first question is “What about parking?” Folks understand what they have, and can’t see past that for a broader vision of what could be.

One youth at a Humboldt/Irving meeting brought up an interesting safety concern, that North Commons is an epicenter of young gang activity, and that what amounts to a bike freeway that passes through the area would potentially allow those gangs to spread their territory. I find this a good reason to focus on safety AND bike infrastructure, but not to ignore one for the sake of the other.

So here is my prediction for Humboldt/Irving. We are quite a ways away from breaking ground on a project of such a massive scope. By the time that occurs, much or perhaps all of 26th will have been done. And when we’re ready to go on Humboldt/Irving, some segments will want just a bike boulevard stripe, others will want a full-on greenway, and other parts will want something in between. I think we’ll see at least some in-between bike amenities that mirror 26th get built–maybe even a few blocks of Milwaukee Avenue-stlye greenways here and there.

And when residents can actually see what that looks like, when they can bike or walk along the corridors, and when they see neighbors’ front yards extend to what would normally be the middle of a street, more and more people will want that for themselves. If that’s the route the north/south greenway takes, we could be waiting a generation for it to come to full fruition.

Then again, how long did 26th Avenue take to get to where we are today? I rest my case. 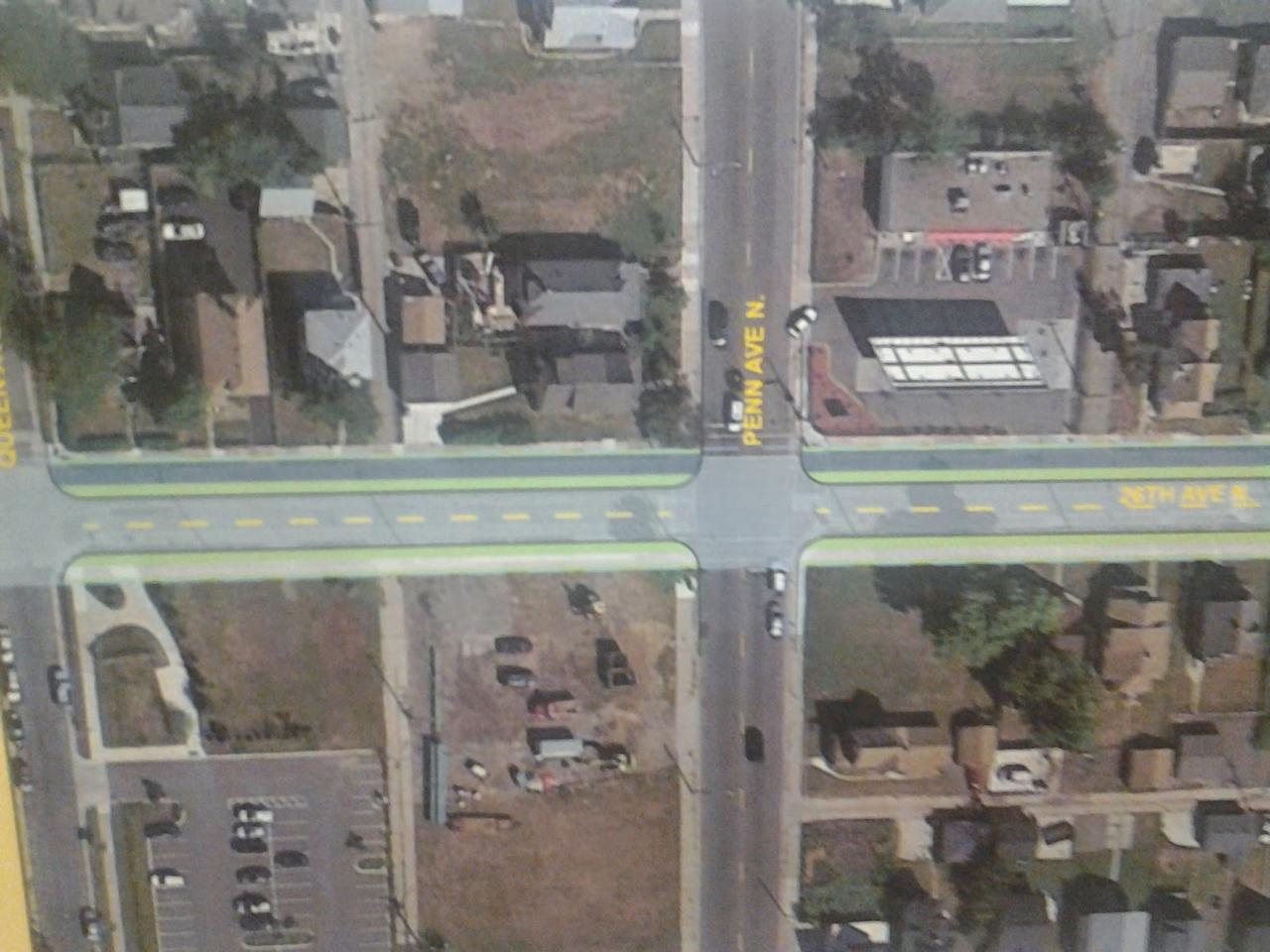 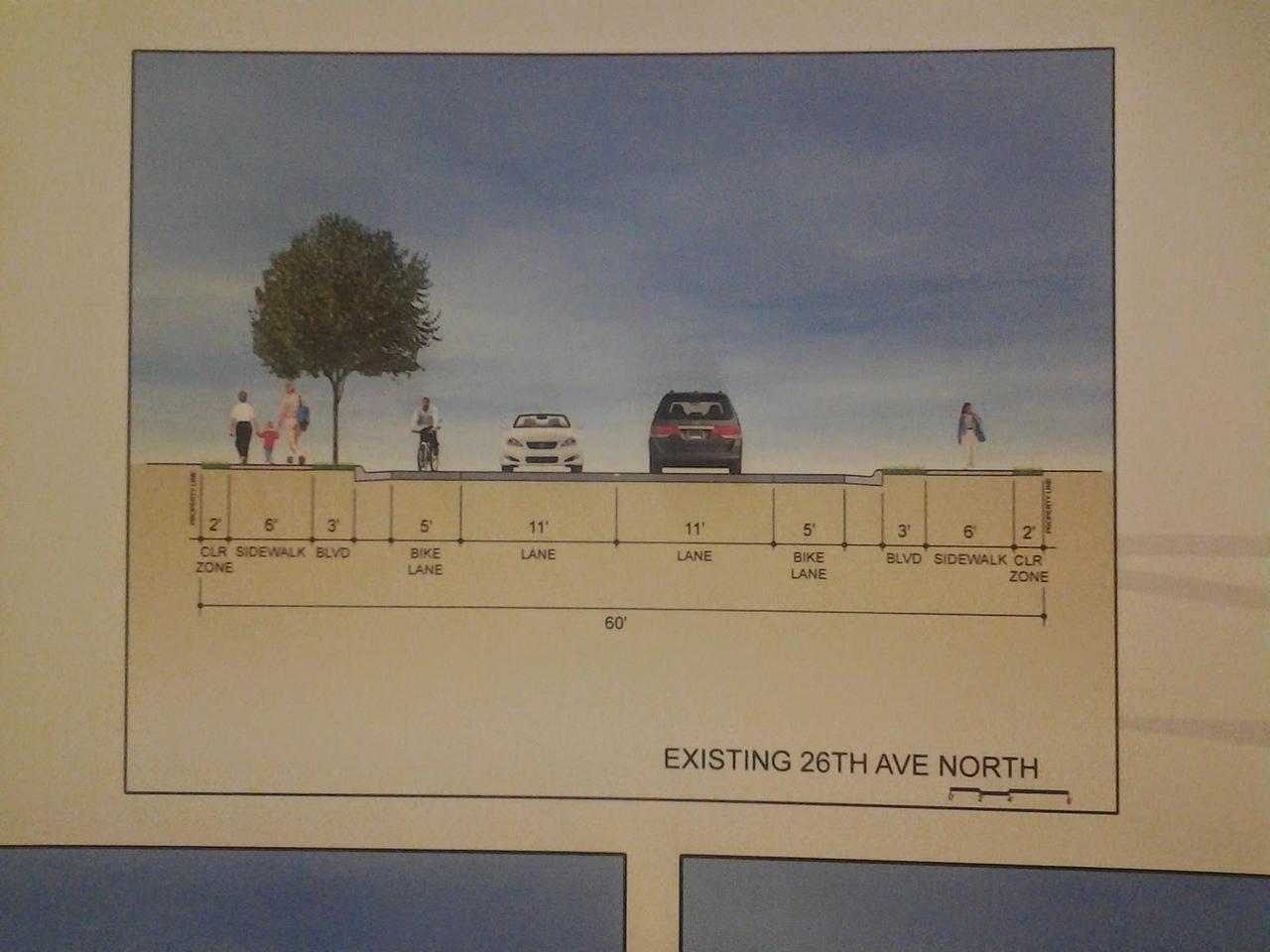