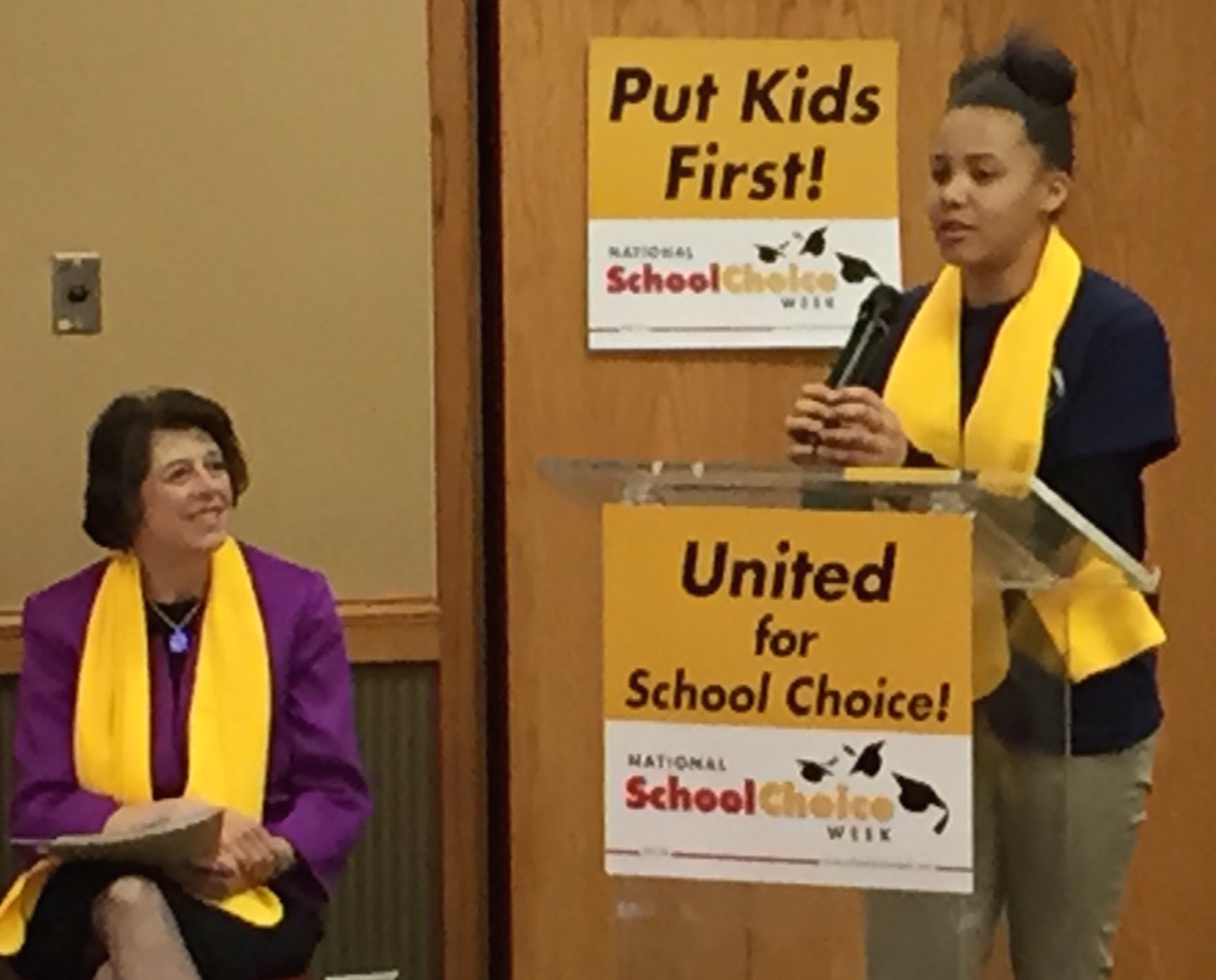 It was quite a bipartisan celebration. From Brainerd, Crystal, Golden Valley, Forest Lake, Princeton and the Twin Cities, students and adults danced, sang and spoke at a meeting in St. Paul on Jan. 28 about the value of Minnesota’s various forms public school choice. The ceremony was part of National School Choice Week, Jan. 25-31.  This meeting focused on various forms of public school choice.

Youngsters from Perpich Arts High School in Golden Valley helped open the program with an enthusiastic dance. The Perpich Center for Arts Education, which will soon celebrate its 30th birthday, is one of the nation’s few statewide public arts high schools. It was the dream of the late Minnesota Gov. Rudy Perpich and his wife, Lola.

Summer Nelson, pictured above, is one of thousands of youngsters who have taken both a Post Secondary Enrollment Options course on a college campus,  and dual-credit courses in high school. Nelson is a student at Community of Peace Academy, a St. Paul charter. I asked her how she felt about earning college credit as a high school student. Nelson grinned and replied, “I love it!”

Livia Wagner and Nate Hansen, seventh-graders from Forest Lake, praised the opportunities they had to learn Spanish in a charter and district public school. They began studying Spanish at Lakes International Language Academy, a charter, in Forest Lake. They’ve continued at Southwest Junior High School, a Forest Lake District school.

After the meeting, Livia’s mother, Melissa Martyr, wrote to me: “I think the short- and long-term values of her learning Spanish in an immersion setting, with IB (International Baccalaureate) curriculum, are immeasurable. She’s got a strong global perspective and she’s a seventh-grader. She sees the opportunity in working with and communicating with people around the world. The value of having a second language, and having it so well developed, is just incredible. It’s remarkable what kids can do when they just have the opportunity. She’s a great student at Southwest, and it’s thanks to everything that she absorbed at LILA.”

Like many charters, LILA has shown dramatic growth from its original enrollment of 174 students in 2004. According to Shannon Peterson, director of the LILA, the school now enrolls more than 800 youngsters in prekindergarten through sixth grade.

Betsy Picciano, point person at Brainerd’s Central Lakes College for dual-credit courses, described various partnerships the college has with school districts. This has helped produce almost 300 youngsters who have earned A.A. degrees as they graduated from high school. These partnerships also have helped thousands of Minnesota youngsters earn college credit while still in high school. Some of this has happened via courses taken on the Central Lakes campus. Most credits were earned in high school classrooms through courses taught by high school faculty working with college professors.

Youngsters at Lionsgate Academy, a charter in Crystal started by parents and educators, closed the program with an enthusiastic dance-rap (watch a video of the performance here: http://tinyurl.com/p4g4xy4).

Rep. Sondra Erickson, R-Princeton, chair of the Minnesota House Education Innovation Committee, told the group: “It is extremely important that parents and students know all the career and college choices offered through Minnesota public schools, both district and charter. The fact that our students today can choose among PSEO, concurrent enrollment, Advanced Placement or CLEP (college level exams) – to name a few – while enrolled in our high schools is the opportunity of a lifetime, one that few other states offer. And think of the tuition saved.”

Demonstrating the bipartisanship that has marked expansion of public school choices in Minnesota, former Minnesota Sens. Ember Reichgott Junge, a Democrat and Gen Olson, a Republican were the masters of ceremonies at the event.

I asked Olson how she felt at the end of the day.   “Deeply gratified,” she replied. “It’s so good to see so many making good use of the options available.”

Reichgott Junge, pictured above with Ms. Nelson,  agreed: “The bipartisan support and students’ creativity show Minnesota at its best.”