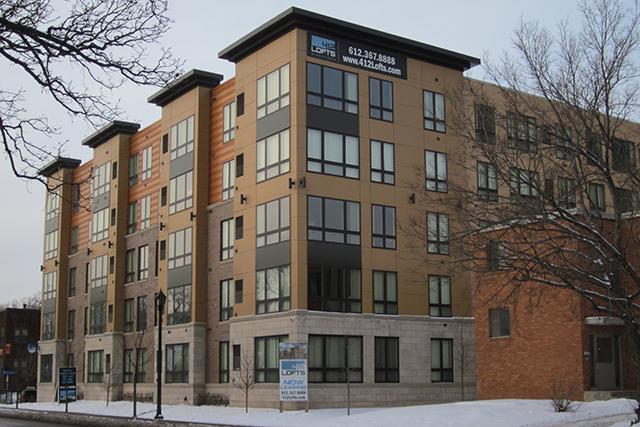 In Minnesota, according to the MHP’s report about the last three months of 2012, “[T]he slowly improving economy bolstered homeowners and the housing industry, but not renters or the homeless.” (MinnPost photo by Corey Anderson)

With emergency shelters swamped last fall, an advocate for the homeless suggested to me the lack of affordable housing in our community could get so bad the homeless might be left to pitch tents.

I took the comment as part hyperbole, but definitely thought-provoking and disturbing and duly reported it.

I’m not saying I believe Minnesotans would let this happen, but I also can’t shake off that thought after reading the quarterly “2×4” Report released this week by the Minnesota Housing Partnership, an organization with a mission of creating and preserving affordable housing for people of low and moderate income.

After all, homelessness has come down to tents elsewhere. I’d turned away in shock to see tents pitched in London parks in 1991 during those low economic times following the first Persian Gulf War and read of them during the Great Recession when tent cities sprang up in the United States.

Only this month, in fact, a tentative agreement was reached between local government and 80 homeless persons who had pitched tents in woods near the Jersey Shore in Lakewood, N.J., some of them living on public land there for several years. The issue: “a dispute about local governments’ responsibility to care for the poor.’’

In Minnesota, according to the MHP’s report about the last three months of 2012, “[T]he slowly improving economy bolstered homeowners and the housing industry, but not renters or the homeless.”

“Between high and rising rents, renter wages which have fallen over the decade and limited job prospects, those struggling to find good jobs, including many people of color have been hit hard,” according to the report. 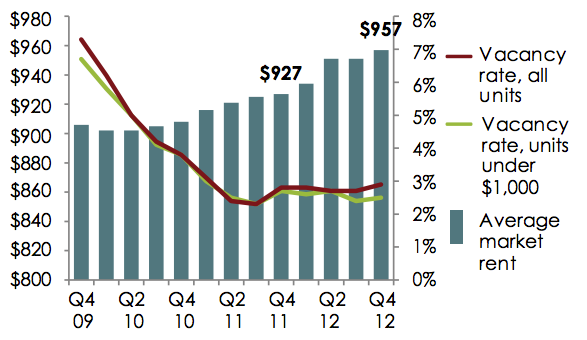 Even as renter wages have fallen, average rents in the Twin Cities have steadily risen. (Courtesy of Minnesota Housing Partnership)

Though Minnesota’s unemployment rate has come down to 5.5 percent from a recession high of 8.5 percent, not all are benefiting, the report notes. A preliminary Wilder Research report this month showed homelessness up about 6 percent since 2009.

Among the high points of the MHP tally, which comes as the Legislature considers increased funding proposed by the Homes for All Coalition — to which MHP belongs — are:

Rents have increased, as have “past due” rents in “non-luxury” apartments.

On the bright side, mortgage delinquency rates, pre-foreclosure notices and foreclosures are “trending downwards.”