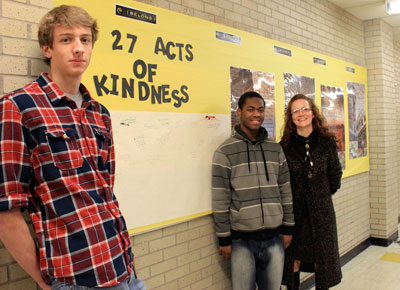 In the aftermath of the Sandy Hook Elementary School shooting in December, Como Park Senior High School counselor Molly McCurdy found herself searching for some way to help students at her school address the tragedy.

In mid-January, she launched the 27 Acts of Kindness project to honor the 27 people killed by the Newtown, Conn., shooter. The project challenges Como’s staff and students to do 27 kind things through the year and make a record of it. An Act of Kindness board has been put up in the school’s Commons and the school community is being encouraged to write down their kind acts on the board.

Senior Joe Krivit has helped get the news out on the school’s morning television show by interviewing students who are participating. His first interview was with junior Leandre Benion (aka “Rev”) who recently helped his mom by paying for his sister’s birthday party.

Benion works at Cub Foods and spent his own money to buy a cake and presents for his sister’s golden birthday on Jan. 14. (“It was a Justin Bieber cake,” he said, and then smiled: “She wouldn’t let anybody eat the face.”)

After the Dec. 14 shooting in Connecticut, it seemed taboo to talk about it at school, Krivit said. “A lot of teachers here wouldn’t talk about it,” he said, because they didn’t want to upset students.

McCurdy’s view on dealing with such a horrible tragedy is to promote what’s positive in our society. “All we’re hearing about now is gun control,” she said. “It’s a complex issue; just banning guns isn’t the only answer. We need to address the violence, the Twitter, the Facebook, the videogames—and do anything we can do that is positive.”

At press time, the project was in its infancy, but McCurdy hopes that momentum will build and students and staff will think about what it means to be kind and ask themselves what they are doing to promote kindness—like “saying hello to someone who’s isolated in the lunchroom or shoveling a walkway” for someone—and then ask themselves, “What else can I be doing?”