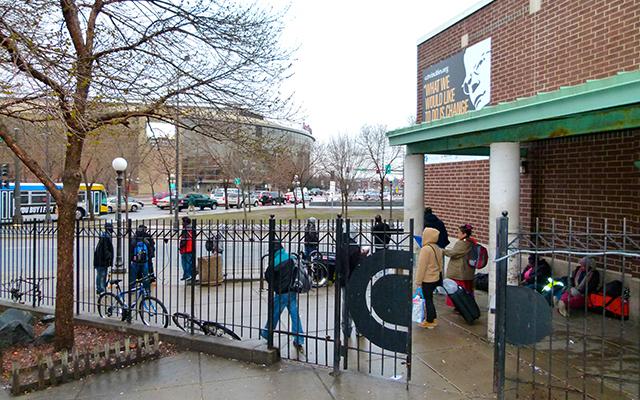 Many cities have familiar gateways: St. Louis, has its Arch; San Francisco, the Golden Gate Bridge; New York City, the Statute of Liberty.

St. Paul? A wrought-iron fenced courtyard and a modest building where the hungry and homeless gather in lines outside seeking food and shelter.

Run by Catholic Charities of St. Paul and Minneapolis, the Dorothy Day Center has long been an esteemed fixture in downtown St. Paul, where — situated on its western flank — it’s an ever-present reminder of need and the stalwarts who step up to help.

Still, the facility on Old Sixth Street provides a shocking contrast to the city’s successful entertainment and sports venue, Xcel Energy Center across the street, which attracts 1.5 million visitors a year. And nearby, prestigious Children’s Hospital cares for Minnesota’s children.

The homeless cast a guilt-inducing shadow on the neighborhood. (Remember the 2008 Republican National Convention when those food lines were screened from delegates’ view?)

“Dorothy Day Center has changed and evolved. So, too has this neighborhood,’’ explains Matt Kramer, president of the St. Paul Area Chamber of Commerce and a Catholic Charities board member.

Acknowledging these changes, St. Paul Mayor Chris Coleman today (May 2), at a breakfast celebrating the center’s 32 years of service, will announce a task force to look into the center’s future.

With a budget of more than $2.5 million, the center meets the needs of 81 percent of the homeless individuals in Ramsey County, including single women and teens, authorities say.

So this won’t be a discussion about whether the services should “go away,’’ says Kramer, but rather the opportunity to analyze whether the “current footprint” at the downtown’s front gate fulfills today’s needs and answer significant questions:

Is the space “conducive to the dignity of the people receiving services?” Should there be a new facility at the same site or a new location, say, one closer to new light rail stations?

Thirty-two years ago the center was not a shelter, but a place for 50 homeless persons to drop by for a free cup of coffee and a day-old sweet roll. Last year, the center served 6,300 needy persons, providing 213,000 hot meals, 63,000 beds for a night and access to medical and mental-health services.

The task force will be chaired by Coleman, Kramer and Carleen Rhodes, president of Minnesota Philanthropy Partners, and include homeless experts and advocates and other community representatives.

Over time “the need has intensified and the space just isn’t suitable,” says Nancy Homans, policy director for the mayor, explaining that the drop-in center evolved into a crowded overnight shelter that often houses inebriated persons and those with significant mental illnesses.

When the center was built community partners wanted to show “this is a city that cares about the homeless,’’ Homans says, not hiding them away, but creating a “nice place” for them.

Now, crowding and the building’s age have city health and fire inspectors concerned. “I’m not sure the message we’re giving the world is so positive anymore. Here there’s a sense of being stuck,’’ Homans said.

Nights, 200 thin sleeping mats lay six inches apart on the floor. Walkers and an occasional electric wheel chair dot the room. Stacks of tables and chairs serve as walls separating the men from the women.

Days, mats are put away and chairs set up in clusters around the space. At 9 a.m., like long-distance travelers ready to board the bus, the city’s needy enter with bulky bundles and suitcases on wheels stuffed with all their belongings. Only, this multi-hued crowd of young and old is waiting their turn for access to medical services, mental health programming or a grocery bag of emergency food.

Upstairs and next door are additional beds. The overflow building needs a major and costly renovation to be in compliance with city building and safety codes.

“How many Band-Aids, how many patches are we going to do to facilitate requests for shelter?” asks Gerry Lauer, program director at the center. In warm weather, the homeless sometimes pitch tents outside the building.

“The bigger question,” he says, “is: ‘What are we going to do with the homeless in the city of St. Paul and Ramsey County?’’’

There are successful models. Across the Mississippi in Minneapolis, Catholic Charities and a consortium of other groups last summer opened Higher Ground, a $14.25 million facility offering emergency shelter beds, 336 housing units and support services.

“We think Higher Ground is achieving tremendous success and it is fulfilling the vision we had for it in Minneapolis,’’ says Tim Marx, Catholic Charities CEO. Whether the same or a similar model is right for St. Paul should be part of the discussion, says Marx, who is also a member of the exploratory group.

He says the discussion will be broad, spanning the need for emergency shelter, supportive services and permanent housing solutions, with a goal of a permanent pathway out of poverty.

Upstairs at Dorothy Day, home for Kelly Brown, is a bunk bed spread with a quilt, two gray bins filled with her stuff and storage space down the hall.

Since September of last year, the strawberry blonde has shared the safe oasis with 31 other women biding their time until they can find boarding rooms or affordable apartments elsewhere. Nearby are 10 short-term bunk beds for women.

A college graduate who did office work for more than 30 years until she was laid off, Brown moved to St. Paul from Austin, Texas, on the promise of a job.

“The face of homelessness has changed,’’ Brown, 53, says over a mug of coffee at a small round table.

“We’re not all chemically dependent or mentally ill. Some of us are professionals who got sucked into hard times. Say ‘homeless’ and people get the mental image of some guy laying in the gutter with a bottle. We have some intelligent, articulate women here,’’ she says.

In fact, “it’s kind of like a sorority, a middle-age sorority,’’ she says with a smile, and respite from the sometimes unruly people with chemical-dependency and mental-health issues sleeping on mats downstairs.

Still, it’s only a stopping-off place until she can find permanent housing, she says.That will be easier now that she qualifies for Social Security disability checks, even though low-income housing is scarce in the Twin Cities. She’s added her name to long waiting lists.

Outside the center, before the doors open for the day, I talk with Rock Krueger, 53, who’s perched on his bags and a bedroll, rolling a cigarette.

He tells me he’s a regular there, though “their feeding is lousy,’’ that he can’t find a safe permanent place to live, that he’s held 18 different jobs in his life, that he is on medication to help him cope with a childhood in foster care.

He’s there for the coffee.