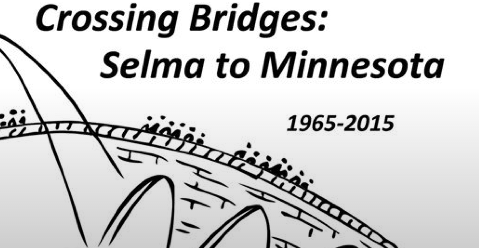 The public is invited to participate in a march to commemorate the 50th anniversary of the historic and bloody Selma marches of 1965, catalytic events that led to the passage of the U.S. Voting Rights Act.

Cheryl Chatman, Executive Vice President and Dean of Diversity at Concordia University-St. Paul, one of the organizers, said that many local religious, academic, and civil rights institutions have come together to plan the march. “We feel it is critically important to remember this major turning point in the U.S. Civil Rights struggle—and to underscore the Civil Rights work that still needs to be done,” she said.

People interested in joining the march are asked to arrive at the Minnesota State Capitol at 2 p.m. Sunday, March 8, for a brief introductory program. The half-mile route will cross the Cedar Street Bridge over I-94, recalling the Selma marchers who crossed the Edmund Pettus Bridge en route to protest laws and practices that denied black people the right to vote. The St. Paul march will end at Central Presbyterian, 500 Cedar Street, followed by a program at the church beginning approximately 3 p.m. Information on the event also is available on our Crossing Bridges MN website: http://crossingbridgesmn.com/ , facebook page: selma to mn: 50th anniversary march.